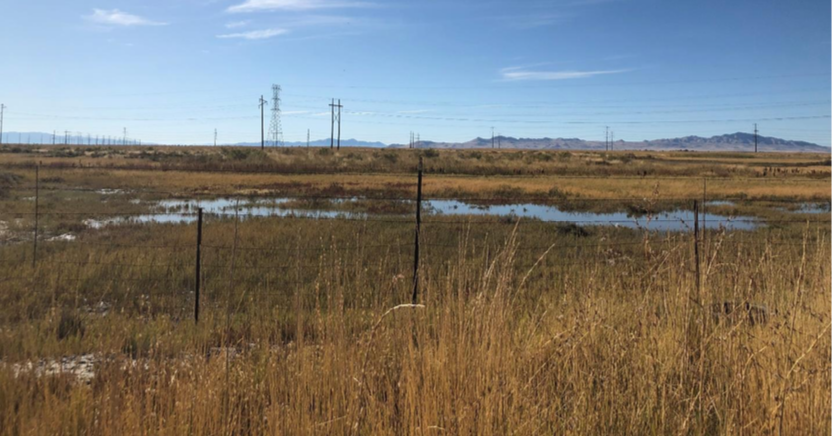 The Swaner family – whose distant relatives created the 1200-acre nature preserve in Snyderville Basin north of Park City – has decided to sell for development 439 acres of open space it owns on the southeastern shore of the Great Salt Lake.

Ivory Development, who has the property under contract, intends to build a sprawling business park it calls “Research Park West.”

The property is bordered by the Salt Lake City Airport on the south, on the east by 2200 West and on the west by 3200 West. The northern boundary is in North Salt Lake (by Salt Lake City coordinates it would be approximately 3500 North). The property is over a mile wide and nearly and mile and a half north to south.

Salt Lake City planning officials advanced a positive recommendation to the Planning Commission on Ivory’s request to create a new BP-Business Park overlay zone that would apply to the property. This despite the property’s location in open space and immediately adjacent to critical wildlife habitat.

Research Park “East” as a model?

The University of Utah’s Research Park is 320 acres and employs over 7500 people. It hosts a remarkable concentration of bioscience companies, including Myriad Genetics, BioFire Diagnostics, and ARUP Laboratories. Huntsman Chemical Corporation’s headquarters is also located there.

Designed in a sprawling, suburban development pattern, the U. of U.’s Research Park has historically struggled with traffic and parking. It has attempted recently to incorporate more active transportation infrastructure.

Research Park has significant developable space remaining, as evidenced by its many surface parking lots and several construction projects currrently under way. Why a “Research Park West” is needed isn’t entirely clear.

Ivory’s Wade Budge described their goal to the Salt Lake City Planning Commission this month: “How can we make it so that current tenants of Research Park who want to relocate have a place to go to stay in Salt Lake City?”

While no agreement exists between Ivory and the U., Ivory is working to establish those linkages. Bryon Prince, who is the lead for Ivory’s efforts, told the Planning Commission that control of the site would be split between the Utah System of Higher Education (USHE), the University of Utah Board of Regents, and the Ivory Foundation.

He also stated that all operating profits from Ivory’s side will be donated for higher education scholarships. Prince declined multiple requests for comment from Building Salt Lake.

University of Utah Communications Director Christopher Nelson confirmed USHE’s involvement with Ivory and stated “the University is not part of this deal as a separate entity.” He offered that there is “potentially some participation down the road from the U., but nothing [is] finalized.”

Ivory is asking for a new zoning overlay for BP Business Park zoning. It would create more flexibility in current BP zoning requirements, allowing adjustments not only for their business model but for the environmental sensitivity of the area.

Ivory’s rezone request received significant response from wildlife advocates and nearby neighbors. The Westpointe community council praised the developers for changing their initial plans to seek M-1 Manufacturing zoning for the parcel, which would have allowed more impactful and, for the neighbors, nuisance uses.

Advocates – including the duck clubs, Audubon society, and Friends of the Great Salt Lake – drew attention to the millions of birds (250 species) whose migration corridor depends on the area abutting the Swaner/Ivory property.

The Rudy Reclamation and Sportsmen’s Club, the property’s immediate neighbors to the west, wrote of the “fertile crescent of freshwater marshes and adjacent salt-loving vegetated mudflats that curve[s] roughly from Saltair on the south to the Promontory Peninsula on the north.”

“The habitat in this crescent plays an outsize part in preserving the lake’s critical wildlife role. Without it the lake would be wholly unsuitable for sustaining the overwhelming majority of bird life,” Rudy’s letter stated.

Many commenters were concerned about the height, location, and functions of the buildings on the west side of the Swaner/Ivory property. A frequent suggestion was to increase the buffer area and the height of a proposed berm between the Ivory buildings and the duck club property.

Rudy’s was also concerned about losing the fresh water that currently flows to the playas and wetlands on its property from the east.

There are currently seven acres of wetlands on the 439 acres of the Swaner/Ivory property.

With the exception of Denise Payne, who lives along 2200 West, the public comment was resigned to the development of the large parcel. At the open house held by the planning department, Payne wrote “Why don’t you change it to open space? Don’t we have enough pollution? Not to mention the Inland Port.”

Why not keep it open space?

No one would call the pattern of development created by business parks “smart growth.” Typically auto-dependent and isolated from commercial and residential uses, they are significant trip-generators.

When Building Salt Lake asked Salt Lake City Planning Director Nick Norris about the wisdom of including them in city code, he wrote “In this context, the primary purpose of the BP zone is to establish economically viable uses in an area where land use is impacted by the airport.”

The airport flightpath overlay zone, which encompasses the Swaner-Ivory property, is a no-build zone for residences in city policy. While developers occasionally challenge this, airport officials point to FAA noise guidelines and the barrage of noise complaints received by airports in other parts of the country which are located adjacent to residential uses.

The bottom line, according to Norris, is that property owners are vested with a right to a “reasonable, economically-viable use” of their land. If the city were to rezone the Swaner/Ivory property OS-Open Space, it would be a “regulatory taking” and require the city to compensate the owners.

Utah Open Lands, a non-profit land trust which purchases conservation easements to save open space from development, has not been active along the Great Salt Lake.