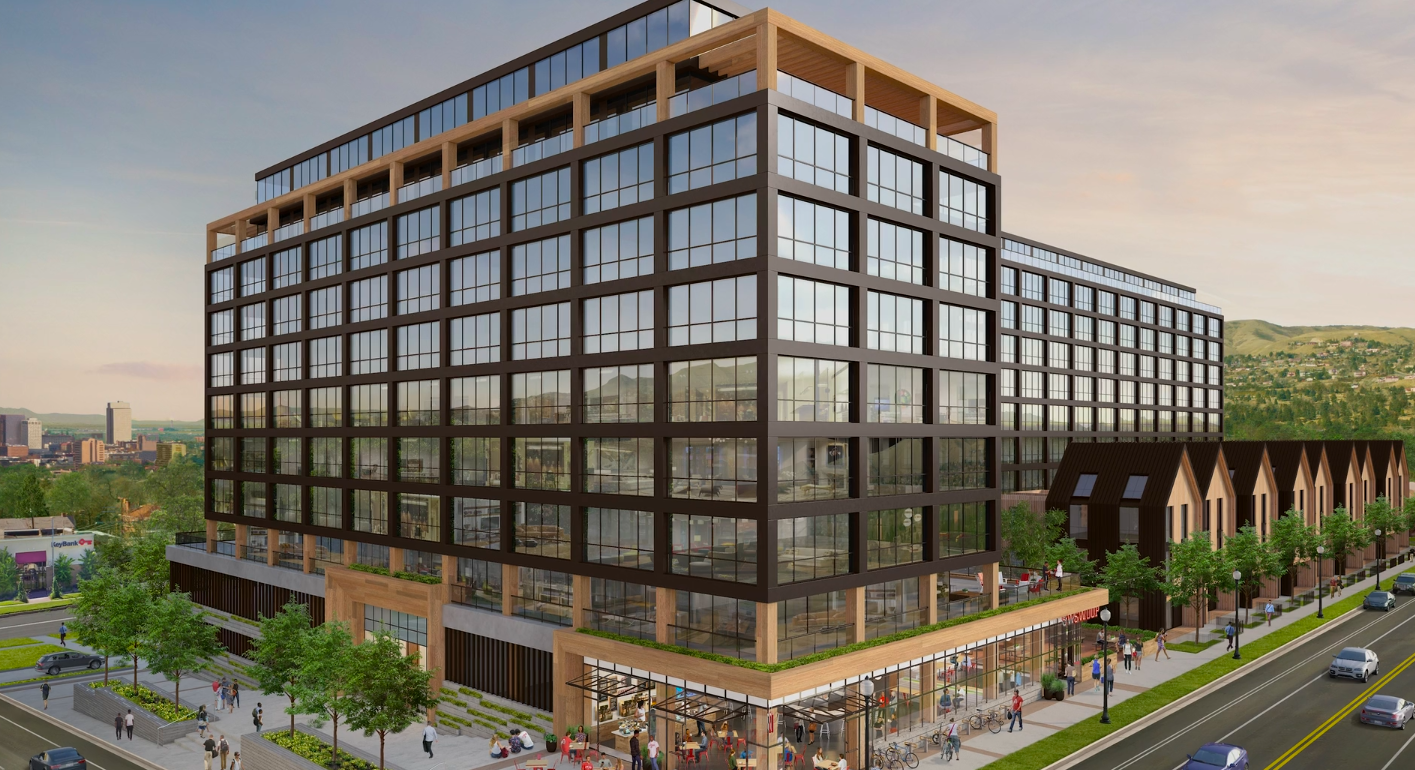 In a city increasingly marked by concrete podium and wood-frame buildings, a new construction technique is coming to town that may help change the landscape.

Mass timber is cheaper and less environmentally harmful than concrete and steel. Carbon dioxide emissions from the building industry account for about 40 percent of global CO2 release.

Mass timber has been built to 18 stories in other countries, but its greatest potential in Utah seems to be in the 6-12 story range – given regulatory height limits in the city and expensive highrise building code that kicks in when a structure’s top story begins at 75 ft or higher.

Whether developers, architects, and construction professionals will embrace the new technology is mostly a question of cost and the regulatory environment. Two projects are looking to test the waters in Salt Lake City. One is imminent, the other is in its preliminary stage.

Mass timber posts, beams, and panels are factory pressed and glued thin layers of trees. They are strong enough to be built to 18 stories, and perform well in seismic events. As they become mass manufactured, their cost is expected to be significantly lower than concrete and steel.

Construction time is also quicker. Foundation costs are less with the absence of a podium for structured parking.

Cross-laminated timber (CLT) is the most well-known mass timber product. The latest structure of Giv Development’s Project Open will be using a product called Mass Plywood Product, or MPP.

Harbor Bay, the Chicago-area company wading into the waters of university-neighborhood land use politics in Salt Lake City, is floating a 10-12 story mass timber, likely mixed-use, all-studio project (with townhomes along one street frontage)

The site is at the northwest corner of University Street (1350 E) and 300 South. It is currently zoned RMF-30 and R-2. It would need a zoning change to TSA station area core to build to 125 ft.

It is also in the University Local Historic District, which largely prevents the demolition of “contributing structures.”

There is currently no transit station area zoning around the Stadium Trax station.

Harbor Bay representatives point to their project currently under construction in Cleveland as the model for Salt Lake.

Intro SLC would be an investment in the vicinity of $125 million, and be built to LEED Gold standards.

Giv Development’s Chris Parker is keeping their designs for the latest piece of Project Open under wraps until “later in May.” Here’s what we know.

At 529 W 400 North on .31 acre, Project Open Phase 3 will be seven stories of mass timber. It sits on TSA-UC-T Transit Station Area-Urban Core-Transition zoning, allowing 60 ft (plus one story) in height.

Parker notes that the building’s footprint is considerably less than its lot size, providing “27 units on a fairly standard single family home lot width.” That allows “real density without a podium structure,” which Giv hopes will be the “greenest install and operation” in the region.

Instead of being underground or podiumed, Open 3’s parking is likely to be carported on the surface, with solar panels to help offset the building’s energy uses. A similar system is used at Artspace Solar Gardens, Parker said.