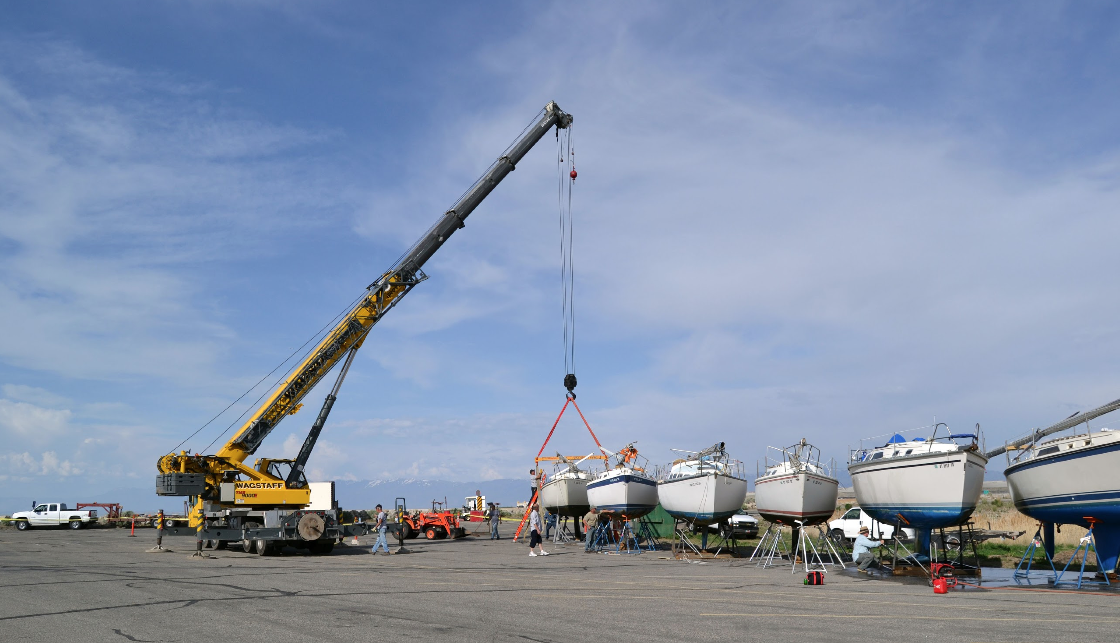 “This is my home, where I feel comfortable, and it’s been taken away from me. I don’t like being on dirt,” said Prince. “I’m half tempted to go dig a hole, fill it with water, put my boat in there and be happy.”

The water level at the Great Salt Lake is at near record lows.   According to the U.S. Geological Survey’s Utah Water Science Center, the lake is currently at 4194 feet.  That is just three feet above the record low of 4191.35, set in 1961.

The extremely low lake levels have forced boats out of the marina, including Prince’s 30 foot sailboat.  Marina owners, with the help of the Coast Guard Auxiliary and an 80-foot crane, removed 80 boats from the marina over a two-day period in April.

Dropping water levels have threatened the lake’s sailing community for years, leaving many boats stuck in the mud in their slips. After the second driest winter on record, members of the Great Salt Lake Yacht Club, fearing the loss of their 140 year old sailing tradition, increased lobbying efforts for state funds to dredge the marina.  The yacht club and marina owners convinced state legislatures of the need to deepen the marina, with the 2015 Utah State Legislature allocating $1.5 million to dredge the marina over the summer.

The plans require all boats with a draft of over three feet to be removed from the lake. Falling water levels throughout the summer would otherwise leave these boats’ keels buried in the mud, preventing engineers from dredging beneath them. The area surrounding the launch ramp is one of the shallowest parts of the marina, which means that for larger boats, the only option is to be lifted out.

Prince and his wife will be moving into a room at a friend’s home through the summer. Other live-aboards (people living in their boats) will be relocating to campers while dredging is underway.

More boats still need to removed from the marina, with 40 boats expected to be removed in May. By early summer, 280 to 300 of the marina’s 320 slips will be empty.

The marina has converted much of its parking lot to boat storage, where most of the boats will sit through the summer.  The removal of the boats will cost the state revenue typically accrued through slip fees at Saltair Beach State Park.

“It’s gonna hurt,” said Harbormaster Dave Shearer. “But mother nature killed us.  If we’d had a regular snowpack, we’d have only had to pull three or four boats out for dredging.”

What hurts boat owners the most is the blow to the Great Salt Lake’s sailing community.

“We’re all one big family,” said Cathy Schoney, who has been sailing on the lake for over two decades. “Everybody supports each other. If you need help, someone will help you out.”

Schoney’s son began sailing in the junior racing program 20 years ago, and the community has been a big part of their lives since.  Schoney will be taking her boat to Oregon, and plans to keep it there for the foreseeable future.

Despite the frustrations, most boat owners are excited that dredging is finally happening and are hopeful that it will be enough to allow sailing to continue at the Great Salt Lake.

“We’ll need to dredge down at least ten feet to get through the next two years,” Shearer estimates.  With the current drought conditions, Shearer doesn’t expect the lake to go up any time soon. “The reservoir is going to be so dry it’ll take every drop of water. We’d need 150% snowpack or more for the lake to go up in the next couple of years.”

Even with Utah snowpack levels at 32 percent of normal, Shearer is optimistic for the long-term health of the lake. He expects lake levels to begin going up after 2017.

“It’s just weather pattern,” said Shearer. “You can talk about global warming, but look at how hard the East Coast got hit this year. It’s all about where the storm tracks go.”

Shearer hopes that most boats will be back in the water by fall or early winter of this year.

Some boat owners don’t share his optimism, though, and are selling or permanently moving their boats. “It’s sad,” said Shoney, whose boat sits on its trailer awaiting the move to Oregon. “This place is home. I don’t want to see it go away.”

Stephanie Long is originally from Pittsburgh, Pennsylvania. Before moving to Salt Lake City, she worked as an ESL teacher in Taiwan, a tour guide, a wilderness mentor and a freelance writer. As an avid hiker, boater, and rock climber, she is passionate about issues affecting Salt Lake City and the surrounding environment.