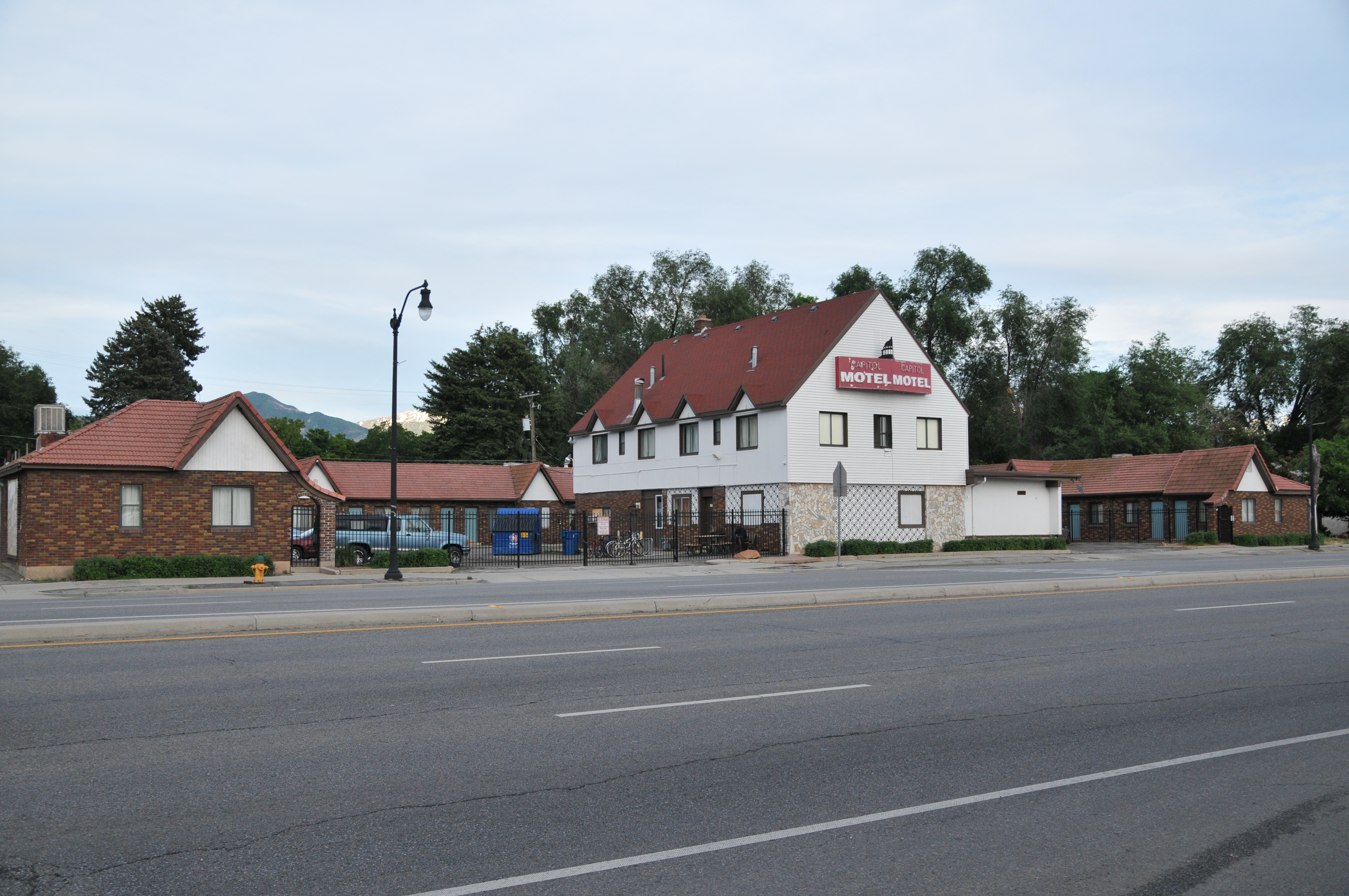 Salt Lake City is set to see the replacement of a notorious and historic motel on State Street.

West Liberty Wells, on the south end of the rapidly developing Ballpark neighborhood, could see a mixed-income, deeply affordable and mixed-use project built at the Capitol Motel site by late next fall.

The Housing Authority of Salt Lake City (HASLC) bought the Capitol Motel last year and quickly began renting it out at $380 per month for a studio, $480 for a one-bedroom and $580 for a two-bedroom. The units filled up quickly.

That conversion was temporary, as the authority tasked with overseeing housing development of all kinds in Salt Lake City assembled financing for a larger, $18.5 million project at the former motel at 1749 S. State Street.

The latest renderings by Salt Lake City-based Method Studio and details provided by the Housing Authority detail what could become an affordable urban, mixed-use residential development that is currently rare in the city (and rarer in surrounding Salt Lake suburbs).

The proposed project would sit on the western border of Liberty Wells less than a block south of 1700 South. It will be near where the Ballpark neighborhood is on the cusp of residential and commercial development that will add hundreds more people to the neighborhood in the coming years, although the Capitol Homes project would far eclipse by size all others in the area.

The 93-unit project would include 11 units (12% of the project) that are affordable for someone making between 0-30% of a median income (AMI) for the Salt Lake City-Ogden area to afford without spending more than a third of his or her monthly pay. That’s a salary of up to $16,800 for someone single or up to $24,000 for a four-person family.

The four-story building would include space fronting State Street for four local businesses to lease, an opening that may prove difficult on the auto-centric road that’s operated largely as a highway.

On-grade vehicle parking would exist at a ratio of .49 spaces per dwelling, the renderings show. It would be split with one entry from State Street and another from Wilson Avenue, which dead ends into the site’s west end.

While UDOT continues to resist adding bicycle infrastructure or dedicated bus lanes on State Street, there is a UTA bus stop less than a block from the proposed site that is serviced at 15-minute intervals. People on bikes could exit headed east on Wilson Avenue, which dead-ends into the proposed project, and head east or west on 1700 South toward painted routes.

The existing motel still includes a historic sign from the building’s earlier days as a travel motel off of US-89 (State Street) in the pre-Interstate era. In recent memory it’s a motel with a history of attracting crime that’s been converted into a de-facto single-room occupancy (SRO) apartment site with more than three-dozen units.

The HomeInn, which also operates the Rio Grande Motel SRO housing on 300 South in Downtown, has had an around-the-clock presence to provide security for tenants and prevent public intoxication and drug use at the site.

The Capitol Homes apartments, which are scheduled for construction in fall 2020, would be built with federal tax credit funding and has already received funding from the Salt Lake City Redevelopment Agency to help buy the land.

As part of the funding agreement with the city, and out of a statewide push to generate truly affordable housing for all kinds of renters, the project is designed to include five units specifically serving the formerly homeless. Another five would serve victims of domestic violence, and four would be set aside for veterans.

If the project moves forward, it would join another mixed-income project recently built by HASLC, the 9th East Lofts at 400 S. 900 E. The Housing Authority also owns and operates Freedom Landing on North Temple, and Sunrise Metro on 500 West and 600 South.

City planners have tentatively identified the area surrounding State Street as one of several that would allow micro-apartments (single-occupancy rooms or SROs), in a proposed ordinance that would largely leave the low-income units out of wealthier areas of town like 9th & 9th, the Avenues and the East Bench.

City policy seeks to disperse low-income housing citywide. It can be easier, however, to move projects ahead in lower income parts of town.