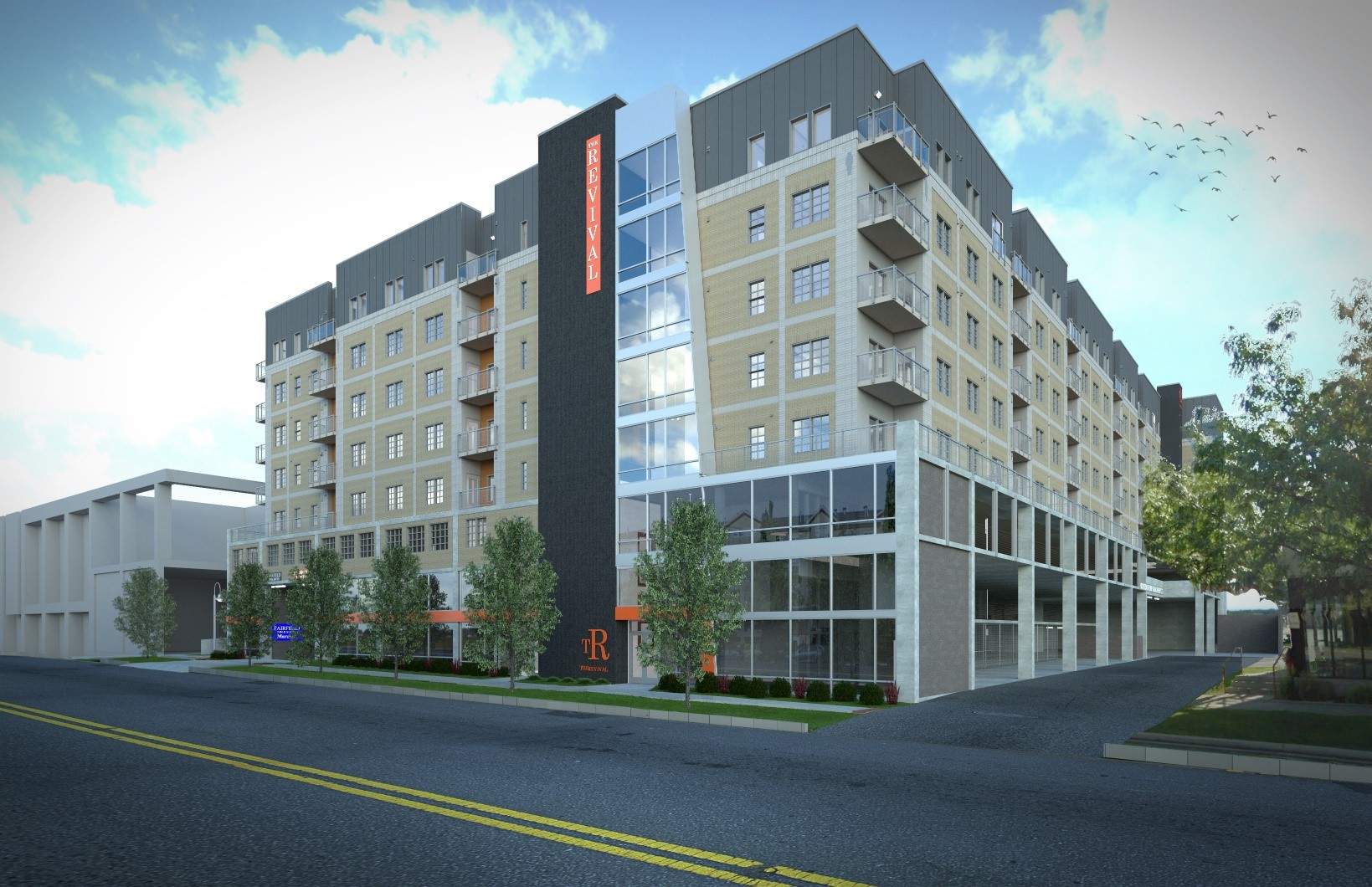 Market-rate apartment construction in Downtown Salt Lake City will see another start this summer, when PEG Development breaks ground on The Revival, just behind the NE corner of 400 South and 200 West.

Simply Sushi and Ibiza nightclub occupy a one-story retail space on the NE corner of the 400 S. 200 W. intersection. That building will remain. PEG will build to the north on surface parking lots and demolish one building on 200 West, currently occupied by RestoreFX, an auto body shop.

In addition, the project will add a one-story retail space of 1700 SF, directly east of Ibiza fronting 400 South. The owners are looking for a fast-casual dining establishment.

Three buildings total will be demolished for the new project.

In the midst of what looks like an extended pandemic and certain recession, PEG is bullish on building its residential portfolio.

“Even in light of the current economic outlook, PEG is confident in the downtown Salt Lake multifamily market,” Matt Krambule, manager of the project, told Building Salt Lake.

Downtown, PEG recently completed the Milagro apartments on 200 South between 200 and 300 West, and the AC Marriott Hotel at 200 South and 200 West.

Krambule noted “As a hospitality developer, we are seeing the effects of travel reductions on our hotels across the country.”

The Revival is a 142-unit market-rate apartment project on D-1 and D-3 zoning, currently under permitting review at the city.

Part of that new retail will front 200 West. One-third of the building’s ground floor will be occupied by its leasing office, and the rest will be taken up by a 400 SF retail space and a parking entrance.

PEG is reserving window space for a significant art display facing 200 West. It will also construct a segment of a mid-block walkway, as specified in the Downtown master plan and Downtown zoning requirements.

The project is set to break ground in Summer 2020 and be completed Summer 2022.

Pioneer Park is only a block away, where redevelopment efforts continue in all directions. Broadway (300 South) has seen significant public and private investment in the last two decades. In South downtown, the Granary District and Central 9th have been attracting robust residential and office investment.

In The Revival’s immediate area are Get Out Games, the Downtown Utah State Liquor Store anchoring the SW corner, and the back parking lot of the Sheraton Hotel fronting a largely dead stretch of street on the southeast side of 400 South.

200 West sports one of the city’s few protected bike lanes. In addition, the 300 South/Broadway protected bike lane is less than a block away. However, proximity to 400 South, a UDOT highway, and the auto-dominated six-lane one-way 500 and 600 South streets, severely limit the area’s walkability and safety.

Editor’s note: This post was updated to add information and a graphic.