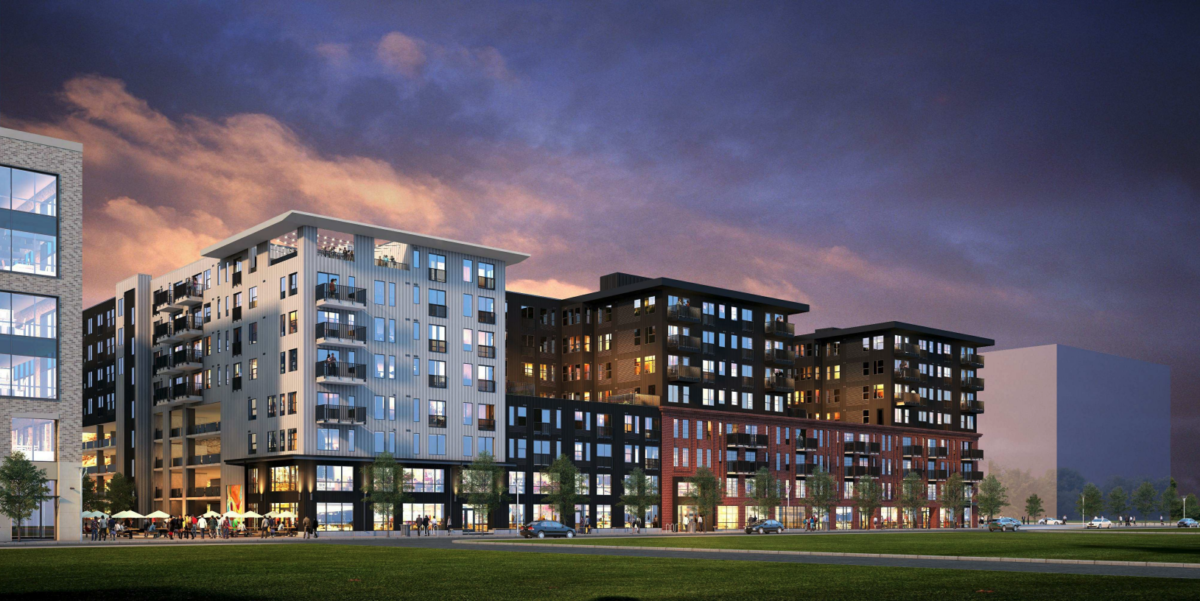 South Salt Lake is seeing the creation of three significant housing projects near the center of the area it calls downtown.

While the town south of Salt Lake City has paved the way for car-centric businesses to populate what was supposed to become a thriving urban core, there have been relatively few housing projects in its new downtown until now.

Three mid-rise residential projects will bring life, energy and space for 603 new homes in the area.

The city so far had largely attracted businesses that are suburban in nature.

Just four businesses take up 11.3 acres of land near 2100 South State, most of it surface parking. The city also recently entered into an agreement to try and open a Porsche dealership on 5 more acres of land in the area immediately adjacent to a transit stop.

The S-Line section of Parleys Trail, an urban multi-use pathway for travel and recreation, abruptly disappears as it enters South Salt Lake’s downtown west of State Street. (It reappears a block later for one final block before vanishing again.) A string of new drive-thrus are on their way on the east side of State Street.

And while the S-Line quickly saw redevelopment and new housing built, the area west of State in the area it zoned for more urban uses largely failed to attract a rush of housing development like Salt Lake City.

Basically, a slate of policy decisions appears to have hampered South Salt Lake’s fresh start. So it’s refreshing when developers make it across the approval finish line and start construction.

The building, named Utopia for its primary street at 123 W. Utopia, has received conditional approval from South Salt Lake and is being prepared for construction today.

The building will include podium parking with 190 parking stalls. Parking will be accessed off West Temple and Utopia.

Nothing says Utah quite like an apartment building named “The Billboard.”

The state is home to laws that are favorable to the billboard industry, with the visual pollution, lost tax revenue and space wasted on outdoor advertising benefiting a small handful of companies.

In this case, developers have embraced an existing billboard that faces Interstate 80 by designing an apartment building around the billboard at 1 Burton Ave. (2360 S. Main).

This is just the latest example of a new residential building being designed around a building that will continue to loom over the structure indefinitely. The Post District is squeezing in between state surface highways and looming billboards closer to Downtown Salt Lake City.

In South Salt Lake, developers will build an 85-foot tall building with 180 new apartments on nine lots that are consolidated into one, 1.69-acre parcel (73,616 square feet).

An electronic billboard owned by Yesco at 2396 S. Main will remain and was recently raised from 65 to 70 feet tall.

The building will include 207 parking stalls and 112 bike parking spaces. It will have frontage on Main, Burton and 2400 South.

Like the other buildings featured in this story, The Billboard will include 6,800 square feet of ground floor commercial.

Builders have been busy completing a third building at 55 W. Utopia that will bring another 236 units to the area.

It’s described as a parking and multi-family building. That’s a fitting description, as the building is includes four levels with hundreds of parking stalls below four levels of apartments. The building’s first levels on the Utopia Ave side are wrapped in apartments and “future retail.”

The building is a near-50-50 split between parking and housing.

Four levels of apartments — 236 units in all — will be stacked on top of four huge levels of parking. Units range from micro apartments to three-bedrooms.