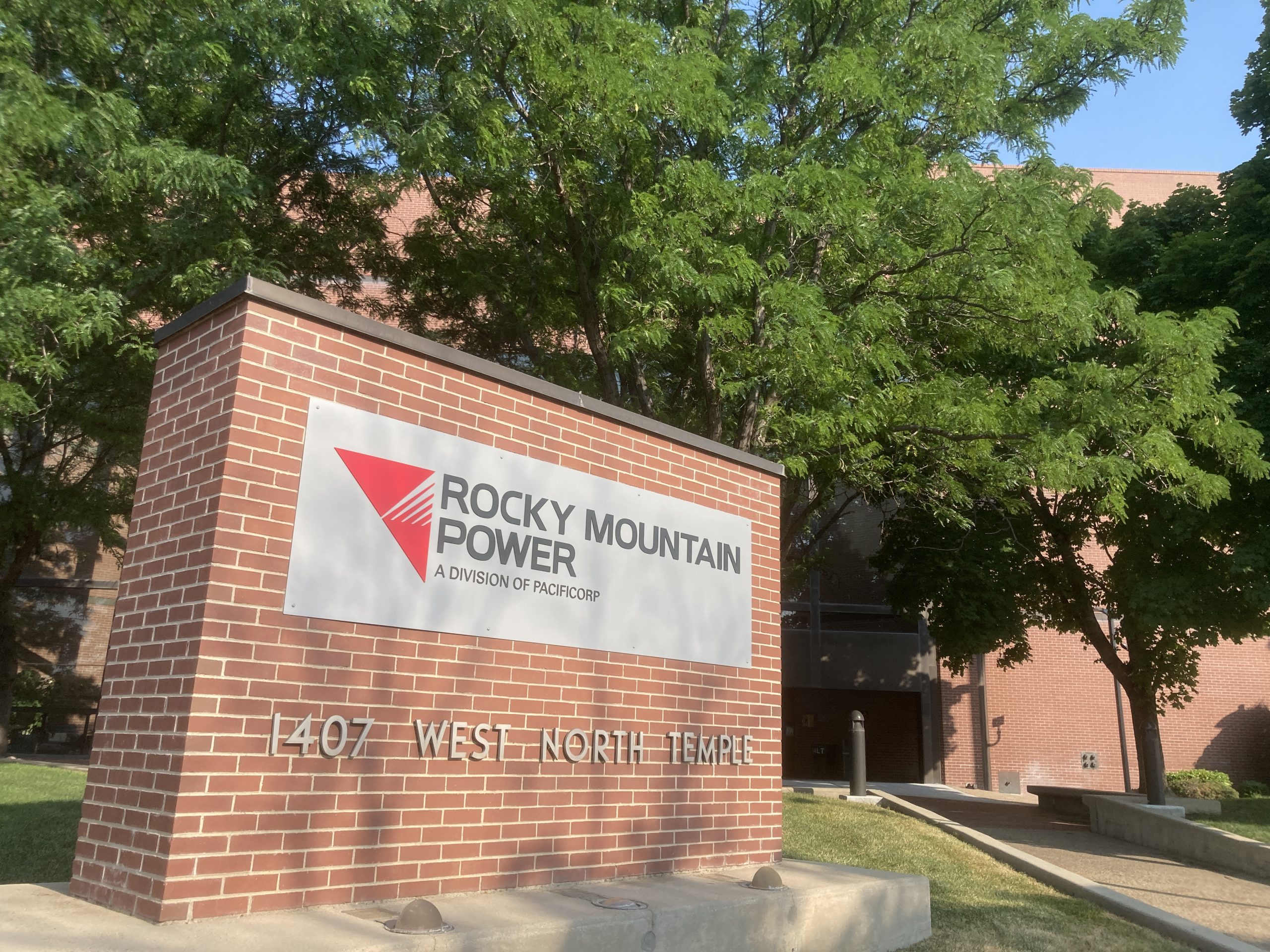 The utility company’s representatives submitted a rezoning petition last week that aims to turn an interior parcel, identified as 1223 W N Temple and adjacent to the Jordan River, from M-1 Manufacturing to one of the Transit Station Area zones, TSA-UC-C.

Its 100-acre property has enormous impact on the middle section of the N Temple transit corridor. It currently consumes 660 meters – over 2100 linear feet – of street frontage on the south side of the street between the Jordan River and Redwood Rd.

This is the first public move made at the city by Rocky Mountain Power (RMP) in its development journey on the property. Behind the scenes, the company spent much of 2020 and 2021 executing an RFP and RFQ process that derailed in Fall 2021, when the selected master developer and the company failed to come to contract terms.

We had a conversation with that developer, and the consultant who is guiding RMP through this process.

According to the application filed by Giv Communities, the new headquarters building will be “The inaugural development of RMP’s 100-acre redevelopment strategy, currently referred to as the Power District Campus. While this initial rezone is limited in scope, RMP intends for it to be the foundation of catalytic development for the site and subsequent quality infill development.”

While two new private office buildings may not attract the eye of development watchers, RMP’s treatment of the Jordan River corridor likely will. It has promised enhancements and increased access to the River on the west bank.

In addition, the rezone application hints at the company’s intentions for the rest of the “Power District Campus.”

The new HQ will be “sustainably designed” and “all-electric.” The application from Giv Communities further states that “The design and construction of the building will follow the key tenets of Rocky Mountain Power’s sustainability goals. These sustainability goals are intended to expand into future development of the site “

Tiffany Erikson, media relations with RMP, told us last month that “construction is scheduled to begin in 2023 with anticipated completion in 2024.”

Building Salt Lake has learned that FFKR Architects and Mortenson Construction are the new HQ’s chosen designers and builders.

Those two companies were also part of the team that won the competition, but not the contract, to master develop the entire 100-acre site.

The big RFP and RFQ: What happened?

RMP has been reluctant to reveal to us much information about their process or plans for their outsized site just a mile west of Downtown Salt Lake City.

We talked to the developers who won the competition to master plan the site but couldn’t come to contractual terms with RMP, Hamilton Partners.

The Chicago- and Salt Lake City-based developers talked with us about their experiences and understandings of their aborted partnership with RMP – which was “ended amicably by both sides,” according to Timothy Stephens, Partner and the project lead, and Bruce Bingham, a Founding Partner of Hamilton.

They seemed to bear no ill will toward RMP when we sat down at their offices at their SLC headquarters and crown jewel, the 222 S Main building.

“In our proposal we master planned this entire site with FFKR. And it was wonderful,” Bingham wistfully recalled with a smile.

Despite having “grand visions,” in the words of Stephens, RMP ran into a reality that was only gradually revealing itself to the company’s development team.

Why the change in direction?

From Hamilton Partners’ perspective, it seemed like uncertainty. Federal regulations on the activities of utilities are written in a different language, “quantitative,” as Stephens described it, whereas real estate development is “trying to achieve a series of qualitative goals.”

“Every meeting a new procurement person would come in and say we couldn’t do something or there was an A, B, and C of a process that had to be followed.”

“I think they were learning about the regulatory issues as they went through the process,” Stephens reflected. “It wasn’t like they built the process around the constraints. I think they had really great vision, and then that vision got constrained and reduced at every step.”

Ultimately, “for better or worse we couldn’t come to agreement on terms,” Stephens concluded.

We asked Hamilton how Rocky Mountain Power originally expressed their vision in the RFP and RFQ.

Stephens told us, “The RFP and RFQ was very much ‘we want this to be live, work, we want office buildings, multi-family’ but the specifics were very much developer-driven. They had urban planning principles that they wanted applied but weren’t pushing any particular mix of things.”

When asked whether they knew of Parker’s involvement, Stephens recalled that he “​​was on a couple of calls that we had, later in the process,” but didn’t know in what capacity Parker was employed.

Hamilton’s Bingham added, “He seemed to have a helpful voice for them, probably not as pro-development as we would have liked – but we weren’t his client, so that’s alright.”

“My role is a consultant, not a developer,” Giv’s Parker told us last month, which was confirmed by RMP’s Tiffany Erikson.

Complementing the density but noting that not much else is happening on the corridor, Parker hopes that the RMP campus can provide the amenities missing along the corridor’s segments that are already seeing development.

That would be the corridor’s east end, at the Jackson/Euclid station, and its west end, the Green Line’s last stop before the Airport, 1850 West. Residential density: check.

The city’s role in creating amenities

Parker’s critique has relevance for the city’s zoning code, which bears significant responsibility for the development along the corridor. The city’s master plan calls for place-making around Trax stations, hoping to shape N Temple into a new Main Street for adjacent neighborhoods.

Yet there’s no indication that the public sector is taking action to create public space along the transit corridor. The Planning Division’s Nick Norris was less than rapid in response when asked whether the city would be active in acquiring property for public space on N Temple.

“Some of that’s likely going to have to come from developers incorporating it into private space,” he said, before pivoting to the Folsom corridor.

The city’s Redevelopment Agency, similarly, is focused on the Folsom corridor, which runs along Union Pacific railroad tracks, east-west between S Temple and 100 S. The city has paved a trail from 500 W to 1000 W, and the RDA has long targeted the area with incentives.

RDA staff briefed the City Council earlier this month that it is planning to place $4 million in its North Temple Strategic Intervention Fund to offer commercial loans and adaptive reuse incentives to property owners, as well as help purchase property along the corridor for the Agency.

Giv Communities’ Parker was reluctant to give us many details about the urban design vision for the rest of the property. But he hinted that it will require a new zone to be created in city code.

Whether the site will be master-developed or not is unknown, perhaps still by RMP itself.

It would be ironic if, in an era of climate emergency, a utility company weren’t seeking a sustainable development pattern for its 100 acres. Giv’s reputation for all-electric and energy-efficient buildings is likely a reason for Parker’s involvement in the project thus far. RMP seems enamored also of his urban design principles.

What is apparent is a trend in the Salt Lake Valley toward walkable town centers and re-imagining master development away from auto-centricity. The 600-acre The Point development on the old state prison site in Draper is portraying itself that way.

When asked if the RMP acreage can provide amenities, including public space, that other sections of North Temple aren’t seeing yet, Planning’s Norris indicated that it may rely on Parker’s vision to provide. “If the city can create a great partnership with RMP, we can likely address some of these [placemaking] needs in the area and implement our plan for that area and the River.”