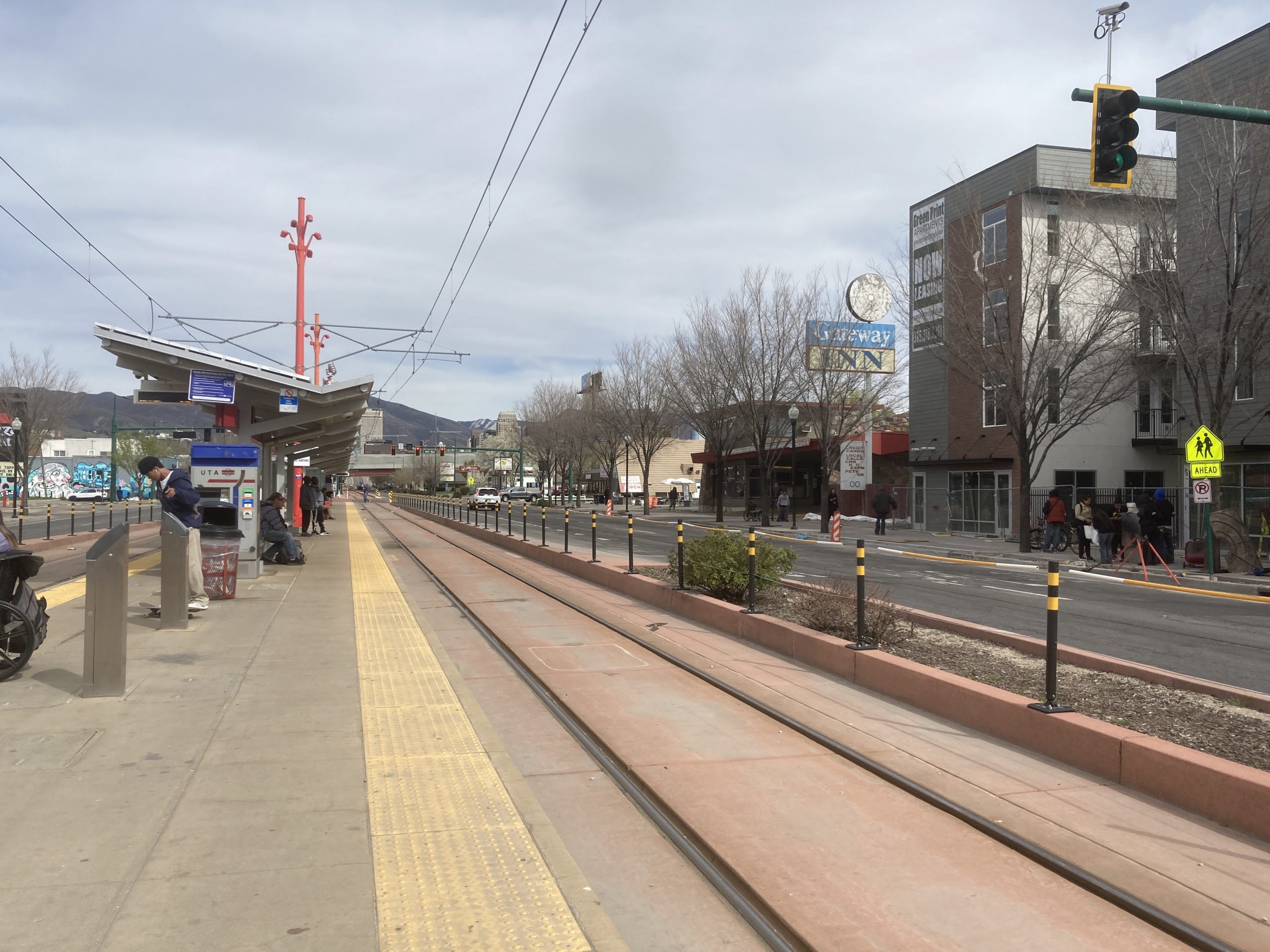 So close to Downtown, yet hemmed in by freight rail, Interstate highways and massive utility company compounds, the near west side of Salt Lake City near the North Temple corridor poses unique challenges for urban, walkable, transit-oriented development.

Along the North Temple’s corridor’s new public open space – the incomplete Folsom Trail – adjacent development interest is asking questions in the Euclid neighborhood near I-15, part of Poplar Grove.

One of those proposals, an upzone in TSA Transit Station Area zoning from UN-T Transition to UN-C Core, at 16 S 800 W, is being considered by the Planning Commission this week.

Our question for this North Temple series: Are city regulations helping to manifest a “new main street” for adjacent communities along the corridor?

Is it becoming, as in the aspirations of the master plan, “a place where people want to be” with “active and interesting community gathering spaces”?

The applicant’s property is unique – it fronts the public right-of-way on 800 W and the Folsom Trail, as well as the Union Pacific tracks on the north.

The proposal received a negative recommendation from Planning Staff.

The Planning Commission will have to answer the question of what level of development is appropriate at the site, just a block from the Jackson/Euclid Green Line TRAX station and currently residing in a “Transition” zone. The Commission will send its recommendation to the City Council, which is the final vote on all master plan and zoning code changes.

In lieu of parks and plazas – The Folsom Trail?

In a phone interview last week, the city’s Planning Director Nick Norris told Building Salt Lake that he did not see the city creating new public space on the North Temple Corridor.

We will save most of that interview’s content for a future installment. Could Norris imagine the city purchasing property around TRAX stations for public space, in tune with the placemaking intentions of the master plan and the station-centered TSA zoning?

“I don’t know I can.” Not really a surprise, given that the city’s Redevelopment Agency has all but given up using public dollars to purchase property in the pricey corridor.

Instead, Norris called the Folsom corridor “key” to future public space strategies for the city in the area.

The site of the requested rezone at 16 S 800 W. Looking north from the Folsom Trail, foreground. Photos by Luke Garrott.

“The city has the potential to partner with Rocky Mountain Power for some of this. If the city can create a great partnership with RMP we can address some of these needs in the area and implement our plan for the area and the Jordan River.”

Building Salt Lake is following the Rocky Mountain Power development, an update which will come as part of this series on North Temple.

The city’s emphasis on the need for the Folsom Trail to supply public park, plaza, and open space needs for the east end of the North Temple corridor makes a proposal going in front of the Planning Commission on Wednesday that much more interesting and important.

TAG SLC wants to build a 186-unit seven-story podium-plus-five that would need the 75 ft allowed by TSA-UN-C – the second-most-intense of the city’s transit zoning categories.

Planning Staff reports that the “applicant has stated that the development would need that level of density to support the ground level retail.”

Pedestrians, frequent trains and police on and around the Folsom Trail, just west of I-15 along the North Temple corridor. Photos by Luke Garrott.

The developer also needs a master plan change, the same switch from Transition to Core that the zoning amendment requests.

The city’s report adds, “according to the applicant, the purpose of this request is to provide a project with more density suitable for families, more parking and more eyes on the Folsom Trail.”

In an interview with Building Salt Lake, TAG SLC’s president Jordan Atkin emphasized the difficulty of designing a building just feet from speeding freight trains. He feels a two-story podium is necessary in order to locate living spaces on the north side of his project above the industrial-scaled train cars.

Atkin has built many projects in the city without concrete podiums, including in the Central 9th neighborhood, where the formed-based FB-UN zoning doesn’t require builders to provide off-street parking.

He told us this project would aim at providing a significant amount of ground-floor retail as well as 2-bdrm units, aiming to reach a .7 : 1 parking ratio. A major concern Atkin said he heard from both Poplar Grove and Fairpark community councils was to provide more off-street parking.