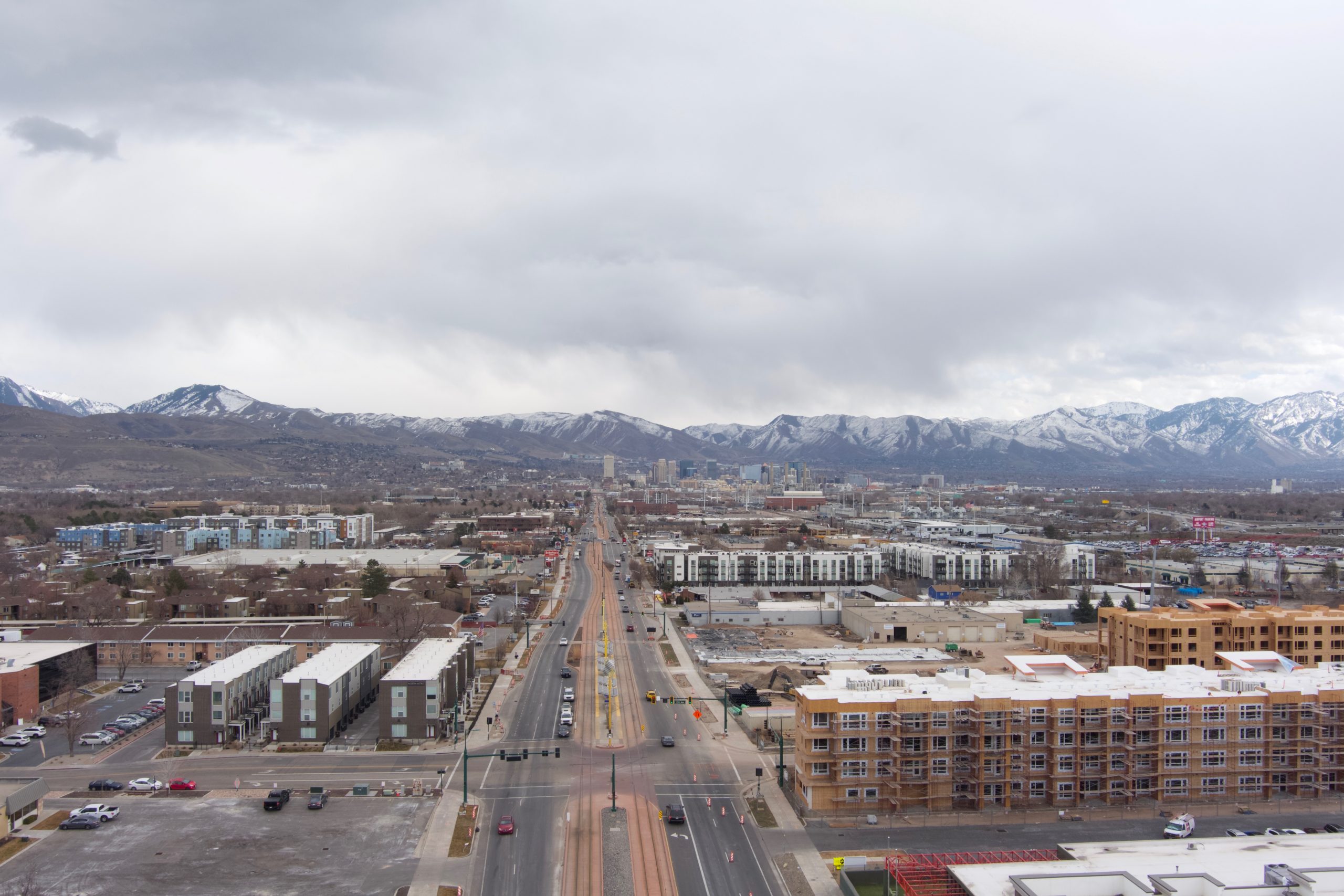 Rarely does a city have the opportunity to transform hundreds of acres just minutes from its downtown and airport. Especially along an existing light-rail line.

Wide 10 ft sidewalks with multiple accessibility features, as well as other pedestrian-friendly additions like new trees and irrigated plantings were added.

At the same time, new higher-density transit zoning was introduced, which followed the 2010 master plan.

The plan has high aspirations for the transformation of the 2.5-mile corridor that runs from 600 W to 2200 W. It foresees transit-oriented development concentrating around TRAX light-rail stations, where a mix of businesses and building types, as well as public gathering spaces, were to be found.

In the next several installments of our North Temple series, we’ll be asking how well the TSA Transit Area Zoning is implementing the urban design goals of the plan.

After only a decade of the zoning in place, the corridor’s rapid development is establishing early patterns of its new urban form.

In this article we’ll introduce the plan and the zoning + design standards that issued from it while sharing some photos. The second part of this story will engage experts and participants on the issues.

Disclosure: the author was on the city council and participated in discussions and decision making at the time of the TRAX construction, master planning, and rezoning of the area.

The plan is ambitious, trying to contribute to solving many of the area’s problems as diagnosed by planners, city officials, and residents that participated in the city’s community forums and workshops.

The “purpose” of the North Temple Boulevard Plan is to:

•Improve the overall safety of the community

We’re not out to examine how well the area is shaping up along all these lines – just the ones which aim at creating the walkable, mixed-use, connected neighborhoods that are major goals of the plan and the TSA zoning.

Our question: Are city regulations on the way to manifesting a new main street for adjacent communities, “a place where people want to be” with “active and interesting community gathering spaces”?

As part of its introduction, the plan’s authors highlight six principles that should guide development around the five stations along the “Boulevard.”

•Placemaking: “With the right mixture of uses, infrastructure, and amenities, desirable, attractive places are formed…incorporating key design guidelines in every project is a major component of creating a special place.”

•Diverse mix of uses: aiming toward “a diverse mix of uses, building types, connections, and transportation options…[as] different housing sizes and types provide people options on where and how they live depending on their age, income, lifestyle, etc.”

•Connectivity and circulation: “Transit-oriented development must be well connected to adjacent neighborhoods and destinations.”

•Compatibility: “Older, well-established neighborhoods are a community asset to which new development should relate and reflect the existing scale and character.”

•Value capture: “Transit-oriented development can increase the number of residential units in an area which may create more viable businesses. This builds communities, property values, increases the sales tax dollars for the community, and can help a community be more economically stable.”

•Parking: “Due to the increased transportation options and improved connectivity, people have the choice to own a private vehicle or not. This reduces the demand for parking…[reducing] development costs and local congestion.”

The master plan instructs “future zoning regulations” to “incorporate the main design elements that are necessary to implement the vision for each station area as standards and then create a system for ensuring a desired level of design is incorporated into all new projects through the adoption of a set of design guidelines.”

TSA code and guidelines – “ensuring a desired level of design”?

TSA zoning was developed to answer that call.

In it, the city regulates the design of buildings in two ways. Its design standards in land-use code dictate specific requirements like building placement up to the street, façade length, height, percentage of street frontage that must contain active uses, and distance between entrances.

Many exceptions are allowed, however, with design review, which includes a visit to the Planning Commission. Common requests include increases in height and façade length.

A second level of design principles – named “guidelines” – are expressed through a menu and points system, sometimes called “performance zoning.”

Developers are encouraged to assemble a score of at least 125 points, thus saving time by not having to undergo design review.

They choose from a menu of design elements to incorporate into their project. Some elements are weighted more highly, like top-notch environmental design, 33% affordable units, community-service inclusion, mid-block walkway construction, and incorporation of Historic Landmark sites.

The big point-getters are rarely chosen by builders. The city admits those are “bold steps,” as they’re called in the Transit Station Area Development Guidelines.

Instead, developers are usually able to avoid the extra scrutiny of design review by assembling 125 points by choosing from over 30 other options on the menu.

Has this system served the goals of the area’s master plan and zoning? One source close to the action told us that “North Temple is a tragedy happening in real time right now.”

The city’s current regulations have created a “mind-numbing regularity” of “five-to-seven story apartment buildings,” according to the source.

“The density is great,” he told us, but “replication of that en masse doesn’t feel good. It doesn’t give room for pocket parks or plazas. No one is building neighborhood amenities. You’re making everyone a C+.”

In our follow-up story, we’ll ask urban designers, city officials, and others what they think.

Does the city have the right requirements and guidelines? Is the 125-point threshold system too lenient? Is there even enough design expertise among city regulators to apply the existing standards?