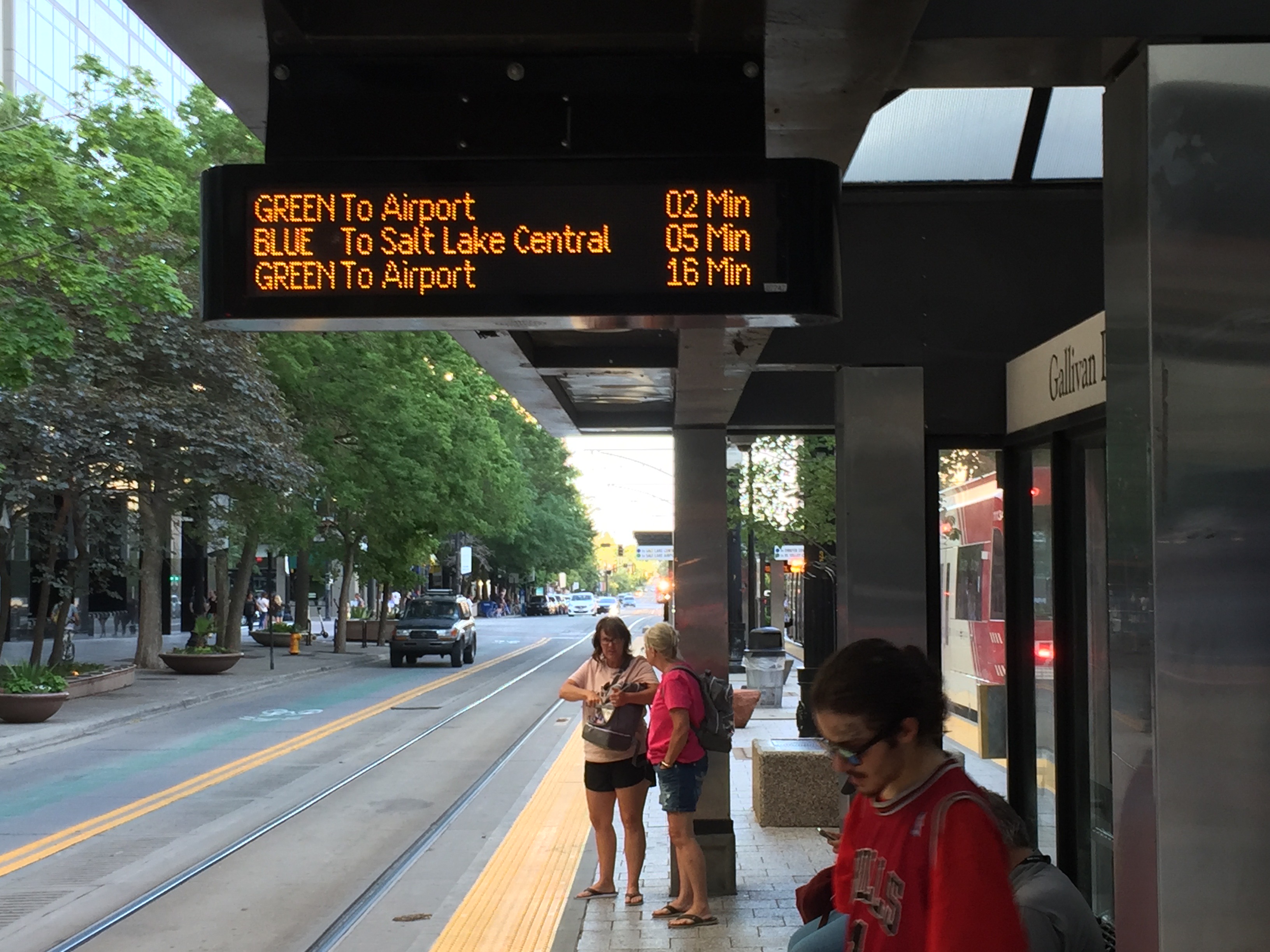 On the west side of Downtown Salt Lake City, 400 West seems like the perfect stretch of street for a light rail extension.

Lots of new high-density housing is being built nearby in the Depot and Granary districts of the city, and residents of those units would benefit from another public transit option. Beloved local businesses located on the road, like The Rose Establishment and Bewilder Brewing, would likely welcome a new way to get customers to their doors.

And a new TRAX line could go right past Pioneer Park — home to one of Salt Lake’s most popular summer events in the Downtown Farmer’s Market but currently bound on three sides by  non-pedestrian-friendly roads.

Furthermore, remnants of an old rail line still exist in 400 West’s median for a few blocks, practically begging to be rehabilitated into new passenger rail.

An abandoned railroad right-of-way on 400 West in Salt Lake City has potential to bring a light rail extension to the rapidly developing Depot and Granary districts of Downtown. Photos by Jacob Klopfenstein

So what would it take to see Salt Lake’s first new TRAX line in over a decade? Lots of time. In a best-case scenario, one transportation official estimated it would be at least six years before SLC residents could see a new light rail line on 400 West.

But momentum is there, and stakeholders say TRAX on 400 West could be part of a transit network that would connect crucial parts of the city and provide necessary services to up-and-coming areas of west Downtown. But years of studies and other bureaucratic hurdles stand in the way of that becoming a reality as multiple government agencies have something at stake.

The Utah Transit Authority, along with Salt Lake City’s Redevelopment Agency and the University of Utah, is currently studying what is known as the TechLink corridor.

The goals of the study are to explore possible connections between the University of Utah’s Research Park and Downtown Salt Lake City, specifically the industry-heavy western portion of Downtown.

Rail travel between the Salt Lake City International Airport and the U. is only possible with transfers, and public transit options up to Research Park are very limited.

The agency received a grant from the Federal Transportation Administration to study those connections and explore alternatives through the 18-month TechLink study, according to Patti Garver, UTA’s Manager of Environmental and Grant Services. Once that study is done and alternatives are identified, the agency will have to go through another round of federal approvals to make sure none of the alternatives would negatively impact the environment, which could take another year, Garver said.

If UTA gets those approvals through the National Environmental Policy Act (NEPA) process, it could then apply for additional funding through the FTA for the capital project to extend TRAX. Then, if that funding gets approved, it would take a few more years to design and construct the project. All that adds up to a rough estimate of around six years before transit riders could gaze upon 400 West from the window of a train car.

At the same time, Salt Lake City has completed its Ballpark Station Area Plan, and it’s working on a similar plan for the Granary District. Both will drastically change the look of their respective neighborhoods, adding more housing and more transit-oriented land uses. Both plans also would likely be integrated with a 400 West TRAX line, according to Garver.

“It’s kind of a combination of three different projects, so they’re all connected,” she said.

In April 2021, UTA completed a Downtown Salt Lake City Rail Extensions and Feasibility Study that identified three potential options for TRAX extensions into Downtown’s west side. All three utilize 400 West, and introduce a new Orange TRAX line, which would travel directly between the airport and the university.

All three scenarios also utilize an abandoned railroad right-of-way that starts near 400 W. 900 South and travels southeast before rejoining the existing TRAX lines near 200 W. Paxton Avenue. Garver calls this the “Ballpark Spur.”

In the first option of UTA’s study, the TRAX Red Line would be extended west along 400 South over to Pioneer Park. The Red Line would then travel south along 400 West and the Ballpark Spur, joining back up with the Green and Blue TRAX lines at Paxton Avenue.

In the second scenario, the Red Line is extended as it is in the first scenario. The Orange Line, however, would follow North Temple from the airport, turning south at 400 West, then turn east at 400 South to go up to the U. This includes fewer right-angle turns – which slow down trains, cause more wear and tear on tracks and create noise – on the Orange Line than in the first scenario. However, people transferring between the Orange Line and FrontRunner would have to walk two blocks between the two lines to transfer.

The third scenario sees the Red Line remain on its current alignment. Instead, the Green Line is extended south to Salt Lake Central, following the Blue Line alignment on 400 West instead of turning east to head through Downtown via South Temple. South of Salt Lake Central, the Green Line would follow 400 South and turn south on 400 West, following the Ballpark Spur to link back up with the Red and Blue lines at Paxton.

In the third scenario, the Orange Line would follow North Temple from the airport, cut south to South Temple via 400 West, turn south on Main Street, then turn east on 400 South to head to the airport.

In this scenario, the Orange Line would stick to existing Green, Blue and Red line alignments to bypass the west side of Downtown.

The first two scenarios are estimated to cost around $260 million to implement, while the third scenario would cost around $205 million, according to UTA’s feasibility study.

What about the Rio Grande Plan?

If these scenarios sound like the Rio Grande Plan to you, you’re not wrong — they’re similar to the citizen-created proposal.

Rio Grande Plan’s creators say their vision for rail in that area of town is more comprehensive.

“Our vision would be to have (the 400 West line) more fully integrated as part of TRAX to create a more complete network,” Cameron Blakely, an urban designer and co-author of the Rio Grande Plan, said in an email. “I think the 4th West piece is critical for opening up access to the blossoming Granary district. There needs to be more transit solutions there to complement the fast development that is occurring.”

As the west side of Downtown continues being developed and slowly starts realizing its potential as a vibrant cultural area of the city, one developer agreed that more transit is crucial for the future of the area.

“Fixed transit rail guides redevelopment,” said Warren Lloyd, whose architecture firm was involved in the Evo Salt Lake campus in the Granary District at 400 W. 700 South. “Providing transit options to the west side… Those are the types of things that really talk to the question of equity for all citizens. That’s been really heartening to be involved with — thinking about a broader community, not just commuters to the U., not just Downtown business traffic. It really connects our community in a vibrant way.”