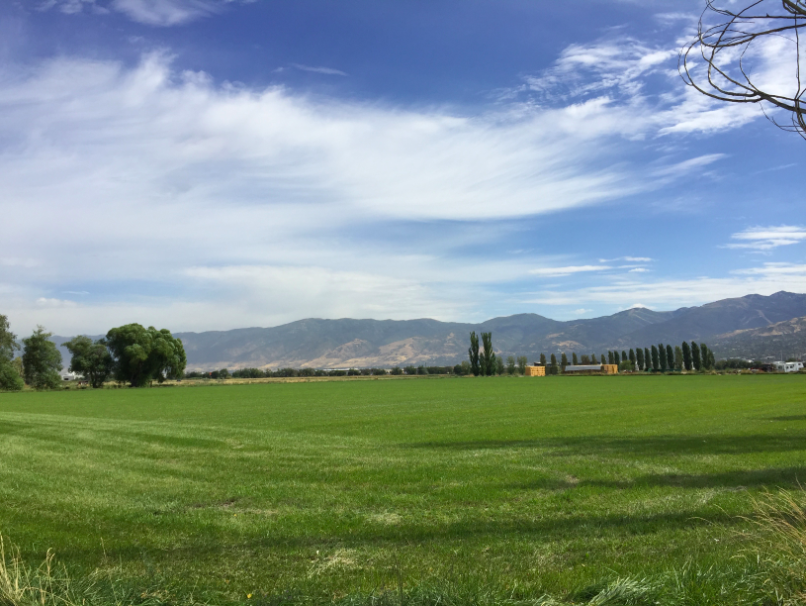 Pro-development changes in the draft master plan for the Northpoint area, containing large segments of Salt Lake City’s last agricultural land, have riled elements of the public and caused the city’s planning commissioners to hit pause.

Staff from the city’s Planning Division presented its latest draft of the Northpoint Small Area Plan to the SLC Planning Commission during its last meeting in October.

The plan, set up for a vote at the October 26 meeting, was uncharacteristically tabled after Planning Commissioners balked at giving up on a vision of open space for the former Misty River residential development on 160 acres of farmland adjacent to the Jordan River and I-215.

The meeting exposed a gap between visions for the area – one driven by market demand for warehouse square footage and another by preserving open agricultural space adjacent to a densifying city. Complicating matters are the airport’s eventual plans to expand its easternmost runway and the city’s ban on residential development near that flight path.

As community members, organizations, and commissioners push back, city planners are finding themselves increasingly squeezed. Ironically, the Northpoint plan is heavy on environmentally responsible design proposals for an area that is trending toward an inherently unsustainable and unwalkable land use – a warehouse and trucking ghetto.

While the plan discusses open space conservation strategies on one hand, planners are insisting that marking private property as open space in the plan’s future land use map will result in lawsuits claiming regulatory takings.

Members of the Planning Commission contested that notion, and voted 8-0 to table the plan until community and stakeholder concerns were addressed by planners.

The Northpoint Small Area plan was put together by Logan Simpson, a local landscape architect and environmental planning firm.

Its first goal is to “identify appropriate future land use and development characteristics for the area that can coexist with the wildlife habitat and natural environment of the Great Salt Lake, and the operations of the Salt Lake City International Airport.”

Noteworthy recommendations are phasing out BP Business Park zoning and transitioning AG-2 and AG-5 agricultural zones to M-1 light manufacturing instead. Senior planner Krissy Gilmore’s staff report states, “M-1 would support a better mix of land uses (such as the BP zone only allows retail/commercial if associated with a business park), a development pattern that allows for clustering (smaller minimum lot size and width requirement), and preferred landscaping requirements. The M-1 zone is also subject to the water limit of no more than 200,000 gallons of potable water per day. This water limit does not apply to institutional, residential, or agricultural uses.”

The building of two new arterial roadways – the city’s widest type of street – is also in the plan. The city is preparing to amend its Major Streets Plan to include a new diagonal road originating from 2100 North that will access the airport, as well as a new north-south road at 2900 West.

Planning’s staff report strangely mentions an intention to “support a multi-modal system” – which from the arterials recommended in the plan seems a far step from reality.

Part of the attempt to limit impacts on the Great Salt Lake is to contain the footprint of future industrial developments through incentivized, not mandated, clustering of buildings. The plan also proposes limiting the length of those buildings to 400 feet along 2200 West in M-1 and 250 feet in areas marked for transition from agricultural or open space to M-1.

In the plan’s latest revision, that transition area is mapped onto the 160 controlled by Dave Tolman (XCEL properties), who is petitioning the city along with other property owners for annexation from Salt Lake County to Salt Lake City. Denied by Salt Lake City’s prohibition against housing so close to the airport, Tolman previously tried to annex his property into North Salt Lake municipality in order to build his Misty River residential development.

Now pursuing warehouse development on the property, Tolman has flipped back to Salt Lake City. His representative Jason Head told the commission “If the city’s intent is indeed to see industrial development in this area, 250 feet and 400 feet simply do not work for modern industrial buildings.” Head cited the already-permitted logistics campus by Scannell on the west side of 2200 West “that will have in its first phase a building that is 2000 feet long. We’re already in the deep end, and the proposed scale just doesn’t work.”

Another imperious interest has been the SLC Airport, which Planning puts at the head of every priority list concerning Northpoint. Whether it’s in the public’s interest to expand the airport’s runway capacity is a question apparently off the table.

Even if the Airport does expand as planned, it’s not altogether clear that federal guidelines would prevent housing being built in Northpoint. Previous statements made by Airport officials to the Salt Lake County Council opposing Tolman’s first annexation attempt indicate that what they’re most worried about is not public health, but public complaints. Even if people are willing to live close to a runway, officials say they don’t want the waves of public complaints that are generated at the country’s more urbanized airports.

That ban has shaped Northpoint’s present and future as much as the development rights on real property.

Yet in the current housing crisis, the city is allowing some housing to be sited in Airport Flight Path Protection Zone B, the same zone that covers much of Northpoint. This has been reflected in city approval of the transition of motels near the airport into shared-housing apartments for people transitioning out of homelessness.

Other conflicts and contradictions

Conflicting interests have arisen in the city’s public engagement process as well.

Many farmers are eager to sell out and move on, yet some are digging in. Westpointe Community Council, which had pressed to preserve open space among other goals, discovered that a significant change was made to the plan since the consultant’s last large public meeting in September. Tolman’s property, previously visioned as open space, is now marked for transition to M-1.

The interests that intervened in the interim – and perhaps raised threats of takings lawsuits – seem to be driving outcomes, with the proposed plan paving the way. Is the area destined to become a mega-warehouse trucking ghetto as current development trends indicate?

Nick Norris noted in an email to Building Salt Lake that the plan calls for a new Northpoint zoning category that would encourage “more manufacturing centric jobs in the area as it transitions while also concentrating development away from waterways, wetlands, and wildlife habitat.

“As far as the Northpoint area being primarily a logistics center, the recommendations for future zoning regulations for the area are being updated to limit that type of use outside of already entitled projects,” Norris wrote.

So it’s down to a race of the clock. Given the friction at the Planning Commission, and the city’s usual land use change timelines, the likely winners will be market trends and development rights.