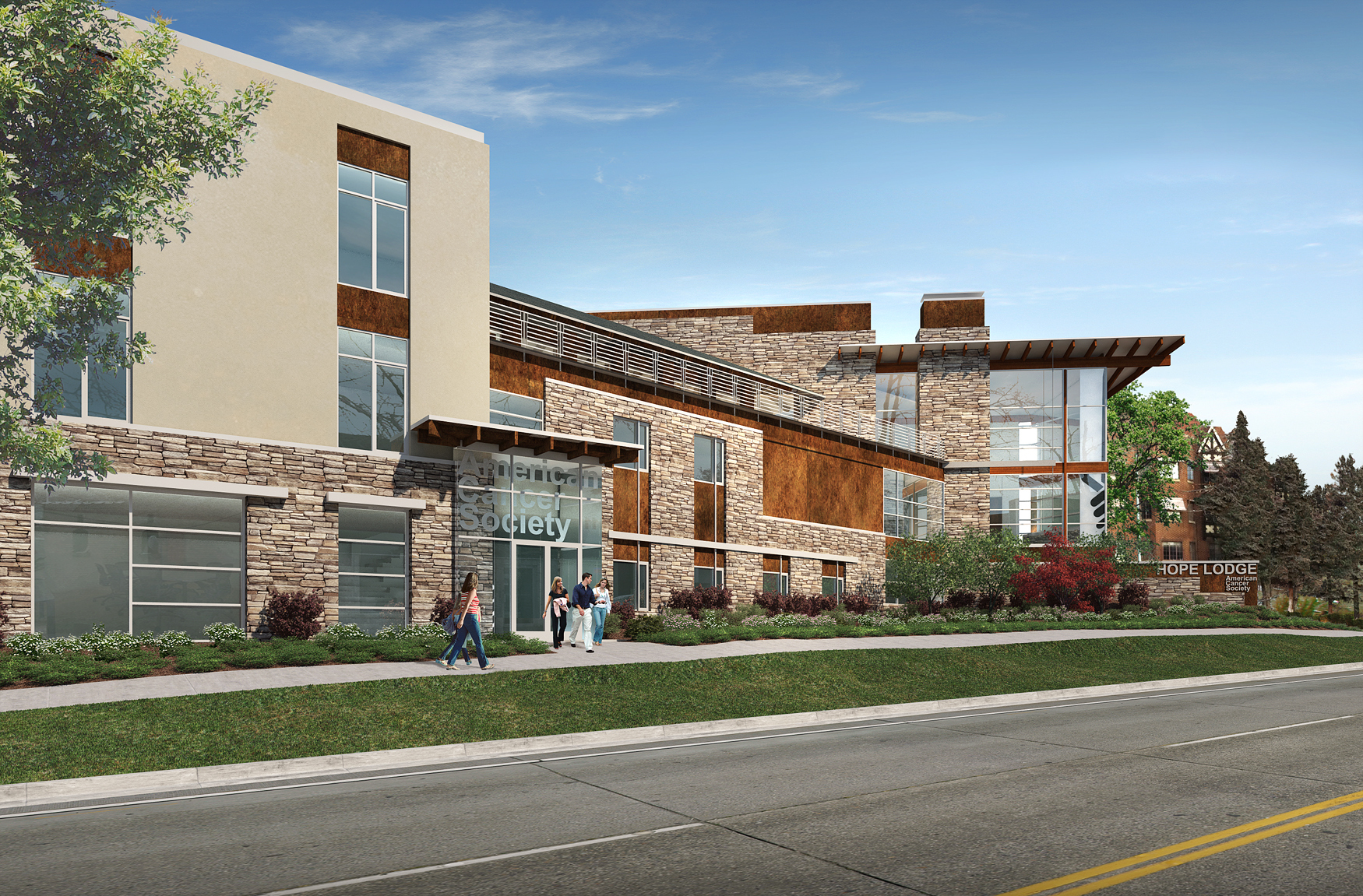 Construction is underway on the Hope Lodge,  a lodge for adult cancer patients run by the American Cancer Society.  When completed, the Utah Hope Lodge will be one of 31 lodges throughout the U.S. that provide temporary lodging for patients receiving cancer treatment.

The 63,000 square-foot lodge will include 41 private suites, common living and cooking/dining areas, a healing garden and a study. The top floor will have large floor to ceiling windows in the common areas that will provide views of the Salt Lake City and Mount Olympus as well as a balcony that will allow residents to gather outside.  Other common areas will include a movie room, library, game room and a multipurpose room.

The Hope Lodge is being built on what was previously a meetinghouse for The Church of Jesus Christ of Latter-day Saints on the northwest corner of 100 South and 400 East.  Demolition of the 63-year-old meetinghouse was finished this spring.  The LDS Church not only donated the site but also the meetinghouse itself.  Before demolition, volunteers carefully removed materials from the former meetinghouse that were then donated to Habitat for Humanity, an organization that provides housing for low-income residents.

The Salt Lake area hospitals, especially Primary Children’s and University of Utah hospital, serve cancer patients from across the Intermountain West.  The area has long lacked adequate lodging for the hundreds of patients and their families that receive treatment here annually.  Early this year an expansion of  Ronald McDonald House, at 935 East and South Temple, opened to the public.  The four-story, 40,000 expansion added 42 rooms, additional play areas, computer and movie rooms and a sanctuary space.   The Ronald McDonald House provides lodging for terminally ill children and their families.

According to the American Cancer Society, nearly 11,000 Utahns were diagnosed with cancer in 2013 and 4,500 cancer patients traveled to Salt Lake City for treatment.  The Hope Lodge plans to serve around 800 patients annually with an expected average stay of 21 days per patient.

The lodge will also house the local offices for the American Cancer Society.

Like the nearby expansion of the Ronald McDonald House, the design of the lodge fits in with the surrounding neighborhood.   Also like the McDonald house, the lodge will have little setback from the sidewalk helping to create more density and street engagement along 100 South.

Renderings of the Hope Lodge show a rustic typical lodge design but with modern elements, such as large windows and a nature-inspired design used to encourage healing.

With the offices and a clinic of the Odessy House of Utah just across the street, the stretch of 100 South between 300 and 400 East will become a place of healing for people surviving cancer or struggling with addiction.

Vacant lots in the area around the new lodge are finding new purposes.  The meetinghouse that was demolished to make way for the Hope Lodge had been vacant for a few years.  Less than a block away from the Hope Lodge, the former campus of LDS Business College, whose main building was a large mansion rich in history, was donated to the University of Utah who plans to restore the former mansion that will house the University’s new Utah Policy Institute.

Construction of the Hope Lodge is expected to be completed the summer of 2015.