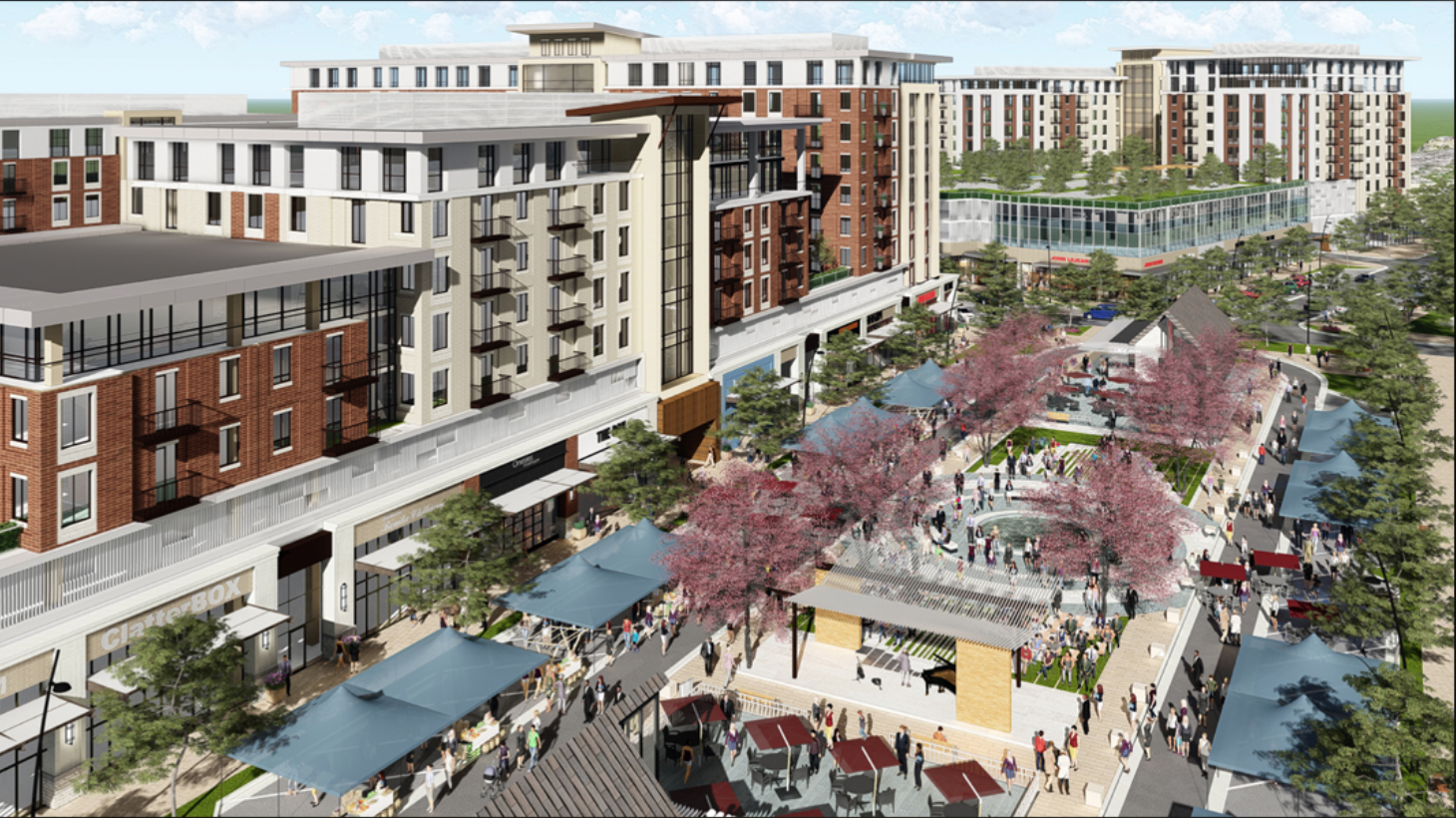 Several hundred Holladay residents flooded their city hall to voice their opposition to a proposed amendment to the Site Development Master Plan for the 57-acre site of the former Cottonwood Mall at the 4800 South block of Highland Drive.

On Tuesday, Holladay’s City Council Chambers and the overflow room were standing-room-only with residents sitting in the aisles and the hallway for the first of several public hearing on the proposed redevelopment of the Cottonwood Mall site by prolific local developers, Woodbury Corporation and Ivory Development.

“What we are trying to do is create walkable communities… sustainable communities where people live work and play,” said Chris Gamvroulas, president of Ivory Development.

The project would also include a large plaza for events and five-acres of open space with community trails along Big Cottonwood Creek.

Holladay’s City Council approved the current development plan in 2007 when the site’s owner, the Howard Hughes Corporation, sought to develop the vacant property into a mixed-use, European-style town center.   The Hughes Corp proposal would have included 600 residential units, 620,000 square feet dedicated to retail and entertainment and 260,000 square feet of commercial office space.

The Woodbury/Ivory proposal would have significantly less retail and nearly twice as many housing units, going from 600 units to between 1,035 to 1,255 units.  Building height would also increase in the designated mixed-use area under the new proposal.  Under the site’s current development plan, the developers can build up to the 90 feet, around eight-stories tall, along Highland Drive and Murray-Holladay Road.  The new development team is asking the city to allow heights up to 135 feet, around 12-stories.

“It has taken us ten years working with Howard Hughes Corp to finally come forward with a proposal,” said Jeffrey Woodbury, senior vice president for development and acquisitions at Woodbury.  “We are completely committed to this plan; we believe we can succeed, that the retail is the right size and that we have the right partner.”

Woodbury argued that his team sees the project as a walkable village and that a walkable community needs to have a live/work/play atmosphere.  Additionally, Woodbury told the commission that the retail landscape is changing and even with the reduced retail component more residential units are necessary to support any additional retail in the neighborhood.

During Tuesday’s public hearing, residents were very vocal in their disapproval of any commercial or residential development of the 57-acre property.

Residents applauded and cheered for every speaker that spoke against the project.  While some residents briefly heckled when a transportation engineer presented to the commission the results of a developer-funded traffic study.

In general, residents expressed concerns about the proposed height increase, arguing that it would block their views of the Wasatch Mountains.

“Holladay is a city of single-family homes and large trees,” said one resident. “Please save Holladay,” she pleaded.

Many residents called for more open space and parks instead of more development and criticized the project’s proposed density arguing it would negatively impact traffic, home values and neighborhood schools.

Several residents argued that the Cottonwood Mall site proposal goes against the family-focused nature of Holladay and that bringing new residents would hurt the city’s current residents.

“Holladay is not Daybreak,” said one resident.  “These buildings will literally and figuratively cast a shadow over Holladay,” said another.

Tuesday’s public hearing was one of nine public meetings the city has planned to explore the new development proposal.  Based on the city’s current schedule, the soonest the City Council would vote on the project would be in February 2018.  If the council approves the revised proposal, Woodbury and Ivory will purchase the property from the Howard Hughes Corporation.

“If the plan before you tonight is not approved, then I’m afraid the site will likely sit vacant for years to come,” warned Chris Curry, senior executive vice president of development at Howard Hughes Corp.

But for many residents that spoke on Tuesday, a vacant lot would be better than a large mixed-use development.

“If you leave it alone, it will probably clean up on its own,” argued a long-term Holladay resident speaking about the 57-acre vacant lot.