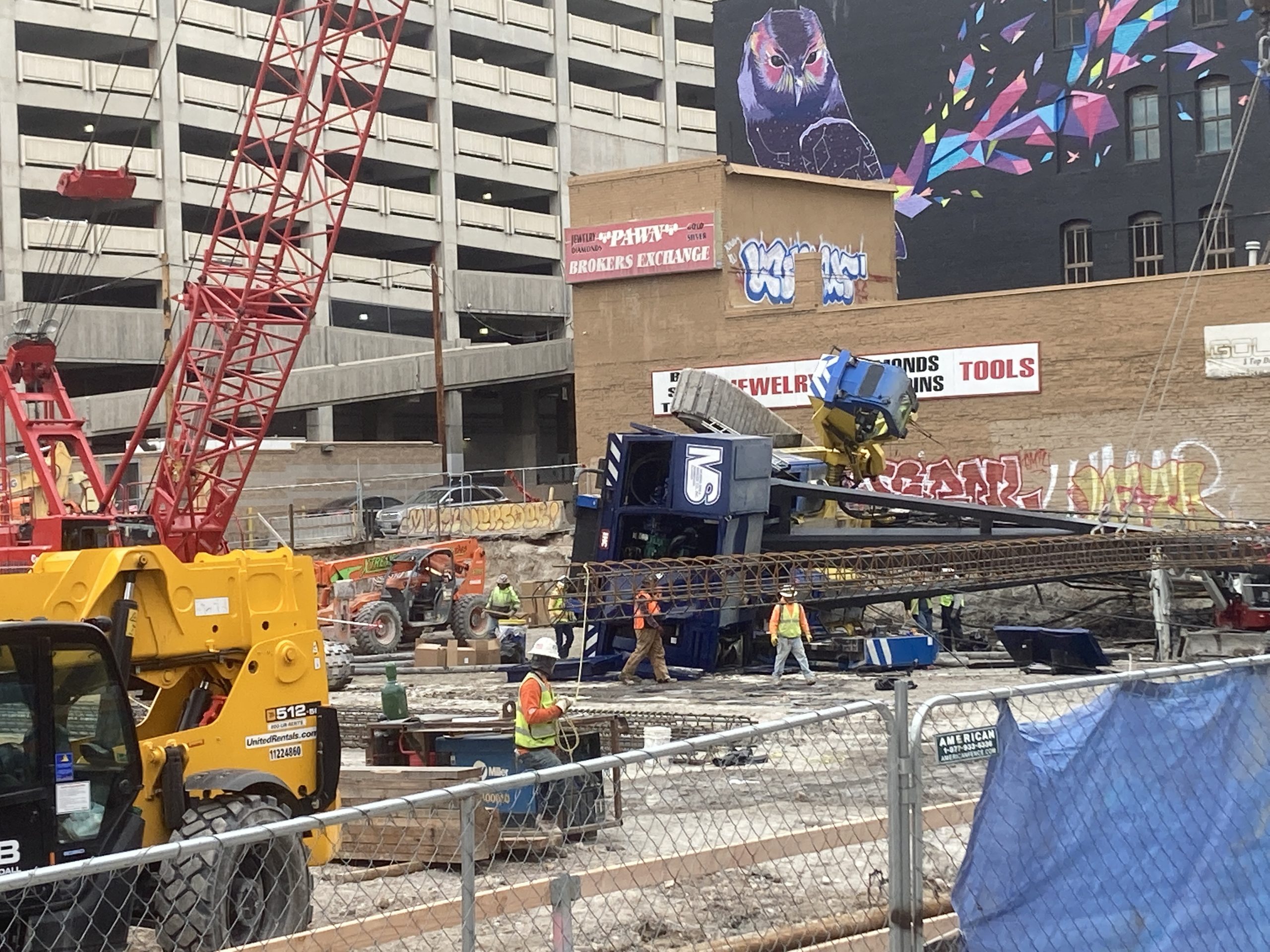 The operator of a massive drill rig that collapsed on the site of Utah’s future tallest skyscraper is recovering, and a team is investigating both the cause and the potential delay that Tuesday night’s accident will have on the construction of Astra Tower.

The rig toppled over Tuesday night onto one of the city’s busier areas. One person — the drill rig’s operator — was injured in the incident.

It’s too soon to say what kind of setback the incident will have on the project, which was already delayed during a boundary dispute with a neighboring business. But based on similar incidents in other states, it’s possible the incident causes yet another delay in construction past the time it will take to clean up the wreck.

“Any impacts to project schedule are currently unknown,” said Amy Christensen, a spokeswoman for Jacobsen Construction, which is overseeing work on Astra Tower.

The rig fell over Tuesday night as the subcontractor was preparing soil for work on the foundation of the 40-story tower at 200 S. State St. A rig extension smashed two unoccupied cars on State Street after falling.

The operator fractured his lower back but won’t require further treatment other than rest, and was expected to head home Wednesday night.

As for the impact on construction, it was too soon to say what impact the incident would have on Astra.

“Currently we are focused on reviewing the cause of the incident,” Christensen said, “but in the coming days we will take a more comprehensive look at potential impacts to task sequences and other scheduling considerations in need of adjustment.”

Fox13 News’ Nate Carlisle reported Wednesday that the state Utah Occupational Safety and Health would investigate the incident, as well.

A fatal crane crash in British Columbia led to a three-month delay before work continued on a high-rise in Kelowna.

Another fatal crash in New York City could have led to a three-month delay, but the city in that instance revoked the construction permit of the firm.

In Utah, it will take time to right the massive rig after investigating what went wrong on a breezy, late-winter night this week. The machine remained down on Wednesday afternoon as the public sought information into what caused such a big piece of machinery to fall across State Street in the center of Downtown Salt Lake City.

The rig’s owner, Morris-Shea, didn’t respond to multiple requests for comment about the incident.

Jacobsen paused all work while reviewing what happened.

Another, at 200 E. 300 S., was recently erected and is preparing to start work on what is being called Convexity Tower.

The city is undergoing a rapid transformation, from having a dearth of housing in the Downtown core to an area that will soon have multiple residential towers, if and when they’re completed.

The city’s Downtown area is set to become one of Salt Lake’s most populous neighborhoods in the coming five years.

Among the other projects undergoing work are Liberty Sky, which was one of the city’s first residential high-rises and is nearing completion. Down the street is 255 State, which is well underway after years of delay.

But Astra is to become the state’s impending high water mark. And after a lawsuit and now crash, things haven’t been off to a smooth start.