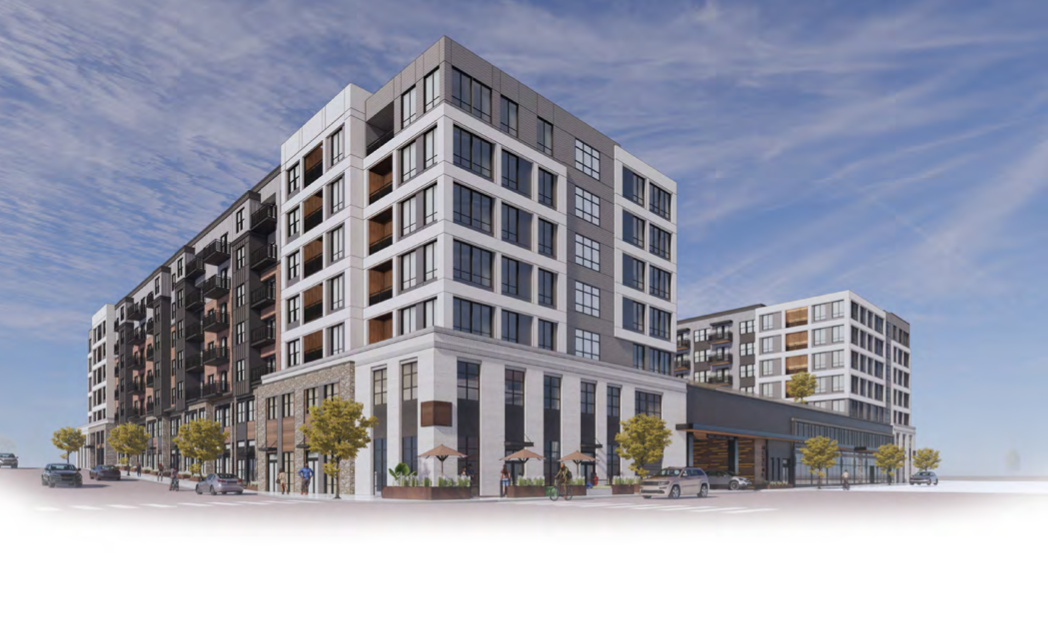 Their planned eight-story building, at 152 North 500 West, is immediately adjacent to the UTA Trax, bus and FrontRunner commuter rail station at the North Temple bridge. It will replace a surface parking lot immediately north of the viaduct that currently serves the 210,000 sf Hardware office building. The 384-stall surface lot is currently under-used, and appears to need less than half its current capacity (BSL counts).

The developer’s representative admitted to the commission that “the parking structure is twice the size needed in our current circumstances” and will cost $40 million. It is one level down and three above grade.

The Hardware II building will be the fifth of six “assets delivered” by KBS Development and Cherry Tree Capital in the Hardware District that has completely transformed the light-industrial area immediately northwest of Downtown.

While it shares frontages with West High School on the east, and the UTA multi-modal station on the west, the Hardware District is becoming known as a luxury enclave with few offerings for the public (Lee’s Market on its NE corner is a notable exception).

Some of the Planning Commission’s comments reflected those concerns, which included criticism of the length and quality of the project’s southern facade. The applicants will need to return to the commission for final design review approval.

The developer’s case and the commission’s response

Building Salt Lake originally covered the proposed development in June, when the developer submitted documents to the city. Six exceptions to zoning code are being requested. Two of them – ground floor use & visual interest and facade length drew the most attention from planning staff and the commission.

Yet two sides of the building – on the south and west – host distinct back-of house functions that did not impress commissioners.

490 West, increasingly seeing foot traffic from FrontRunner, bus transfers, GreenBike, and the Folsom trail, will see “our trash and dumpster enclosures, our loading and unloading, and our vehicular circulation for the cars,” Issac told the commission.

Renderings indicate 80% of the western facade will be devoid of street activation. The petitioners are asking to reduce the number of entrances along the 311 ft building from the required eight to four. TSA-UC-C Transit Station Area-Urban Center-Core zoning puts a limit of 200 ft on building facade length.

Yet the commissioners’ only comments on the western frontage were directed toward the placement of the single retail space in the development. Developers plan a coffee shop and bike shop at the northwest corner of the building in 990 sf of space.

Commissioners Mike Christensen, Jon Lee, and Amy Barry suggested moving the location of the retail from the northwest to the southwest corner, closer to the foot traffic generated by south end of the FrontRunner platform and the Folsom Trail.

“If you really want to serve passengers, that [retail] needs to be at the southwest corner,” Christensen noted.

Lee and Barry focused their attention on the south facade, which fronts a sidewalk running from 400 West along the north side of the North Temple viaduct.

The proposed southern frontage consists exclusively of the wall of the parking garage, with zero entrances planned. Architects have pushed the building back 16 ft from the property line in order to avoid an imposing canyon-like feel on the sidewalk, but offer little-to-no interest for the public realm.

That concern was expressed by planner LIz Hart in her staff report, determining the southern edge “does not meet the intent of the design standard.”

Commissioner Barry, as well, expressed her disappointment with the facade, which reaches 324 ft.

“The first time I saw a building that was over the 200 foot length that actually met the intent [of the ordinance] was one of your buildings,” she told the applicant. “For the first time I thought, ‘well, maybe it can be done’.” But this project rendering “feels massive, so I know you can do this better.”

Commissioner Lee emphasized the need for improvements and activation along the public sidewalk on the southern elevation. It is permanently shaded, a big plus in summer but much less so in winter. Lee suggested designers treat it like an alley with active uses, “using the viaduct as an asset,” and creating a plaza with seating at the southwest corner.

The hopes for creating a “place” at this intersection of travel modes will be further affected by the street connection of 490 W north and 500 W under the viaduct – a requirement by the city that the developers are funding.

The applicants appeared to be dutifully taking notes during the the commission’s comments, and will work with staff to refine their proposal for review and approval at a future commission meeting.