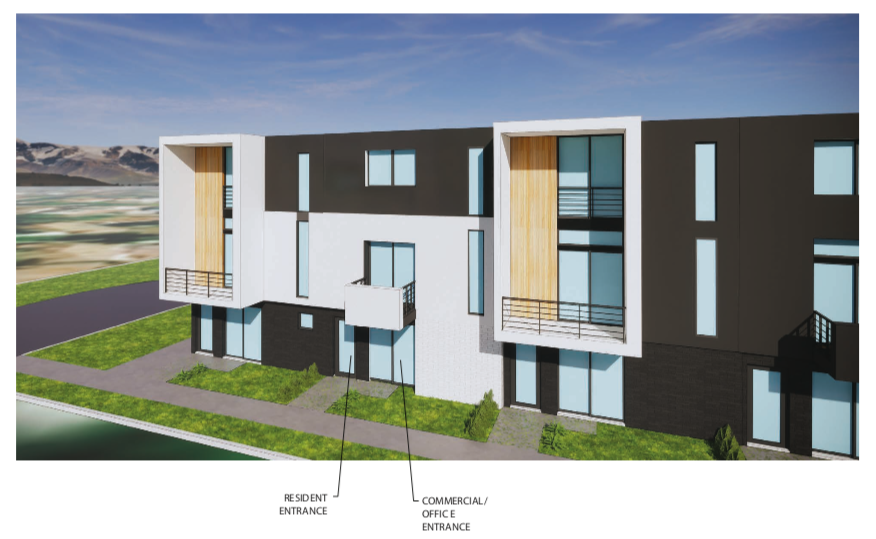 In one of the few commercial nodes in Glendale, a neighborhood identified as “food desert” by the city, a for-rent townhome project is looking for approval to replace a 1960s-era 20,000 sf locally-owned grocery store and its large surface parking lot at 1179 S Navajo St.

Axis Architects’ 57-unit, eight-building, all 2-bdrm project will bring some density in a sea of single-family zoning. That lack of density is likely the reason businesses in the former Glendale Plaza immediately to the north (also sitting on rare CB Community Business zoning) have failed to thrive. It’s now an institutional use, the Dual Immersion Academy, a public charter school.

The Salt Lake City Planning Commission will decide this week whether the developer’s commitment to make all 24 street-facing units into live-work spaces meets the city’s plans for the area. Planning staff has recommended approval.

From a development perspective, one must wonder whether the proposed density (24 units/acre) will provide enough rooftops to make future retail at this node viable. In the CB zone, the height of buildings are limited to 30 ft, with no possible increase with design review.

The connection between density and neighborhood retail

The design of the current retail properties is the opposite of walkable, with parking lots at the street front. With the Navajo Circle park just steps away, the seeds of a “place” are present. It’s just missing people outside of cars.

Pierre Langue from Axis told the Glendale Community Council in July that “right now, what is described in the master plan, is that the neighborhood doesn’t have enough density, so businesses open right now are likely to fail.”

Planners argue that “Although the development will result in the loss of a neighborhood grocery store, it does contribute to the viability of surrounding businesses [and] introduces new commercial opportunities.”​​

Overhead of the neighborhood context. The former Glendale Plaza, a suburban-style shopping center, now a school, looking south towards Tejeda’s market and the site of the Glendale Townhome project. Photos by Luke Garrott, overhead courtesy Google.

Those surrounding businesses are few – the closest is the Hook & Ladder restaurant and Firehouse Floral on 1300 S – and will be fewer with the demolition of Tejada’s market.

Or will there be a jump in local businesses?

Axis’ original plans did not include the 24 live-work spaces currently proposed. Will they provide low-cost entry to entrepreneurs in one of the city’s most affordable neighborhoods?

The developer thinks so. “The proposed development provides the setting along both Navajo and Glendale where local business may take root. Live-work spaces in each townhome on these streets are laid out to include small commercial studios, offices, light commercial shops, or other workspaces on the ground floor that may be accessed directly from the street without going through the residence.”

Presumably the fences will need to be removed to create access to the live-work units along Navajo and Glendale streets. Images courtesy Axis Architects.

While each unit is approximately 1600 sf, the square footage of the commercial space is unclear in the plans. They share the ground floor with a garage and a stairwell.

Whether designers will be changing the facade of the ground-floor frontage to better emphasize the potential businesses therein, is also not revealed in the latest renderings submitted to the city.