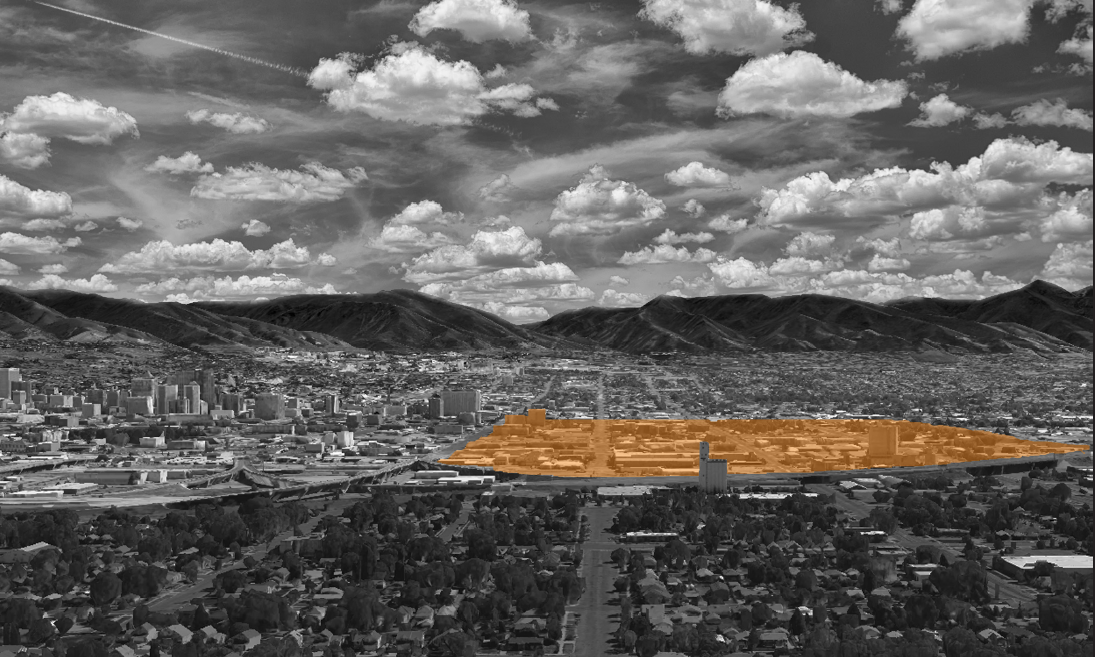 Utah’s emerging start-up culture is helping drive the state’s technology boom and is drawing national attention to the region.  Salt Lake leaders want to ensure that the capital city, as the state’s economic center, plays a greater role in this emerging economy and is looking to the Granary District as the place for local start-ups to flourish.

Under the Granary District Strategic Plan, the city hopes to transform the former industrial neighborhood into a mixed-use, vibrant, transit-oriented neighborhood.

“It is an enormous opportunity for Salt Lake to set ourselves apart and do something different,” said Council member Derek Kitchen.

At the center of the redevelopment plans for the Granary, the neighborhood bounded by 300 West to Interstate 15 and 600 South to the Interstate off ramp, is the city-owned Fleet Block on the 800 South block of 300 West.  The city plans to have the 10-acre block serve as the center of a proposed innovation district, a type of district that Bruce Katz and Julie Wagner of the Brookings Institute describe as “the ultimate mash up of entrepreneurs and educational institutions, start-ups and schools, mixed-use development and medical innovations.”

The idea behind Innovation Districts is that they bring together various people and institutions in a way that encourages collaboration and idea exchanges that lead to innovative ideas.

Just as a garden needs specific elements to yield produce, so do districts that encourage innovation. According to a 2014 report by the Brookings Institute, Innovation Districts require an ecosystem that balances economic, physical and networking assets.

While much of the economic and networking assets come from the private sector, the city has direct control over the physical assets: the buildings and infrastructure.

“How this space builds out will have a lot to do with who is attracted to it,” said Council member, Erin Mendenhall.

Though the Fleet Block is in a RDA project area, the Housing and Neighborhood Development Division (HAND) is overseeing the redevelopment of the block.

There is still a lot of work to do before companies can start relocating to the Granary.  According to Matthew Dahl, the deputy director at HAND, the Fleet Block and the surrounding neighborhood need significant utility and infrastructure upgrades before the area can accommodate new growth.

In a presentation to the RDA Board of Directors, Dahl stated that overhead power lines will need to be buried and that the water supply is insufficient for denser development and will need to be expanded.  Dahl also stated that the streets will need upgrades, referencing 400 West, a street that lacks curbs and gutters, has poor asphalt and an abandoned rail line in the median, as an example of the type of infrastructural deficits surrounding the Fleet Block.

The block also has some environmental contamination on the site, including petroleum contamination and asbestos in the buildings.

For innovative districts to be most effective, the Brookings report cites the need for connectivity and active mixed uses that bring density and diversity.

The Fleet Block is easily accessible by car with its proximity to the Interstate and downtown, but the neighborhood lacks public transit.  The city hopes to improve connectivity and encourage density by building a streetcar on 400 West that would connect to downtown.  The streetcar isn’t intended to just improve transit options in the neighborhood, but to encourage development as well.  Streetcars have been proven to be economic drivers by attracting development to the immediate vicinity of streetcar lines.

Dahl told City Council that HAND is planning to release a Request for Qualifications (RFQ) for the eight city-owned acres of the Fleet Block (1.5 acres are privately owned) in the fall.

Kitchen expressed the hope that any proposed project for the block includes affordable housing and that the block is separated into different parcels as the RDA did with the Station Center project.

“Eight blocks is a lot for one developer,” said Kitchen.

In preparation for redevelopment, the Planning Division is creating a new zoning district for the Fleet Block area.  Planning is proposing a FB-UN3 (Form Based Urban Neighborhood District) zone that would allow for building heights up to twelve stories and would encourage development that is “people-orientated” with various housing types and building uses.

Beyond the Fleet Block, to further encourage development in the Granary, the RDA will reach out to the private sector to redevelop a parcel at 901 South Gale Street, directly south of the Fleet Block.   The city will also use developer impact fees to create public open space in the district.

Even before the full implementation of the Granary District Strategic Plan, the district is already attracting new development.  Later this year, two breweries will open in the neighborhood.  Like streetcars, research shows that breweries also attract development.