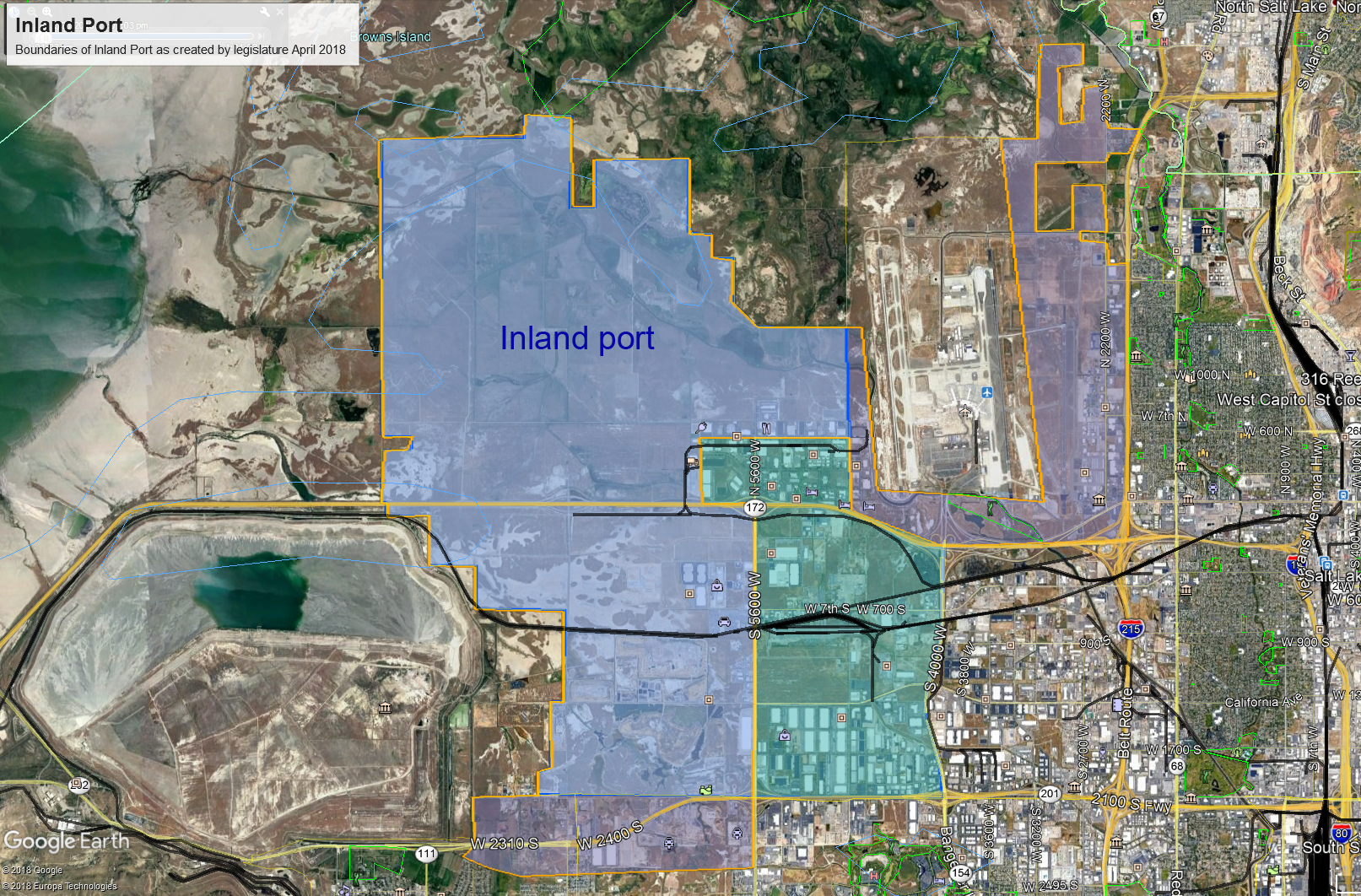 Envision Utah has a long history of bringing diverse groups together to find consensus solutions for some of the state’s greatest challenges. Its hallmark has always been the inclusion of various stakeholders in its discussions. Unfortunately, the organization broke with that tradition of inclusion during its annual breakfast held this week at the Grand America Hotel, when the group opted for a limited panel for a discussion of the proposed inland port.

Several hundred attendees listened to a four-person panel discuss the state’s plans for an inland port authority created by the state legislature in the closing hours of its last session. The port covers about 38 square miles including most of Salt Lake City’s Northwest Quadrant as well as parts of Magna and West Valley City.

The program began with a promotional video for the Kansas City inland port, which is apparently free of both dirt and people. All four panelists spoke in favor of the port.  A request by a member of the Envision Utah board to include an environmentalist on the panel was denied, citing the panel’s focus on “substantive” issues.

The port, which will process shipments through customs and transfer goods between rail and trucks, was touted as a far-sighted economic boon for Utah. Panelist, Adam Wasserman, Managing Partner of GLD Associates which specializes in logistics and the creation of inland ports, said that ports create a range of jobs including manufacturing jobs in companies that locate nearby. Salt Lake City’s central location in the western U.S. and its existing role as a hub of truck and rail traffic make it an ideal location for a port.

The state now controls land use policy and can keep up to 100 percent of the property tax revenue from new development. Mayor Jackie Biskupski has voiced the city’s vehement objections to these provisions, which she sees as an unjustified, and possibly illegal, appropriation of the city’s authority and tax base. The mayor is also among many local residents who say that the city was blindsided by last-minute changes in the bill. The Salt Lake Tribune reported that several key provisions were changed in the final version to the great disadvantage of the city. The bill also prevents local governments from protecting residents from environmental hazards posed by the materials (including coal) shipped through the port, prohibiting them from regulating these materials. In addition, the composition of the Port Authority Board favors rural over local interests, further depriving local residents of a voice in the actions of the Board. In spite of the controversy, the port exists, on paper, and the state is proceeding with their plans for the port.

The Envision Utah panel was supposedly limited to “substantive issues” of its economic feasibility and benefits. However, moderator Robert Grow immediately raised the issue of the port’s governance, calling it “the elephant in the room.” Derek Miller, the newly appointed President and CEO of the Salt Lake Chamber of Commerce, said he hoped that politics would not trump substance in discussions of the port.

The other panelists were more willing to address the issue. Natalie Gochnour, Director of the Kem C. Gardner Policy Institute at the University of Utah, stated that the port has an “obligation” to be responsive to the public. She also cautioned that the risks of ignoring public opinion about such projects are often underestimated, citing the Legacy Parkway project which encountered delays and additional costs due to public opposition.

Wasserman raised the danger of an adverse market reaction to the port if the community remains divided. Hanko Kiessner, CEO of Packsize International, made a plea for the port to be environmentally responsible and take all measures to minimize its impacts on air and water quality and public lands.

Gochnour praised the city for its excellent management of the growth of the Salt Lake City International Airport. She appeared to undercut the argument, made by state officials for assuming control of the port, that the project is too large for Salt Lake City to handle. Gochnour also implied that housing might be built in the port, citing the growing housing shortage and shrinking amount of open land in the valley.

The port’s impact on air quality was a major concern, both of the panel and west side residents who held a protest rally outside the hotel after the event. The port will vastly increase truck and rail traffic in the valley. With current technology, the high volume of truck and train traffic, as well as port operations, would substantially worsen the already poor air quality in the valley.

Kiessner said it is a “moral imperative” to clean up our air, saying it was an “easy decision”.

On a more pragmatic note, Miller mentioned the “looming crisis” of Salt Lake County’s nonattainment status with the EPA, which could allow the Federal government to impose stringent emission controls and stop the port’s development.

However, the general consensus of the panel was that, in Gochnour’s words, “we can figure this out.” Wasserman cited the example of the Los Angeles Port Authority which is electrifying its operations and pushing for cleaner trucks. He believes that these and other measures to reduce port emissions, while expensive now, will be routine in 15 years, which is approximately how long it will take the Utah port to become fully operational. He mentioned California vehicle emission standards and Tesla research as two forces propelling new technology.

There are other environmental concerns. According to Miller, water is the greatest constraint on developing the port. The legislature’s failed attempts to reduce Salt Lake City’s control of its watersheds will undoubtedly be revisited next year. Building more pipelines to bring oil and fuel to the port has also been discussed. No mention was made of possible effects on wetlands and wildlife, or the traffic and noise local residents will have to endure.

A great deal of work is needed before the development of the port can proceed. A full, objective environmental impact study must be performed. As the panel made clear, the public must be given opportunities to express their concerns and influence the course of the project. Finally, the state and Salt Lake City must come to an agreement about the control of land use and tax revenue. The city will bear the costs of police, fire protection and other public services since the port is mostly within its borders. It must be given a much greater say in the operation of the port and a greater share of its revenues.

David Scheer is an architect and urban planner based in Salt Lake City. He is an Associate Research Professor of Architecture in the University of Utah’s College of Architecture and Planning. He co-founded the firm of Scheer & Scheer in 1994 and has maintained an active architectural practice for over 30 years. The firm's award-winning work includes a variety of building types as well as urban design and planning projects.