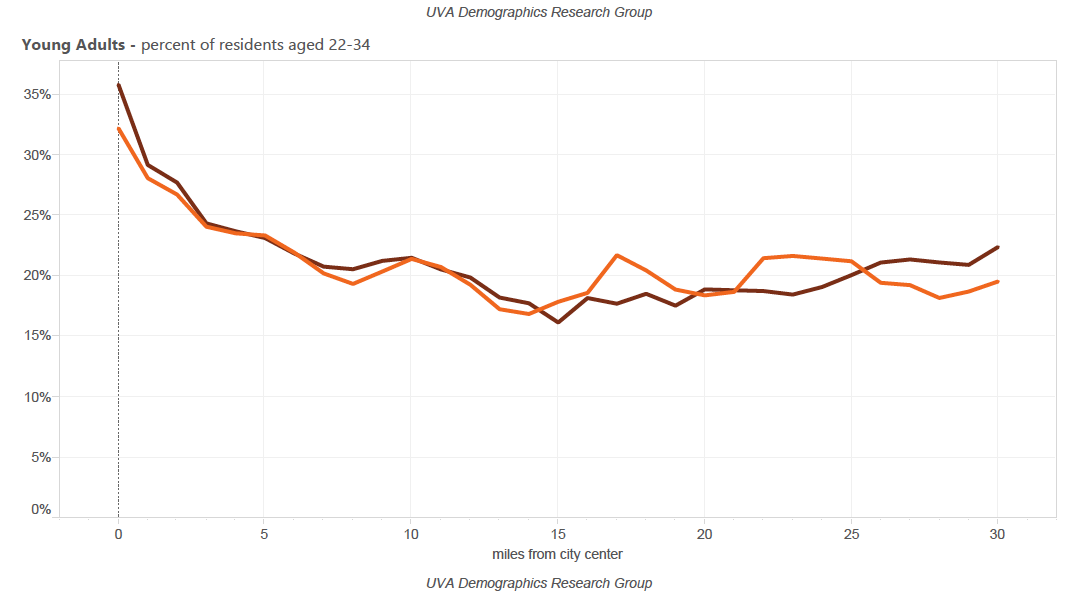 A new study by the Demographics Research Group, from the University of Virginia’s Weldon Cooper Center for Public Service, looks at demographic shifts in and around the city centers of 66 metropolitan areas, including Salt Lake.  The study and a corresponding data tool chart the correlation between varying demographics and distance from city centers between 1990 and 2012.

Salt Lake is not immune to the downtown migrations happening across the country. The study and corresponding data tool verify what many in Salt Lake have long suspected, that downtown and its surrounding neighborhoods are becoming younger, wealthier and more educated.  What makes Salt Lake unique compared to most other mid to large cities is that Salt Lake’s urban core has become less white since 1990, while other cities’ downtown and inner neighborhoods have recently become more white.

Over the past decade poverty rates in large city centers have dropped while increasing in the suburbs.  Salt Lake is no exception.  According to the report, Salt Lake City’s downtown poverty rates dropped by four percent between 1990 and 2012.  In comparison, poverty rates doubled from eight percent to 16 percent 30 miles from the city center over the same time period.

Unlike most downtown’s that saw an increase in the non-Hispanic white population during the 2000’s, downtown Salt Lake and surrounding neighborhoods are actually less white than they were in 1990.  The percentage of residents identifying as white dropped from 85 to 78 percent.  The communities within a 5-mile radius of downtown Salt Lake have the lowest percentage of residents identifying as white.

Salt Lake City and downtown are growing.   According to the Salt Lake Board of Realtors, 28.5 percent of Salt Lake County single-family homes sold in 2014 were in Salt Lake City, though Salt Lake City makes up only 16 percent of the county population. Hundreds of residential units have been added in the city since 2012 with many more currently under construction.  This generation of young adults is more inclined to use mass transit and desire walkable communities.  The challenge will be for Salt Lake and other cities to adapt to these changes.

Data for Salt Lake and other cities can been accessed here.