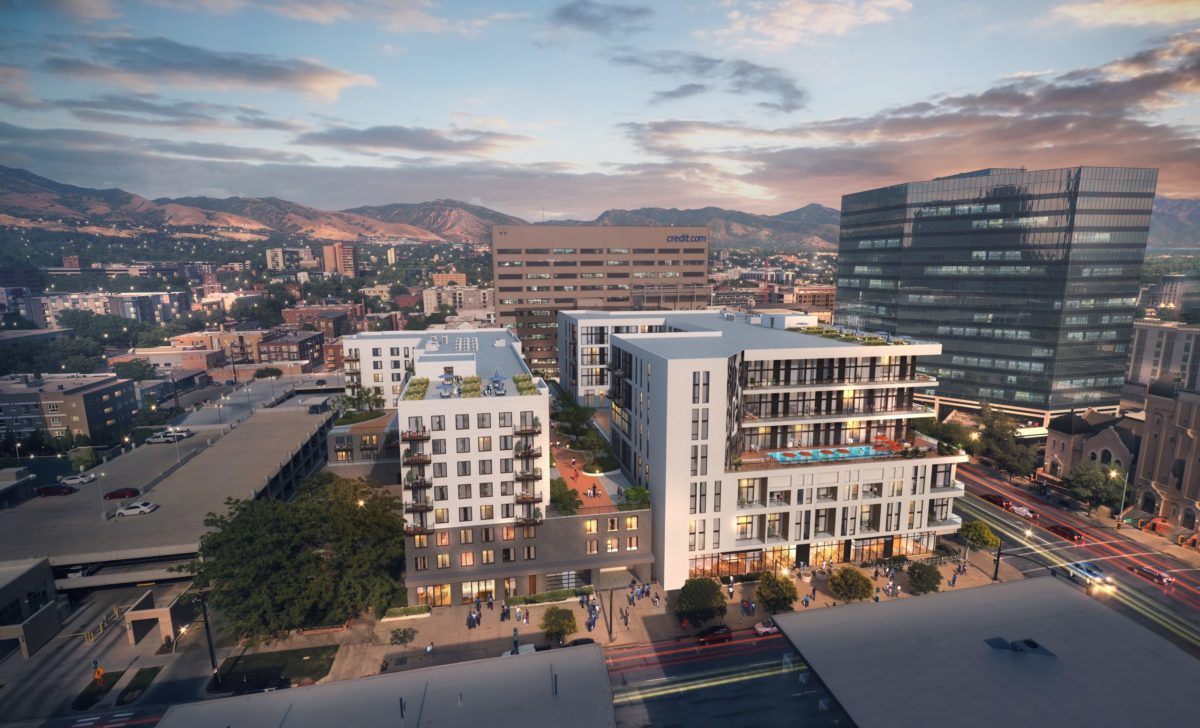 A hulking data center that has long created a pedestrian dead zone at 205 E. 200 S. would find a new life as a mixed-use building with space for hundreds of units under a forthcoming proposal.

The building’s Seattle-based owners talked with Building Salt Lake about the concept, which involves retrofitting the existing 350,000-square-foot building and adding a new eight-story structure on the property’s north end.

The proposal, the second announcement of a major conversion of a Downtown building in recent months, would bring 400 new rental units to the market and 10,000 square feet of retail in a building that would be unique in the market for a number of reasons. First of which is its 50,000-square-foot base.

“Initially, when you look at the building you think, ‘50,000-square-foot plate doesn’t scream multifamily at first blush,’” said Ned Carner, chief investment officer with Unico Properties. “We’re excited about it because you have this ability to create super unique units.”

Because of the existing layout of the building, which includes ceilings as tall as 19 feet, about half of the new units would be two stories. The ceiling heights in the other half are 17 feet and just shy of a two-story footprint. Those will have 17-foot tall ceilings, which is unheard of cubic space in most new-builds today. (For context, most new units often have 9-10-foot ceilings.)

“You kind of think about gutting the building down to a concrete shell and just rebuilding it,” Carner said. “We’re going to have a very, very well amenitized building.”

While the structure is only six stories above grade, the building reaches the same heights as some 12- or 13-story buildings and is considered a high-rise at 120 feet tall.

On top of that existing building is room for an acre of amenities. Renderings show a pool on the west side of the building, about half way up.

Units above the third floor will have spacious patios, said Gina Pfingston, a manager of investments and development at Unico.

“Those units have these patios that are so large they kind of feel like backyards,” Pfingston said. “We’ll have some turf and pavers. It’s going to have a kind of condo home feel to it.”

North of the existing building, on the site of a current surface parking lot, Unico plans to build an eight-story apartment building.

The conversion will help to anchor what has been a dead zone in the city’s urban core. The data center has long been one of two dead corners at the intersection.

C.W. Urban recently finished construction of The Randi at 218 S. 200 E. on the site of a former surface parking lot. The Second & Second building (at 177 E. 200 S.) recently became home to the People’s Coffee. A Methodist church sits on the final corner.

In total, the new project will bring about 400 new units. The team said it was too soon to provide an exact unit breakdown, and facade materials could still change during final design. But as of now the company is moving ahead with a conversion that’s significantly different from what it had in mind for the site.

Unico bought the two-acre property in 2017. The company also owned the historic Boston Building, one of Salt Lake City’s original high-rises, and owns 250 Tower across the street from its data center and City Centre One.

The company originally pitched a much different project from this one. In 2019, Unico proposed a new building that would barely meet the city’s minimum height for corners in the Downtown zone.

That proposal was also much more car-centric, with a near 2 to 1 parking ratio and a car plaza off 200 South. It also would have provided far less ground-floor retail.

The new concept saves on what would have been significant costs for demolition. It also preserves existing materials and will foster a unique concrete high-rise in the city’s urban core.

“This is converting a vacant, fully functional, obsolete data center that we acquired for almost nothing,” Carner said.

The company hopes to win city approval and permitting over the next year and break ground by early 2024. Construction is expected to last for two years.

Downtown by that point will be a very different place.

Editor’s note: This story has been updated to reflect that Unico previously owned the Boston Building, but is no longer its owner.