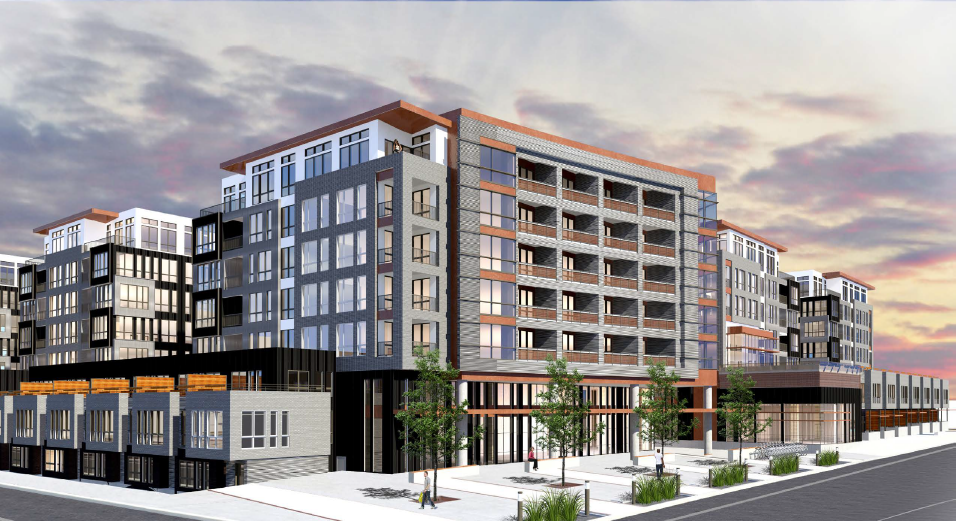 When developers, Boulder Ventures, first presented their plans for the Sugarmont Apartments to the Sugar House Community Council late 2015, outcry over the project’s size was loud and swift.

Many residents balked at Boulder’s plans to build a 10-story building with 492 residential units (120 units more than the combined total of the adjacent Liberty Village and Vue at Sugar House developments) on the site former Granite Furniture Warehouse near the intersection of McClelland and Sugarmont Drive.

In preparation to go before the Salt Lake City Planning Commission, the developers have officially submitted further scaled-back plans to the city.  Boulder Ventures is requesting approval to build an eight-story building with 352 residential units.

This is the developer’s third design for the Sugarmont.  After the initial presentation with Sugar House residents, the developers returned to community council a month later with new, slightly scaled back plans that reduced the project’s floor count to nine and the number of units to 433.  That design also split the building into two structures separated by a public walkway near the intersection of McClelland and Sugarmont Streets that would be incorporated into the local trail network,  instead of the large L-shaped building originally proposed.

The new design, by Denver based Studio PBA architects, retains the public walkway and will connect the two residential buildings with a five-story pedestrian bridge.  The plaza will occupy 11 percent of the total site area with the bulk of the plaza fronting the intersection of McClelland and Sugarmont and a proposed half-block extension of Wilmington Avenue directly east and north of the project.

The extension of Wilmington Avenue past Highland Drive will be part of commercial project by Craig Mecham Management, the developer of the adjacent Vue at Sugar House Crossing.  Mecham plans to build a 150,000 square-foot, seven story building with mix of commercial space and a clinic run by the University of Utah occupying the ground floor.

The project will consist of a three story platform with 19 townhome units wrapped around a a 460-stall parking structure.  Five wood-framed floors of residential will sit above the platform and will include 206 one-bedroom units, 93 two-bedroom units and 34 studio apartments.

The top five floors will be setback from the podium and will include a pool, roof deck and courtyard space for residents.  Most of the exterior units will have a private deck.  The townhomes fronting Sugarmont Drive will be two stories with a roof deck for the on the third level.  The townhomes fronting McClelland will be three stories and will include a private deck on the third floor.