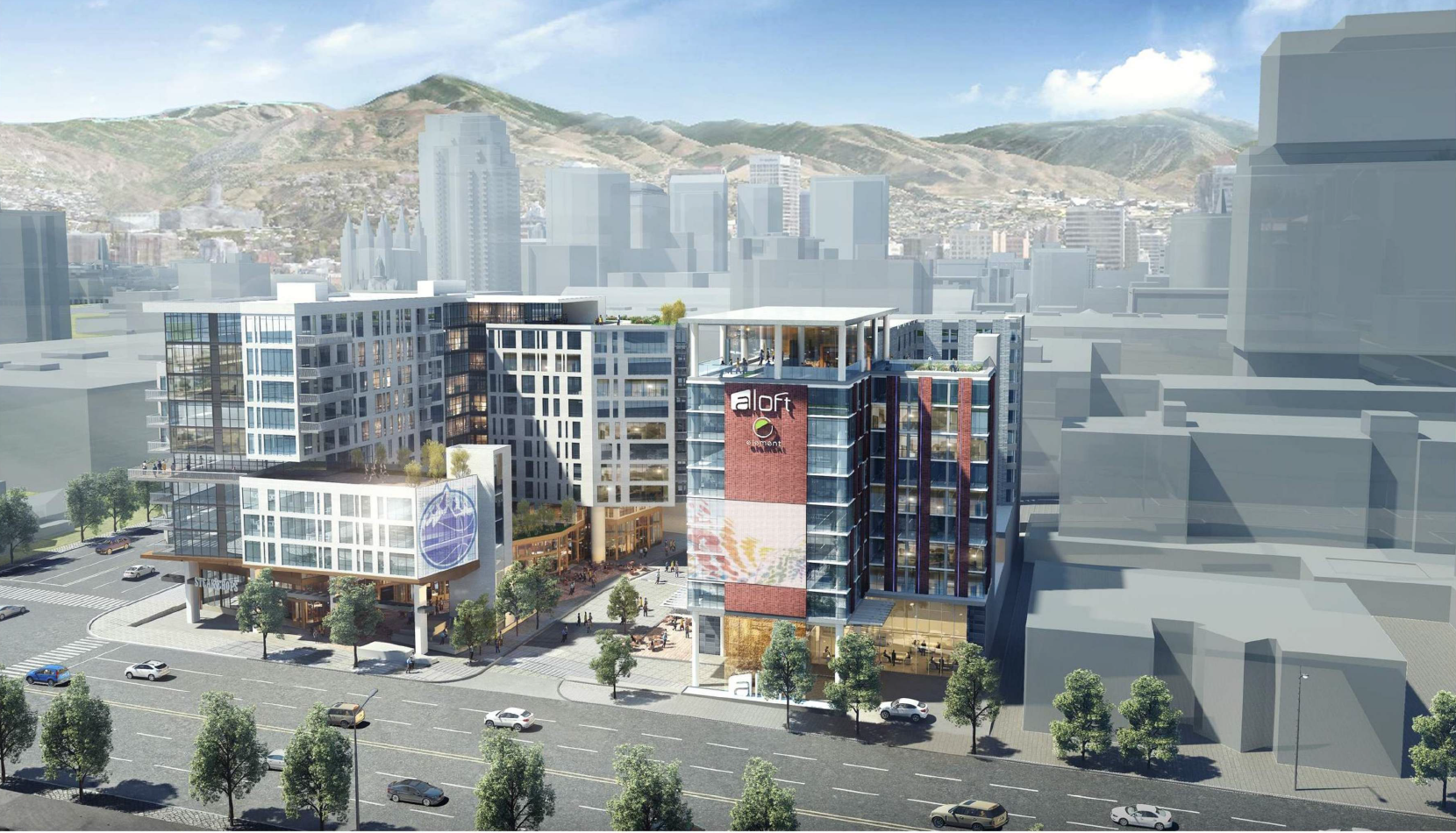 As has become the new norm in preparation for a public hearing with the Salt Lake City Planning Commission, developers The Richie Group sought feedback from the commission in a work session with the body during their August 24th commission meeting.

The developers are requesting from the city approvals for a zoning amendment, planned development, Conditional Building and Site Design Review (CBSDR) and conditional use for their plans for the redevelopment of Block 67, the block bounded by 200 West to 300 West and 100 South to 200 South.

The Ritchie Group wants to develop multiple buildings on 6.45 acres at the northwest and southeast corners of the block, replacing the Royal Wood Plaza building, a parking structure and a surface parking lot.  The developers will break up the large project into four smaller blocks via a curved throughway street that will connect 300 West to 200 South.

“It’s going to be a great enhancement of what today is an asphalt parking lot in a key part of town,” said David Abraham of Architectural Nexus.  “We are hoping to really improve the use of this area and make some connections in town.  I think we could really improve the experience.”

The project would be built in two phases.  The first phase will focus on the redevelopment of Blocks A and B at the block’s northwest corner and will include two mixed-used buildings that will consist of a mixed-use residential building and a double-branded hotel building.  Both buildings will be 11-stories tall.

The proposed street will be designed to accommodate both cars and pedestrians with traffic calming elements and formal and informal plaza space while also allowing for loading vehicles and through traffic.  The street will be programmable like the Regent Street and will utilize a similar design that will allow the street to be easily converted into plaza space for events.

“It really wants to feel like a car is in the plaza and rather than we are trying to make a plaza out of the street,” said Abraham.

Because the developers don’t plan on surpassing the 375 foot-threshold, they are also considering a request to expand the zoning overlay district, approved by the City Council in 2016, for the Salt Palace Convention Center parcels instead of complete rezone.

“I see this as somewhat of a bridge between downtown proper and all they way through the Gateway,” said Abraham. “This element could be kind of beacon to draw people around the convention center.  This could be a landmark to draw people across town.”

While previous work sessions for large-scale developments have tended to last for several hours, Wednesday’s work session with The Ritchie Group was relatively brief lasting about an hour.  In general, commission members appeared relatively satisfied with the project details.

The developers will need to return to the Salt Lake City Planning Commission for a formal hearing for a CBSDR, zoning amendment and a planned development request.  The developers hope to break ground on the first phase by spring 2018.