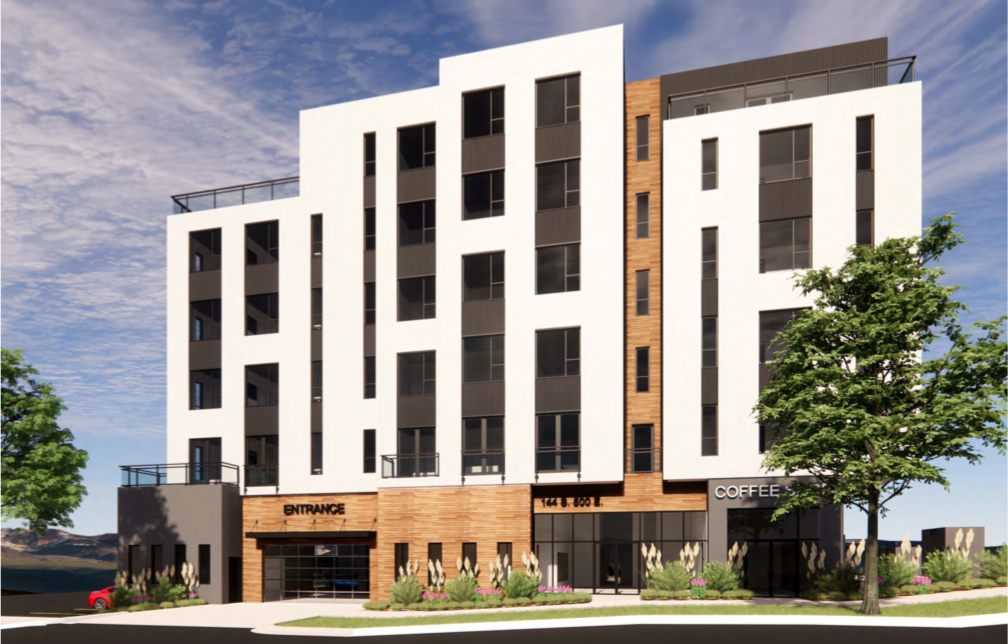 It will also offer a ground-floor co-working area (1600 sf) for residents as well as a small retail space (420 sf).

That is, if it can complete a financing package that has gotten more complicated and expensive thanks to demands from HUD that it provide a parking space for each unit.

With its location steps away from 200 South, the city’s busiest bus corridor, and a Trax stop three blocks away, it’s hard to believe that every resident in a studio and 1-bedroom LIHTC building will own a car.

Yet the mandate from HUD caused the developer, Peter Corroon of 144 South Apartments LLC, to add a second level of underground parking (three levels total) and apply for planned development approval at the Planning Commission to exceed parking maximums in the R-MU Residential Mixed Use zone.

The city approved the planned development in October.

With an agreement to provide an additional 26 stalls for the apartment building to next door to the north, the Ben Albert, the project was aiming for a .85 to 1 ratio, according to the Planning Division’s staff report.

The Housing and Urban Development (HUD) office in Denver, however, is requiring 1 to 1.

“This required us to go down another level with parking at a cost of about $1 million. We tried to push back against HUD but they would not compromise,” Corroon told us.

“HUD’s parking requirement has been the biggest issue in making this project pencil financially,” he added.

The developers noted that at 69% glass at street front, the building is exceeding the RMU minimum ground floor glazing requirements of 40%. In addition to the first floor retail and co-working spaces, the project plans a gym, clubroom and large outdoor patio on the second floor.