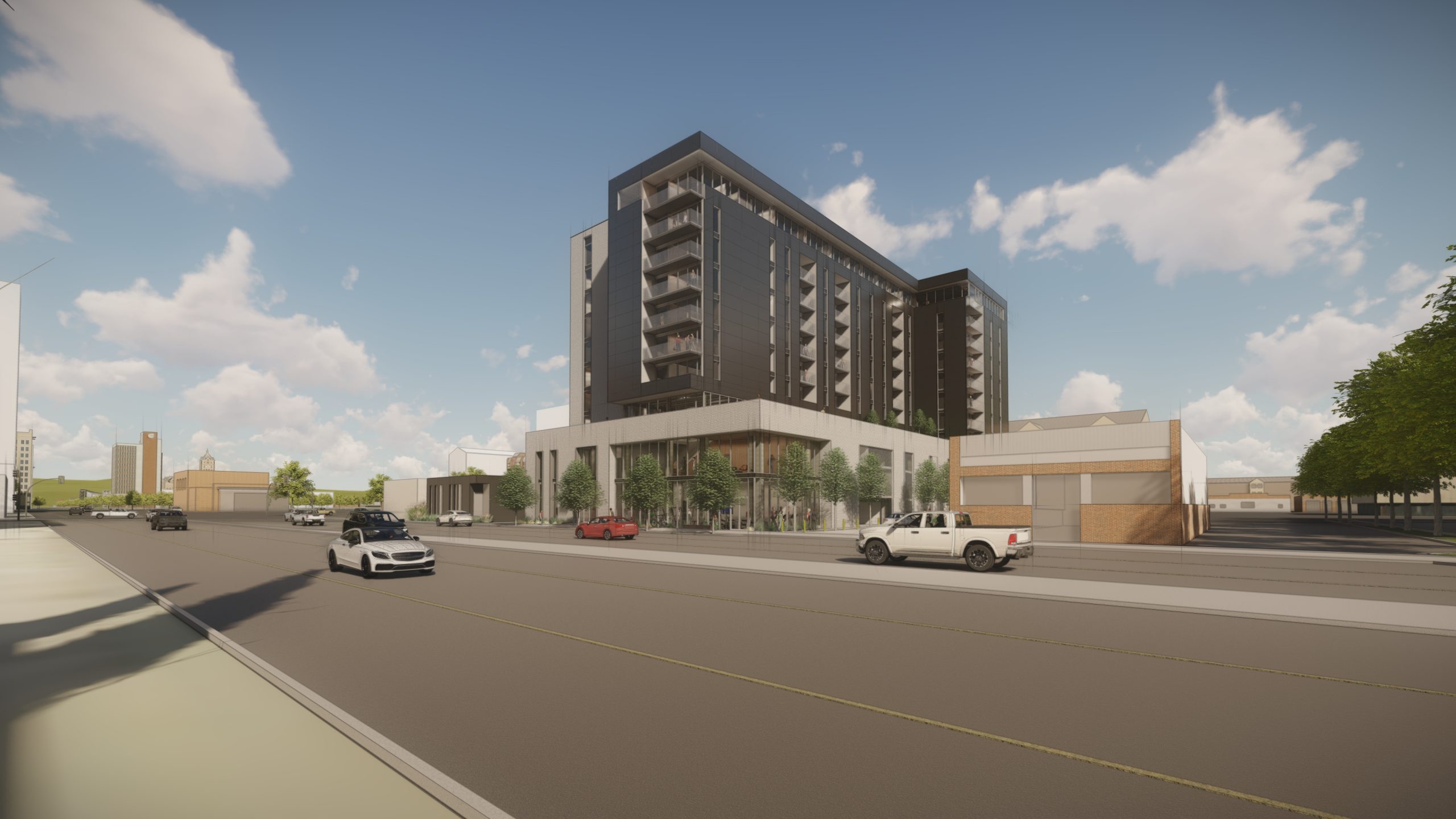 Two residential projects in “a sea of asphalt” in South Downtown will be bringing some beneficial urban design and density in and around 400 South and 200 West in Salt Lake City.

But will they be enough for this part of the city to overcome I-15 to the west and UDOT running city streets like on-ramps?

This intersection is a clash of auto-centric and urban design that hosts one of the city’s few protected bike lanes (200 W) – plowed through by UDOT’s State Route 186 (also known as 4th South, Foothill Drive, and 3rd West).

A large apartment project and a social club are under construction on the block immediately to the northeast of the Bookbinder and BRIX, which are both market-rate apartment buildings.

The pioneering residential projects on the block will be introducing themselves to a lot of surface parking lots, several motels (Hampton and Crystal Inns), a legacy florist (Especially for You) drive-thrus (McDonald’s and Street Tacos), a Denny’s, and, among other auto-oriented businesses, a windshield repair shop.

Both the Bookbinder and BRIX projects are in D-2 Downtown Support zoning, which allows height from 66 to 120 ft with design review by city administrators and the Planning Commission.

Bookbinder, a podium plus five, asked for 83’, while BRIX pushes its 11 stories to 115’. Both were approved by the Planning Commission.

The question arose during public comment whether the projects should be in design review at all. The remarks came not from a developer, but a former Planning Commissioner, landlord, and preservationist.

Referring to the Bookbinder project, Cindy Cromer commented, “It’s time we do something so that planners aren’t spending time on proposals like this – additional height in a sea of asphalt.”

“As a point of historical context,” she told the Commission, “Buildings of this height used to be allowed all the way to 700 East.”

“These units are quite modest and will be modestly priced and have been delayed arriving in the marketplace by the amount of time this petition has been in the Planning department – even if it’s just a couple of months. Someone who is providing modest housing in this situation should have all sorts of the city’s requirements waived, including permitting fees, because we desperately need the housing.”

Molly Robinson, the City’s Urban Designer, acknowledged Cromer’s comments while saying “the design review process, when we have a building that is larger than the base maximum height, was a pretty big discussion at the Planning Commission.”

Robinson continued, “Whether you’re asking for 2 or 25 feet, the Commission was at the time very interested in maintaining that power of review. The intent is to ensure a higher quality of design for buildings that are going to have a larger impact [because of their increased height].”

Bookbinder, developed by OZ9 Opportunity Fund LLC, out of Lindon UT, was at the Commission originally for 2 review items. The first was reduction in the number of operable building entrances, which the code requires every 50 ft on street-facing building facades. The second was the height allowance.

Planning staff recommended waiving of the building entrances review, as the developers apparently made a compelling case that the garage opening on 200 W qualified as an opening.

Two historic buildings along 200 W were demolished for the project. The city wrote, “The structures are both National Landmark Sites (Albert H. Kelly House and John B. Kelly House) that have been listed on the National Register of Historic Places. Though they are nationally listed, there are no City preservation regulations to prevent the structures’ demolition.”

Jonathan Kland, architect for Line 29 Architecture based in Herriman UT, told the council that the development team had “Taken great inspiration from the original homes that were on the site, including the name of the project, as well as the remembrances from the site in the lobby that will be visible from the street to pedestrians.”

The Kellys, the first binders of books and printing company owners in the city, according to the Historic Register, gave themselves the middle name of “Bookbinder” – where the project’s name comes from.

BRIX, by High Boy Ventures and ajc architects, expressed to the Planning Commission that they were “really, really happy with the results” of their design review with the City.

A mid-block walkway is required on the project’s west border.  Now the building’s amenities deck, reoriented to the west thanks to design review, will overlook the walkway.

Ajc representative Justin Heppler told the Commission that his team had added balconies and shifted the project’s shared terrace to the west side of the structure. “Putting eyes on both the midblock walkway and 400 South as it wraps around the building.”

Before design review by the City: