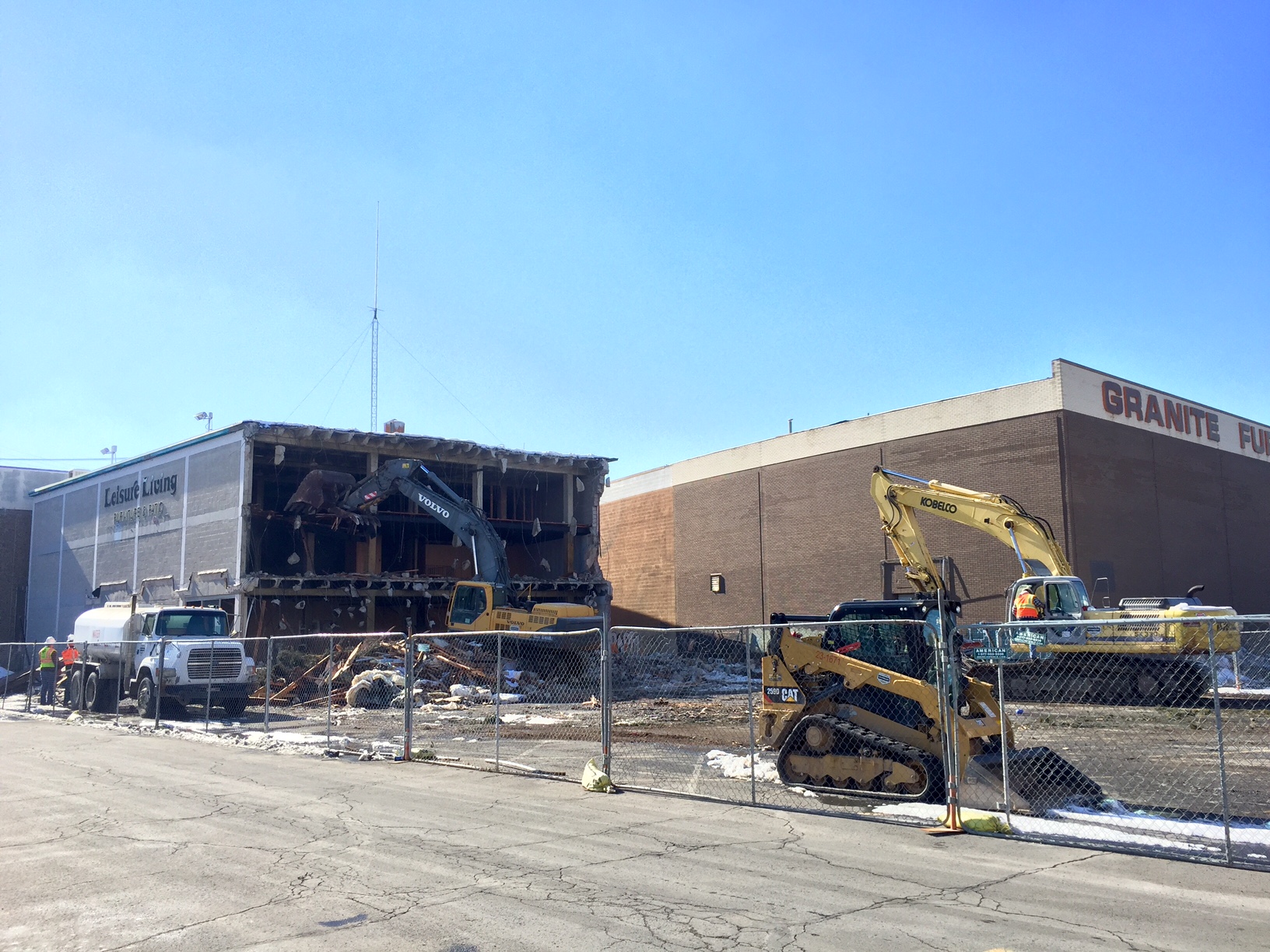 Sugar House’s evolution continues. Demolition work has begun on the former Leisure Living warehouse, to make way for construction of the Sugarmont Apartments, a proposed mixed-used development a the intersection of McClelland St and Sugarmont Drive.

Boulder Ventures Development, is building the project which will be adjacent to their offices in the  renovated former Granite Furniture Store (another Boulder development) at the northwest corner of the block.

The project would be directly across the McClelland Street from the current terminus of the S-Line streetcar.  The city proposes extending the streetcar east along Sugarmont Drive, which would have the streetcar running along the south-facing-side of the development up to Highland Drive.

The project’s height and scale were contentious issues for residents at two recent Sugar House Community Council meetings.  The original design was deemed too large and out of scale for the neighborhood, leading the project’s architect, Russ Platt of Russ Platt Architects, to make revisions.

According to Platt, the updated design has a more human scale.  The proposed height of 100 feet remains unchanged, but Platt removed a floor from the podium level to make the building feel smaller at the sidewalk level. Platt also set the third and fourth floors farther back from the street level.  Ground floor residential units and ground floor commercial space have been designed to interact at the street level, with the entrances to the residential units and patio spaces fronting the street.

The project will include a public walkway intersection the development from Sugarmont Drive.  The walkway will open to outdoor space and provide a pedestrian connection to the Sugarmont Monument Plaza and retail at the north and east sides of the block.  Boulder Ventures will also partner with the developers of the Vue and Sugar House to build an extension of Wilmington Avenue that will bisect the block and allow new residents to access parking structures in both buildings off Wilmington.

The developers can build up to the height currently proposed, but they can not get a building permit until they go before the Planning Commision for a Site Design Review, where the materials and design will be scrutinized.

If built as currently proposed, the Sugarmont Apartments would be the second tallest development in the Sugar House Central Business District.  Construction is underway on Legacy Village, a 10-story mixed-use project on the 1200 East block of Wilmington.  That project will be 20 feet taller than the current proposal for the Sugarmont development.

*this post has been updated to correctly label the warehouse being demoed.