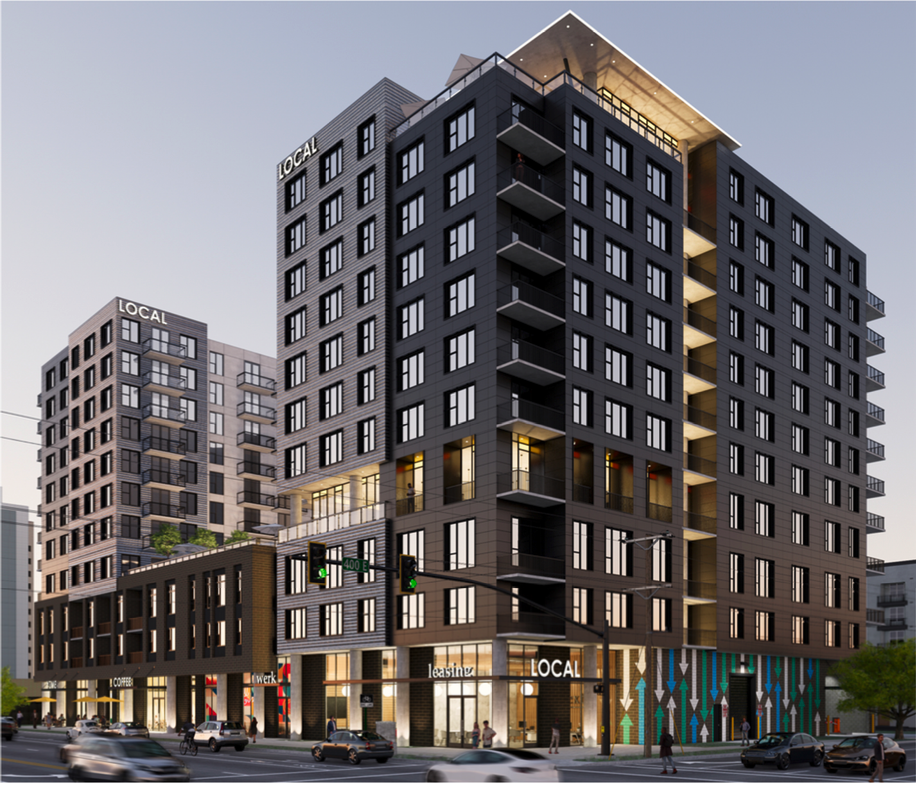 Membership sale. Get access to exclusive site features, like our Salt Lake City Projects Map and Database, our Enhanced Search function and first dibs on future events at a discount through June 21. Consider becoming a member to Building Salt Lake today.

Developers would replace a pair of one-story buildings, including a local drive-thru burger joint, with a 12-story apartment building on 200 South under a new proposal with the city this week.

The development at 377 E. 200 S. in Central City would provide 250 dwellings between studio and two-bedroom apartments, along with 5,500 square feet of ground floor retail.

The St. Louis-based developers are asking for permission to build up to 125 feet tall on the corner site, reduce the building’s lone required setback and cut ground floor open space in order to build the structure.

If approved and built, it will continue the ongoing development of high-density urban housing along 200 South, with multiple gaps and underbuilt buildings replaced along the way.

“LOCAL will be a beautiful building with a modern look and feel. It will be designed in an environmentally- and energy-conscious manner. It will be amenitized for a high quality of life,” they wrote. “The ground floor retail and other design aspects will help activate the 200 South streetscape and provide for walkability. LOCAL will further increase the housing stock in downtown Salt Lake City and contribute to the ongoing renaissance of the area.”

The development company, Subtext, and local designer Dwell Design Studio, filed design review and planned development applications to explain some of their design choices for the building, which hasn’t yet been finalized.

Rather than stepping the building back with the additional height, Subtext said it was matching the other buildings in the immediate area.

Indeed, Cottonwood Residential is wrapping up a six-story apartment building across the street that is an entire Salt Lake City-block long. Other similarly tall buildings aren’t stepped back, so LOCAL would largely match the existing development pattern along 200 South.

“The design of LOCAL is intended to activate the 200 South frontage,” the group wrote in its application. “Therefore, providing open space on this facade goes against the intent of the development.”

“The best practice currently is to provide amenity space at the podium level,” they wrote.

The developers are proposing garage access to the building’s five levels of 271 parking stalls from 400 East, which they say requires them to provide less glass on the first floor than required.

The building would include a bike storage facility (a much-needed yet rarely provided amenity among most similar apartment buildings in Salt Lake City).

Subtext said people can access the 5,500 square feet of retail space from the sidewalk on 400 East, though it appears from the renderings that 200 South will have an active pedestrian entrance to retail, as well.

1. Increase the height from 75 feet to 125 feet, which is allowed with design review

3. Provide no ground level open space (instead of the 20 percent required) and instead move it to the fifth story and rooftop

4. Allow the loading berth driveway to be located along 400 East (in what would be the “front yard” of LOCAL)

5. Modify the glazing requirement on the 400 East side and allow a public art mural

The applications were filed alongside letters from the owners of Crown Burgers, who have sold the building to the developer.