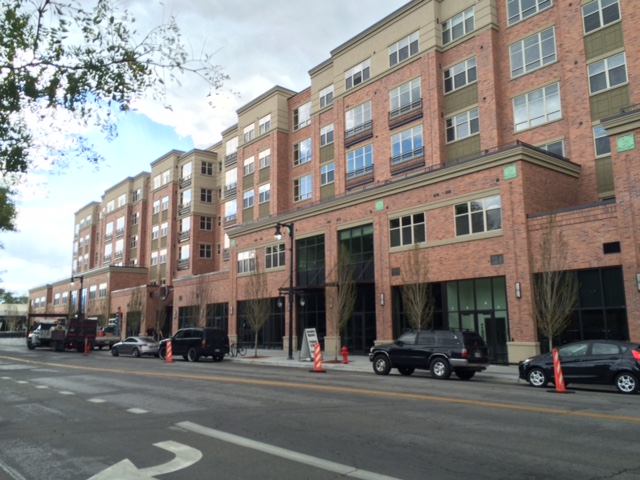 “I appreciate all the great input we’ve had from the community about this,” said Council member Lisa Adams. “I think we have come up with a good compromise.”

The amended version will still create two new form-based zoning districts: FB-SC (Special Purpose Corridor Core Subdistrict) and FB-SE (Special Purpose Corridor Edge Subdistrict) but will limit building heights in the FB-SC to 60 feet and up to 75 feet for projects that reserve at least 10 percent of their residential units for affordable housing.

The majority of the parcels that would be affected by the corridor plan are currently zoned CB (Community Business) and RMF-35 (Residential Multifamily).  The CB zone regulates by building size instead of height, currently allowing up to 20,000 square feet.  The RMF-35 allows for multifamily developments up to 35 feet in height.

Both the FB-SC and the FB-SE zoning district would accommodate mixed uses but commercial would be limited to the first three floors and two floors respectively.

According to Adams, while the Sugar House Community Council expressed support for the corridor plan, it was lukewarm.  Adams argued that the reduced height amendment had more widespread support from the community council.

The motion passed by City Council also removes language from the original ordinance that called for removing the right hand turning lanes on 700 East between 2100 South and the 700 East Streetcar station.  The lanes were to be removed and replaced with on-street parking and a bike lane.  The changes also mean that the dead end at the south end of Green Street will be maintained after the Council voted to remove a proposed connection of Green Street to Wilmington Avenue.

The City will also no longer pursue creating a transit-supported development for the city-owned parcel at the intersection of 900 East and Sugarmont Drive.  That parcel currently consists of under-maintained tennis courts.

During Tuesday’s work session that preceded the formal council meeting, several council members questioned if the height reduction amendment was even necessary for the streetcar corridor.  To build up to the 105-foot height limit in the original ordinance would require developers to build a steel-framed structure.  Under local building codes, wood-framed structures can not exceed five floors.  Developers can get additional height by building concrete platforms under the wood-framed structure, but that requires a large footprint.

“What we are seeing even in the areas that allow for steel is that developers are still building wood,” said Council member Stan Penfold.

Although Council approved a subdued form based code for the streetcar corridor, they did move to make request changes to the FB-UN2 (Form Based Urban Neighborhood) zoning districts  by including legislative intent to potentially allow the rear and interior yard and upper-level setback requirements under the zoning ordinance for FB-UN2 not be contingent on being adjacent to FB-UN1 zones.  The city uses FB-UN1 zone codes, which restricts building heights to 2.5 stories, to create a buffer between higher density development and lower density residential.

*This article has been updated to accurately describe the legislative intent motion for changes to zoning ordinance in respect to the FB-UN2 zone.