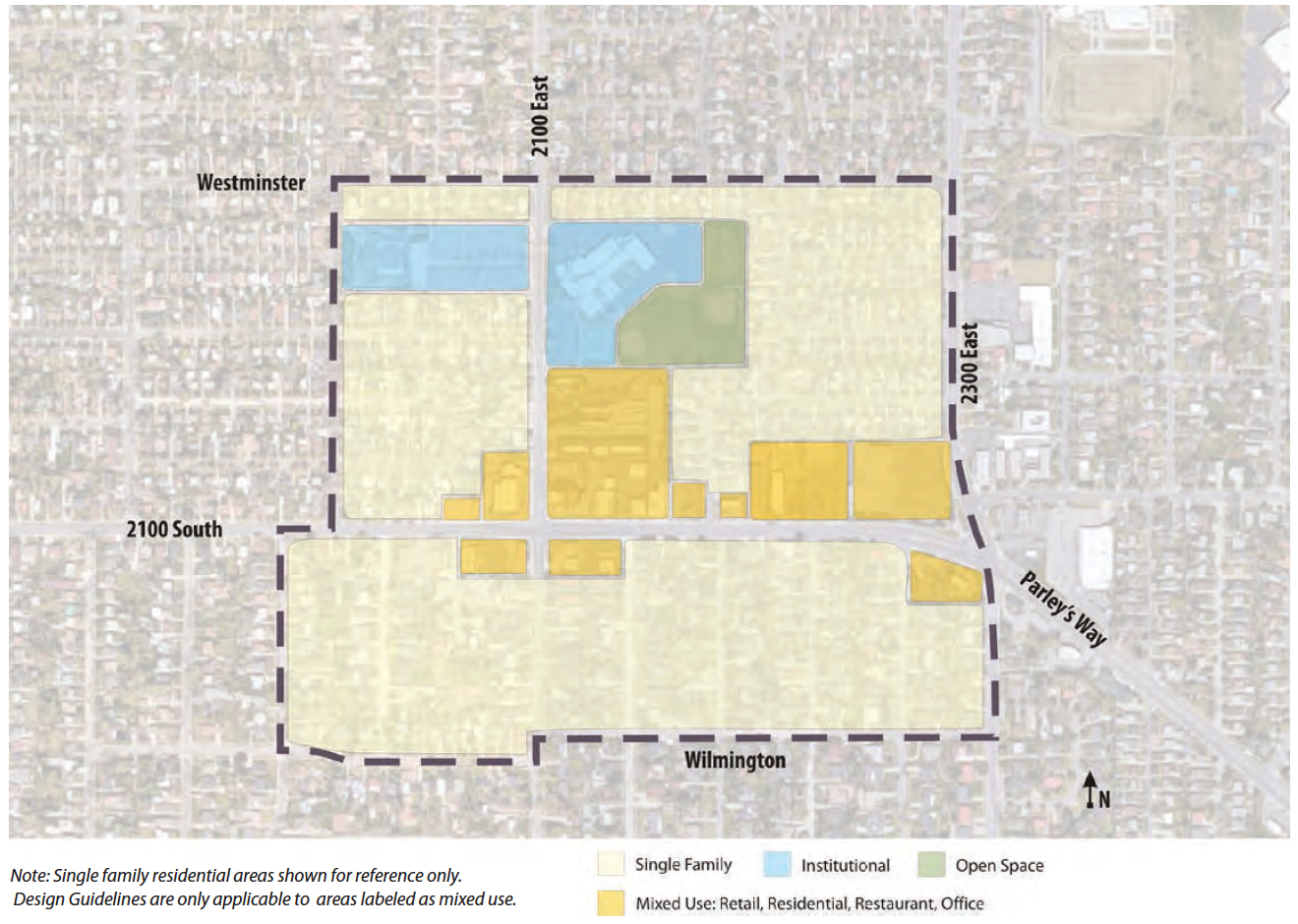 According to planning staff, the draft plan does not advocate for zoning changes, building height bonuses or a change in allowed uses to any properties in the plan area but instead seeks to add design regulations to the commercial parcels along 2100 South and 2100 East that under current zoning allow for mixed-uses.

“The plan is not an attempt to create an extension of the Sugar House Business District,” said Salt Lake City Senior Planner, John Anderson.

The draft plan process was initiated after the development community expressed interest in redeveloping the 21st and 21st business district.  Since the initial meeting with the community in 2014, residents’ concerns have focused on of large-scale development in the area and the loss of single-family homes.

According to Anderson, the city has spent the past two years talking to neighbors and area business owners on their vision for the commercial node.  Residents have been very involved in the plan area. Anderson estimated that on average open houses discussing the 21st and 21st area plan attracted between 400 to 500 residents.

Planning staff designed the draft plan with the intention to guide development to create a unique destination (in the vein of 9th and 9th), support local business while providing more commercial opportunities and establish design guidelines that enhance the pedestrian experience and vibrancy of the corridor.

Under the draft plan, buildings along the commercial corridor would be built up to the street level, but with a partial setback to provide public (sidewalks, bike lanes, street trees etc) and semi-public open space (front yard and plazas) between the building and road. Parking would be required to be behind the building or in a subterranean structure.  Materials and scale would be regulated under the plan to ensure that projects are broken up visually to avoid the “wall” effect created by single scale, monochromatic buildings.

The majority of the commercial areas in plan area are zoned CB (Community Business) which allows for mixed building uses, multifamily development and restricts building heights up to 30 feet.  Because the draft plan calls for ground floor commercial space to have a floor height of at least 12 feet, several property owners argued that it would be difficult to build up to three stories.  Typically under the planned development process developers can gain an extra five feet of building height (which would allow for three stories) by going through the planning commission.  A parcel to the north the CB zone on 2100 East is zoned RMF-35 (Residential Multifamily) which allows for building heights up to 35 feet.

“This is the least intense commercial zone available,” said Anderson.

According to the city’s definition of the purpose of the CB zone, is “to provide for the close integration of moderately sized commercial areas with adjacent residential neighborhoods.  The design guidelines are intended to facilitate retail that is pedestrian in its orientation and scale, while also acknowledging the importance of transit and automobile access to the site.”

Several commission members expressed a concern about the 30-foot height requirement that it would create a wall with developers all building to the maximum allowed height.  Commission members suggested that certain design elements at the roof level could be an exception to the height limit to encourage more aesthetically diverse development at the pedestrian and rooftop levels.

Another key component of the draft plan is the enhance the pedestrian experience with wider sidewalks and increased pedestrian connections on 2100 South. The small plan area borders the proposed traffic calming and pedestrian enhancements in the Parley’s Way corridor plan.