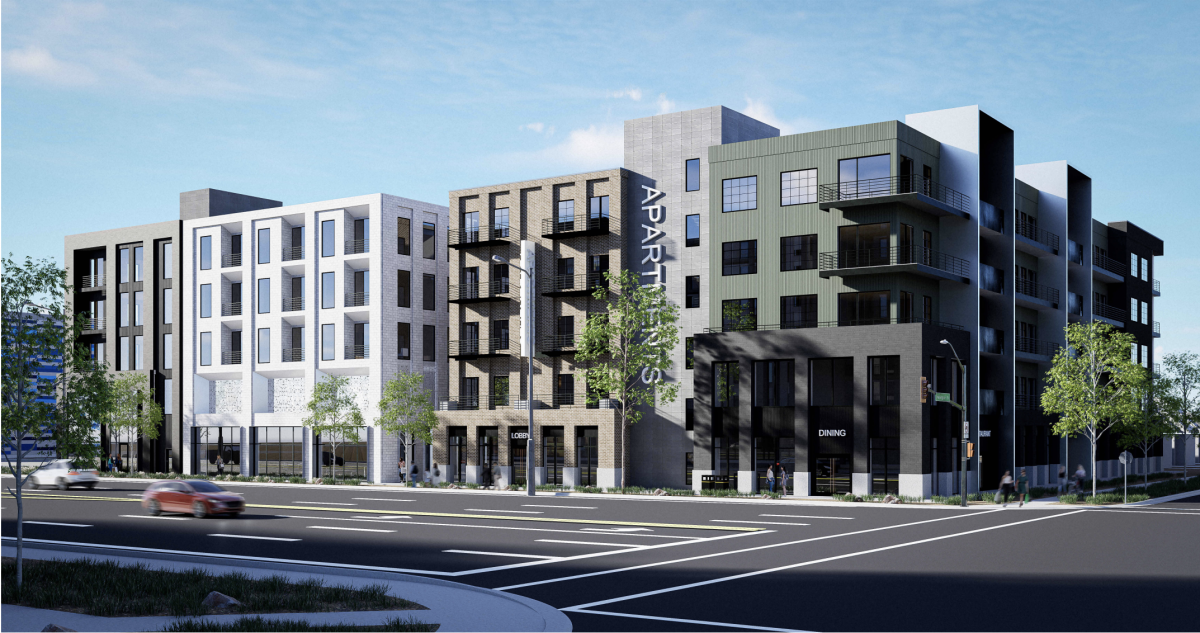 About a year after its plans to develop the Sears Block in Midtown fell through, the local development group released plans for its second significant project on State Street in the Liberty Wells neighborhood.

The mixed-use apartment project at 1435 S. State provides a look at the future of the corridor, as the city flirts with widespread rezoning along the road and the county recently ended a years long standoff with the city to create a new State Street Community Reinvestment Area.

The new project would bring space for hundreds of people to live just outside Downtown and on a high-frequency bus route.

“1435 State will bring an elevation of architectural style, much needed housing units, additional retail and will improve the safety of the area,” a Colmena representative wrote in a request to rezone the property.

The proposal also seeks to change the master plan for the Central Community, which includes Liberty Wells.

The project uses a mix of materials to visually break up two separate five-story buildings starting at Cleveland Avenue and heading north. (Note, this is not the site of the former Coachman’s diner, whose owner is also preparing to develop a mixed-use condo project closer to 1300 South.)

According to a set of plans included in the rezone application, the project looks to bring 181 new attached homes in a mix of studios through three-bedroom apartments.

It would provide 173 parking stalls and an unknown amount of bike parking, although the recently approved off-street parking changes require one space to store a bike for every two residential units in the FB-UN2 zone. That would bring 91 bike parking spaces in a project that’s a pedal away from the 200 East Neighborhood Byway.

The development appears likely to at least temporarily displace Coco Wok while possibly making space for it to return after construction.

We reported in September that Colmena had teamed up with the development group Maven for a multi-building, mixed-use project closer to 1800 S. State, half a mile south of this new development.

Both projects should consider voluntarily expanding the sidewalks adjacent to their properties to actually create a welcoming and walkable development for residents and visitors, a stated goal of the 1435 State project.

“This area of State Street is in great need of elevated and thoughtful design and 1435 State delivers just that, all while integrating with existing public transit and creating a dynamic residential and commercial node,” the developers said. “A node where existing residents can enjoy by creating a pedestrian friendly multi-use urban neighborhood.”