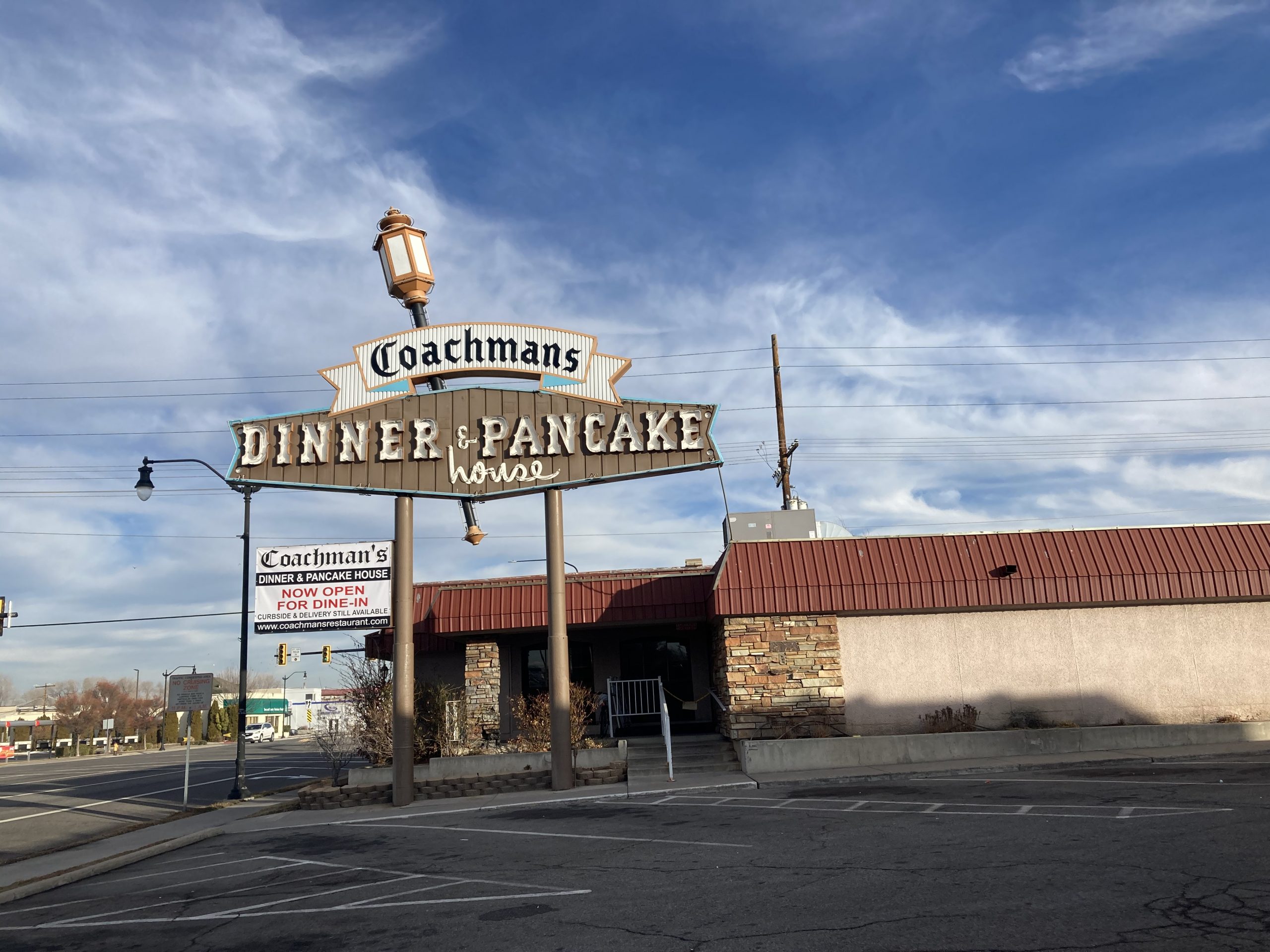 Salt Lake City’s time with an iconic if mysterious restaurant on 1300 South State Street may be running out, as the owner has equally mysterious plans to redevelop his properties in the area and the City Council appears ready to pave the way for the changes.

Coachman’s Dinner & Pancake House has for years tempted passersby on US-89 to stop in and see what they thought. “Come in, you’ll be pleasantly surprised,” the now-removed sign once read.

The owner is now asking the city to rezone his properties into a zoning that would allow for a range of new developments. Only then would he make public what he has in mind.

“I’m not gonna say anything until I can basically find out what they’re (the City Council) willing to, ya know, do,”  said Mike Nikols, who owns the restaurant and adjacent office space to the south. “If they’re willing to get the zoning that I need, everything will be basically tailored to that zoning.”

Nikols has loosely told the Liberty Wells neighborhood and city planners he’d like to replace his existing buildings with a mixed-use building that includes ground-floor retail and owner-occupied condos above.

“All I can say is once they (vote) then I can spill the beans,” Nikols added. “I’ve got some really good things in mind.”

The Planning Commission has already unanimously approved the request, and City Council members spoke favorably of what several called a possible “catalytic project” in the State Street corridor.

“It sounds wonderful and I’m excited to see something happening there with the new zoning,” Councilwoman Ana Valdemoros said.

Utah’s management of State Street as a highway, rather than a city street, has led to zoning that attracts businesses that you might find along state highways, guided by Commercial Corridor (CC) zoning.

But because the city controls zoning, Nikols is effectively asking for a change to his properties and permission to develop his properties into something with more height, mixed uses and less required parking.

While he’s been unwilling to share any details of what he has in mind before action from the city, the zoning he’s asking for has a long list of possibilities.

FB-UN2 zoning allows for buildings up to 65 feet tall, with taller buildings on corners. Buildings in that zoning can include a single use or mix of commercial, office and residential. Development regulations are based on building type.

Commercial Corridor zoning already allows for a number of uses. It’s part of the reason developers have flocked to Ballpark, bringing mid-density row houses into a sea of lax zoning.

Councilman Darin Mano, who represents the area that includes Coachman’s and the Ballpark, called on the city to put more focus and updated zoning for the whole neighborhood.

“My fear is that this neighborhood is just going to be the result of a patchwork of different zones based on which developers want to do,” Mano said. “I like what this would do to the neighborhood, but I hope we can invest more energy into more of a whole comprehensive look at the Ballpark neighborhood and State Street.”

The new zoning, if approved after a public hearing in early March and vote in mid-March, could allow for a high-density development, but it comes with far more city oversight on design than the existing commercial zoning.

“It is Planning staff’s opinion rezoning the subject parcels to FB-UN2 would facilitate the cost-effective mixed-use buildings and better urban form,” planners wrote in a recommendation to the City Council.

Any potential new development could bring with it more eyes on the street across from what is a particularly troubling spot in the city, near a cluster of homicides over the past two years.