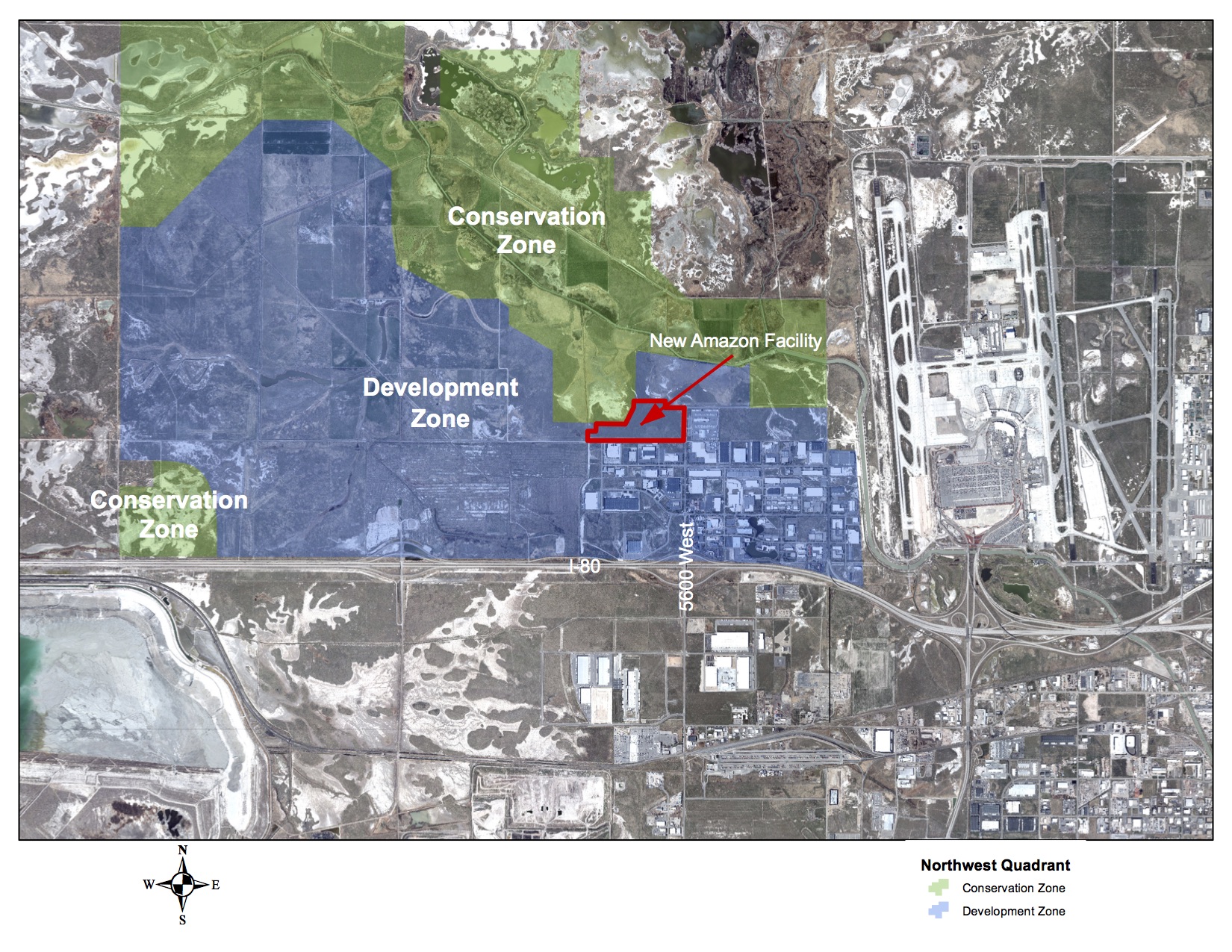 Plans to develop over 3,000 acres of largely vacant land at the western edge of Salt Lake City have made significant recent progress.  In their first two weeks as a new council, the Salt Lake City Council, acting as the Board of Directors of the Redevelopment Agency of Salt Lake City (RDA), have approved two developer agreements and adopted the creation of a Community Reinvestment Area (CRA) Plan for the Northwest Quadrant (NWQ), a 3,000-acre area north of Interstate 80 and west of the Salt Lake City International Airport.

“Salt Lake City recognizes the complex nature of developing the Northwest Quadrant to maximize the economic potential while preserving the sensitive environment of the area,” said Salt Lake City Mayor Jackie Biskupski in a statement. “In creating this plan, we have collaborated over the past 19 months to come up with a strategic way to move forward, ensuring all key stakeholders were at the table.”

City officials envision the quadrant and the area just south of the interstate as an innovative Eco-Industrial District with light industrial and manufacturing centers and a potential inland port.  Additionally, plans for the NWQ call for a mixed-use “gateway to the city” for the area surrounding 7200 West and Interstate 80.  The plan calls for that area to potentially include regional transit connections and four and five-story commercial buildings, including offices and hotels that would serve as the western access point to both the city and the NWQ.

The CRA, also known as a project area, sets objectives and strategies for the area’s development and authorizes the use of Tax Increment Financing (TIF).  With TIFs, the city freezes the amount of property tax collected for property owners within the TIF district to encourage development in an area.  As development grows and property values increase, the property owners still pay the same amount in property taxes to the city with the remaining funds going back into the CRA to fund additional improvements to the area.

Property owners that want to participate in the CRA will need to enter development agreements with the city.  Through and an interlocal agreement between the city and the RDA, the RDA would retain 75 percent of the city’s portion of TIF funds, which city officials anticipate could be as much as $175 million, of the projected $235 million collected over the project area’s 20-year lifespan if all taxing entities participate.

On Tuesday the council acting as both the RDA Board and council voted to enter development agreements with the quadrants two largest property owners, Kennecott Utah Copper and NWQ, LLC.

“We are delighted to have the opportunity to work with Salt Lake City on this truly remarkable project as we collectively look to differentiate the Salt Lake metro market as a world-class logistics center,” said John Birkinshaw, director of land planning for Kennecott-Rio Tinto, in a statement.

Earlier this year the city council approved the Northwest Quadrant master plan that encompasses most of the area between the Great Salt Lake and State Road 201 west of Interstate 215.  The master plan prioritizes manufacturing and light industrial use and resulted in the rezoning of most of the developable land from AG (Agriculture) to M1 (Light Manufacturing).  The NWQ’s remaining land, most of which is fragile wetlands, will be set aside as open space with an eco-buffer that will separate the wetlands from the developed parcels.  The NWQ will also include the state’s new prison that will occupy the northwest corner of the quadrant and will be completed in 2021.

In adopting the CRA, the council also included recommendations made earlier this month by the RDA’s Redevelopment Advisory Committee (RAC) that suggested that the city utilizes a minimum 10 percent statutory housing allocation to prioritize future housing and transit needs in relation to job growth in the NWQ.  The RAC recommendation emphasized affordable housing in adjacent neighborhoods and more housing along transit corridors that would connect to the NWQ.

Once city officials finalize their development agreements, Kennecott Utah Copper and NWQ, LLC will begin to market their land for development.  Additionally, the city will collaborate with landowners and the state of Utah to build out the needed infrastructure to accommodate new development.  The city expects to start construction on the initial road framework later this year.

“The Northwest Quad can easily become another key economic driver of development in the region,” said Councilmember and RDA Chair, Derek Kitchen. “Another benefit in developing the area is that 10 percent of revenues will be earmarked for affordable housing options elsewhere in our city.”