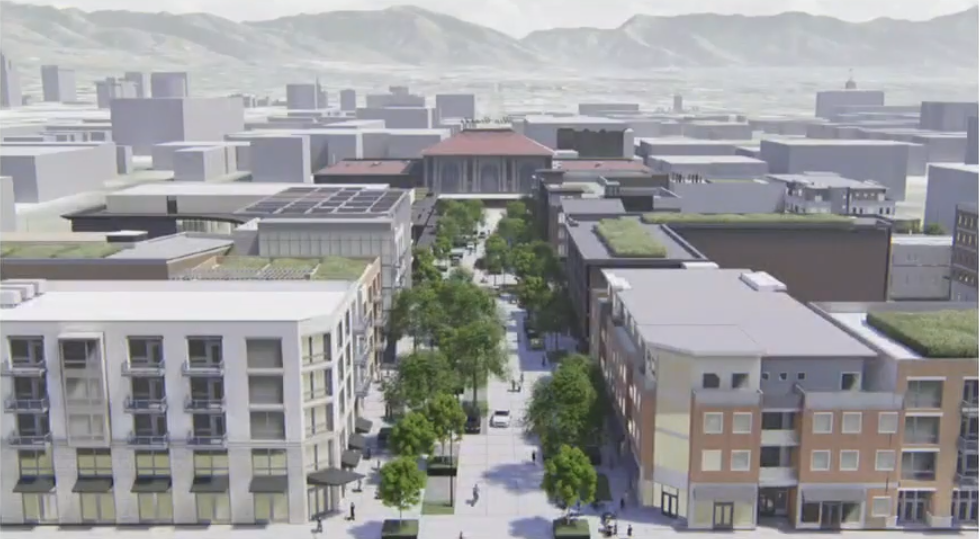 Salt Lake City Redevelopment Agency presented plans this week for what will be one of its biggest moves in the Depot District since the project area was created in 1998.

With only three years left before tax increment ceases to flow with the expiration of the area, the city may be closer than ever to making its long-awaited catalytic impact in the neighborhood.

That transformation began with the completion of the Gateway Mall in 2001. Built by locals the Boyer Company with major financial incentives from the RDA, the Gateway is in its second incarnation after suffering a steady climb in retail vacancies since the opening of City Creek Center in 2012.

The RDA’s Station Center concept has attracted interest but no commitments since being hatched in 2015. The Agency has divided its property portfolio in the two-block area into 6 discrete parcels. The area’s “infrastructure plan” includes building four new streets, aiming to create a more pedestrian scale on the city’s 10-acre blocks.

The city council, acting as the RDA’s board of directors, heard a presentation from the Agency’s designer for 300 South and Woodbine Court, Michael Budge of local firm Loci.

Woodbine is the north-south connector that RDA wants to bisect a re-established Pierpont Avenue on the north and Market Street on the south.

The price tag for the 300 South and Woodbine project is $8.9 million, which has been fully funded in the RDA budget. The entire four-street project is costed at $16 million.

The RDA plans to have Pierpont and Market be rebuilt by the developers of the adjacent properties, incentivized by a likely write-down of the property purchase price.

The new design, 50-70% complete, is a result of Loci being contacted by the city’s Engineering and Transportation departments with a request that they transform their previous iteration to be “less linear and car-centric.”

Loci altered their design to “prioritize pedestrians over vehicles.” They are using “trees and planting in the center of the street to act as traffic calming.”

Why cars at all?

The first question from the RDA board was about total pedestrianization. “Is there a reason we have to have cars on those two streets at all?” asked District 2’s Andrew Johnston.

Budge from Loci design responded “I really feel strongly that the automobile is something that we want ultimately to be able to go down through the space.”

“If we’re going to introduce retail on the ground level…I think it would be really hard for a retail space to thrive, especially deep into those blocks without having vehicle access to them.”

We asked Budge about any data that shows that retail sales are improved when cars are allowed on pedestrian-first streets.

He cited several recent studies that “Have proven that total pedestrian streets do well, and that people spend more money” there.

He then admitted that “It’s really the retailers that drive it” – meaning the perception of commercial tenants that most of their customers arrive in cars.

Budge mentioned a story in local lore about the opening days of the Gateway Mall. Rio Grande Street, its neighborhood-scaled throughway, was originally closed to cars. But after three days of sluggish retail sales “because people were walking in the middle of the street and not window shopping,” it was opened to automobiles.

Budge also mentioned customer preference: “People want to have the opportunity to find a parking spot near the front door.”