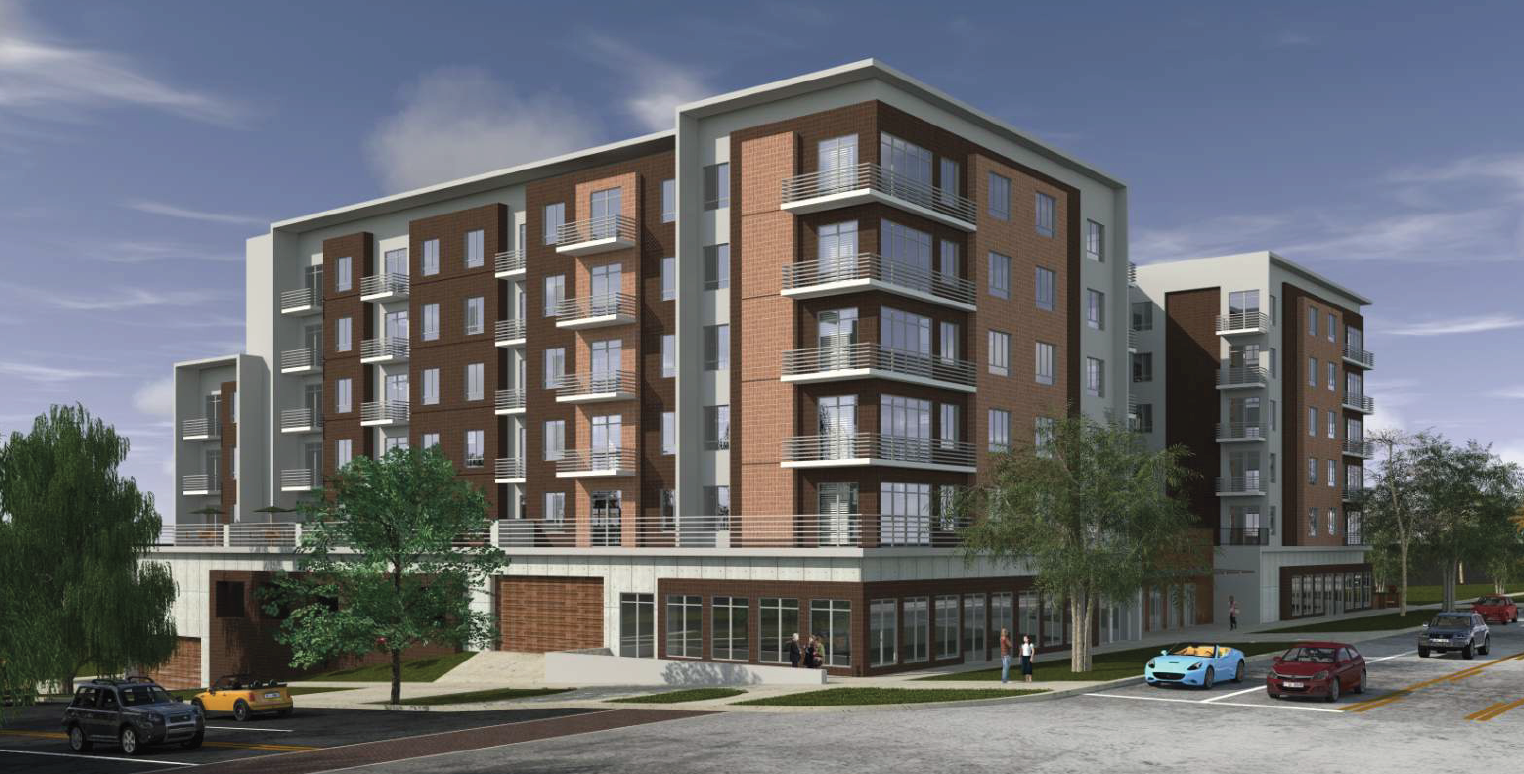 The vacant lot at the intersection of 500 East and South Temple will continue in its current state a little longer.  On Thursday the Historic Landmark Commission (HLC) again denied a request from Garbett Homes for new construction in a historic district and special exceptions to setback and height requirements.   Thursday’s meeting was Garbett’s third consecutive appearance before the HLC, and the second time that the Commission rejected the proposal.

Garbett Homes proposes building the Hardison Apartments, a mixed-use residential development at the south west corner of the intersection of 500 East and South Temple.  The most recent proposal included five floors of residential above ground floor commercial and two floors of parking.  The project would consist of 166 units and 5,515 square-feet of commercial space.

As was the case in the HLC meeting in January, the commission had issues with materials, massing, scale and height.  Several commission members acknowledged improvements in the project’s design, but still had issues with how close the project would be built up to the sidewalk, on a street known for its large setbacks.

“The design does not really respond to that location in the historic district,” said Kirk Huffaker, the executive director of the Utah Heritage Foundation.

The design of the Hardison Apartments has been a contentious issue for residents and members of the HLC.  In December, the commission criticized the project’s original design for trying to imitate the historic look of the South Temple Historic District.  The project’s architects, CRSA Architecture, returned with a more modern design but again faced criticism.

“There have been a number of mistakes on South Temple, those mistakes are quite glaring,” said a woman identifying herself as a lifelong resident of the Avenues.  “This is a very common design, there hasn’t been enough effort to make the design feel historic.”

“It (Hardison Apartments) would bring an end to blight and filth,” said the owners of Mrs. Backer’s Pastry Shop, a local bakery directly west of the vacant lot.

According to the bakery’s owners they have had to call the health department several times to have excrement removed from the lot that has been vacant for over a decade.  The owners also complained of vandalism and of calls to the police to have homeless communities that gather at the lot be removed.

After the public hearing, commission members seemed unsure of how to proceed.  One commission member voiced concerns that the group wasn’t providing specific instructions to the developer of how to improve the project.  That same member made a motion to approve the project but with the conditions that vinyl windows would not be used, enhancements be made to the ground floor commercial space and that air conditioners and other mechanical boxes wouldn’t be allowed on the balconies.  No commission members seconded the motion.  A second motion was made to deny the project based on massing and scale.  That motion passed nearly unanimously, with just one member voting against it.

Garbett Homes can either appeal the decision or submit a new request with the City.  The site is zoned Residential Mixed-use (R-MU) which allows for heights up to 75 feet.  The R-MU zone doesn’t require large building setbacks, but because the project is in a historic district the HLC must determine if the design and proposed setbacks fit the neighborhood’s historic character.