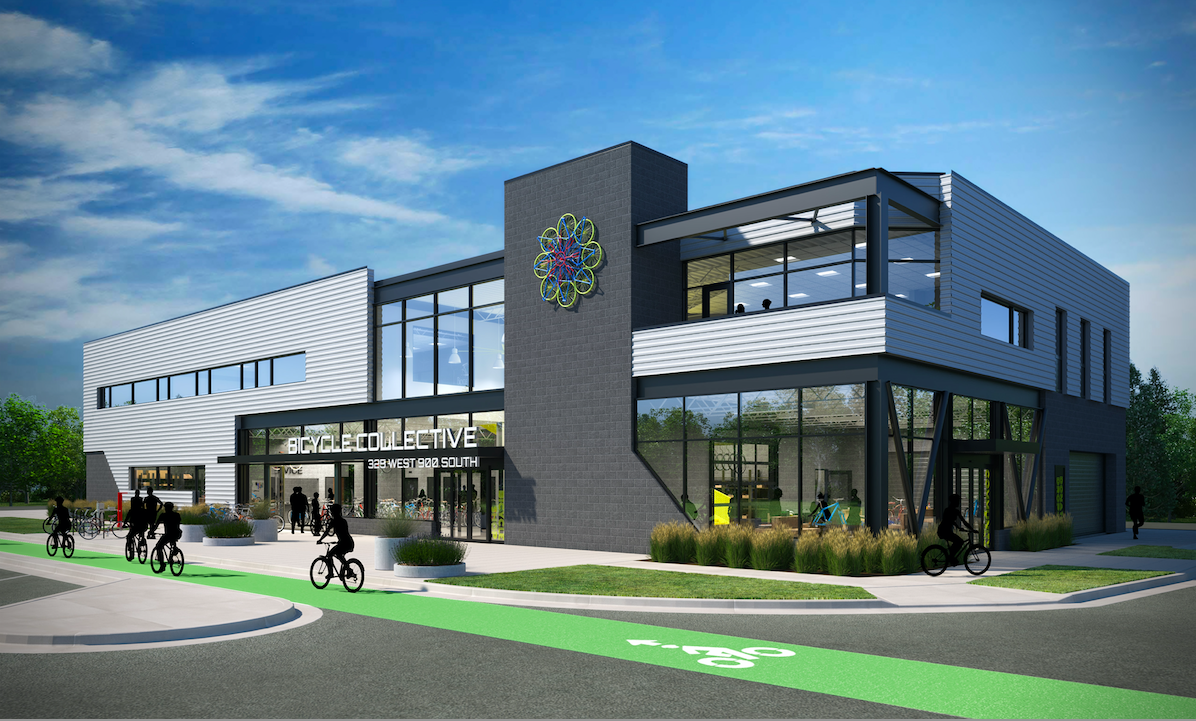 While the city-owned Fleet Block continues in limbo, Salt Lake City government was able to celebrate a victory with the community yesterday in the east Granary.

A groundbreaking event on a .26 acre parcel at 901 S Gale St brought together a sizable crowd. They listened to Mayor Erin Mendenhall, Council Member Darin Mano, and representatives from community partners poised to take ownership of city land to build a two-story HQ and community center in this still-barren corner of the Granary.

The Mayor, ultimately responsible for the vacant Fleet Block across the street, praised the Salt Lake Bicycle Collective for “supporting people from all walks of life in the community.”

The Bicycle Collective’s Executive Director Donna McAleer told the crowd that the vacant lot would soon host “sales of affordable bikes, provide bikes to those in need free of charge, recycle bikes, have a do-it-yourself space, store our bikes on our property and have educational programming.”

The local non-profit’s $5 million project won in 2017 a competitive RFP process for the land owned by the city’s Redevelopment Agency that was ultimately valued at $280,000.

The Bike Collective was assisted in their application by a neighborhood architectural firm, Atlas Architects, whose offices are just over a block away in Central 9th, across the great barrier of 300 West (owned and operated by UDOT).

Congratulations at the event were passed around abundantly, and included major local philanthropist foundations as well as local government. The city’s RDA, as project manager, stayed in the background as gratitude flowed from speakers at the podium to partners.

Yet from a policy perspective, it’s unmistakable that the RDA’s persistent vision and commitment of resources made this project possible. We’ll investigate that notion, as well as the origins of this local non-profit that made its quantum leap, in our story below.

At 901 S Gale St, the Bicycle Collective’s new 15,000 sf home will sit on the south side of a freshly-constructed segment of the 9-Line Trail.

For over a decade the organization has set up shop at 2312 S W Temple in South Salt Lake, an awkward but feasible location not far from the 21st South Central Pointe Trax station. They report that their functions have long outgrown the rented warehouse space.

The city’s RDA is betting big on the nonprofit, which “re-built itself” through the partnerships created in its capital campaign, according to Sean Murphy, co-chair of the nonprofit’s board.

Shawn McMillen, Executive Director of First Step House, spoke and claimed “every one of our clients knows about, and respects, the Bike Collective.”

His organization receives the second biggest number of free bikes from the Collective. Their other major partnering organization for free bikes is the International Rescue Committee (IRC).

Jesse Hulse of Atlas Architects, called by Mayor Mendenhall one of the “grandads of Central 9th,” rooted his firm’s partnership with the Bicycle Collective in the tendency for nonprofits to be permanent fixtures in neighborhoods while interacting everyday with the community.

Founded in 2002 as an outgrowth of Mayor Rocky Anderson’s Bicycle Advisory Committee, the organization is clearly on the right path, a co-founder told us at the event.

“It’s a great location, an up and coming area of the city, it’s connecting neighborhoods together, west side, east side, it will be a hub – right near TRAX and the 9-Line. And importantly, it’s back in SLC – to be downtown again,” Bicycle Collective co-founder Brian Price told Building Salt Lake.

When asked for the origin story of the organization, Price said he was able to file the 501(c)3 paperwork after holding a fundraiser to raise the $500 application fee – “a kegger at the warehouse” – his former residence on Richards St near the Ballpark.

He credited four other partners – Brenton Chu, Jason Bultman, Ed Whitney, and Jonathan Morrison with the founding, which as legend tells it, occurred at Downtown’s Junior’s Tavern.

The city’s role was key

Earlier this month the nonprofit was awarded an extra $500,000 – to cover rising construction costs – on a previously-approved low-interest construction loan from the RDA. In all, the public is counting on the Bicycle Collective to pay back a $2,250,000 loan at 3.66% interest in five years.

The Bicycle Collective’s Sean Murphy extolled the location, on the 9-Line and a link between the city’s east and west sides. It allows the Bicycle Collective to provide the “soft connective tissue” that enables people in the neighborhood to take advantage of all the “hard infrastructure investment” that’s been occuring in the Granary and Central 9th, he told the assembled.

Acknowledging the crucial role of the city in financing the project, Murphy admitted “with all the development activity in the Granary, frankly there was no way the Bike Collective was going to be able to buy a piece of land.”

Council Member and RDA Board Member Darin Mano (District 5), an architect by trade, told the audience that his history with this project went back a while. As a member of the RDA’s citizens’ Redevelopment Advisory Committee (RAC), he had reviewed its application long before he was asked to vote on it being on the city council.

The author of this article remembers being on the RDA Board that purchased this property at Gale St and 900 S, while in his time on the city council (2008-16).

The RDA has partnered with multiple nonprofit organizations looking to build facilities over the years.  In the immediate area of the Granary and West Temple Gateway (Central 9th), SpyHop, ArtSpace, Volunteers of America, and now the Bicycle Collective come to mind.

RDA Director Danny Walz, asked by BSL to describe the Agency’s development strategy as it includes nonprofits, told us,

“Nonprofit and community-oriented organizations provide immense foundational support in communities that have traditionally experienced disinvestment. They bring a level of stability and engagement into neighborhoods and business districts that is not always achieved by traditional commercial entities.”

He continued, “The reciprocal relationships nonprofits can establish with local communities through their service within them help create environments of stability and trust. These nonprofits also bring a wide spectrum of people into a neighborhood to activate it – ranging from employees, volunteers, clients, and community partners.”

That strength of conviction, institutional knowledge and continuity, seems to have benefitted a local nonprofit immensely. We will see if it catalyzes a neighborhood needing a master plan, resolve on the Fleet Block, and UDOT to stop treating its main street (300 W) as an Interstate on-ramp.

Editor’s note: This post has been updated to reflect the correct name of the First Step House Executive Director, which is Shawn McMillen.