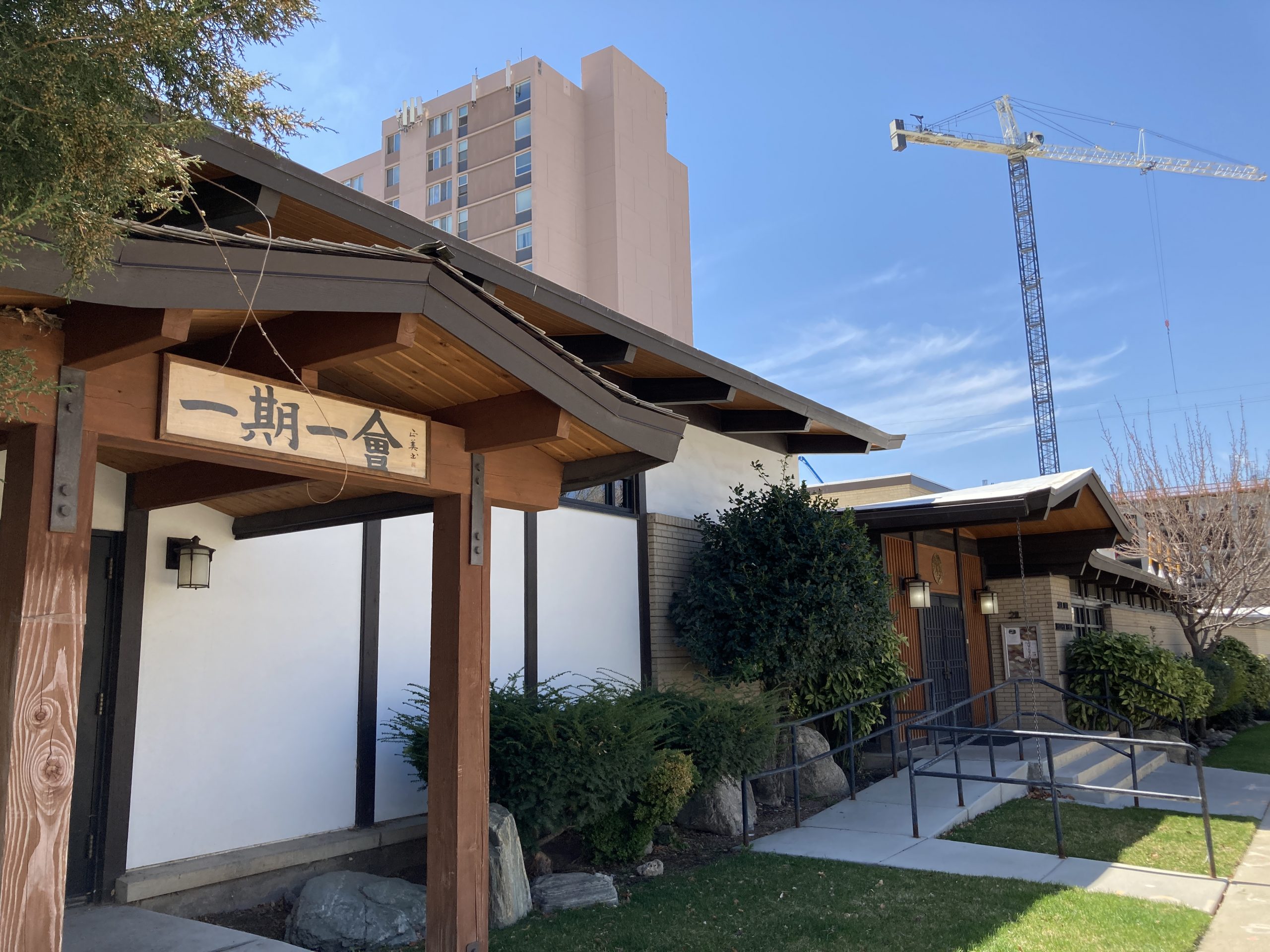 Salt Lake City’s Japantown – from the 1910s to 1950s a bustling ethnic enclave in west Downtown – was decimated in the mid-1960s by Urban Renewal. Where the Salt Palace convention center and the Utah Jazz arena currently stand, all that’s left of historic Japantown are two religious houses of worship, surface parking lots, and an affordable housing highrise.

Development is occurring all around.

Those two religious institutions are long-rooted on this block of 100 South between 200 and 300 West, their buidings dating to 1925. The Salt Lake Buddhist Temple and the Japanese Church of Christ each continue to hold vibrant, well-attended cultural festivals on the street each summer.

What’s the next step for the block’s future? Salt Lake City’s Redevelopment Agency (RDA) is ready to present its findings of a community engagement process with the city’s Japanese-American community.

The study, aimed at redesigning the city’s right-of-way on 100 South, was commissioned in 2018 with the Agency’s approval of the massive West Quarter project, which, when completed, will cover most of the 10-acre block to the south.

Locals GSBS Architects led the process and produced the city’s report, which will go in front of the city council, also the Redevelopment Agency’s board of directors, next week.

Does any semblance of Japantown have a chance of coming back? What is the role of city, county, and state governments in any attempt at revival?

The history of local and state government dancing with federal dollars for the “slum clearance” of Japantown in the 1960s is, seemingly, yet to be written. Agreed upon is the year the wrecking ball came, in 1966.

“The move to create the Salt Palace Convention Center decimated the two major blocks that had been the center of Japanese-American residential and commercial activity. Many of the businesses located on the blocks between South Temple and Second South and West Temple and 2nd West closed permanently. Only twelve – Sunrise Fish Market, Family Market, Aloha Cafe, California Market, Pagoda, the Natl. JACL Credit Union, The Utah Nippo, Sage Farm Market, Ami’s Book Store, Nisei Watch Shop, Uptown Service Station, and Pee Wee’s – moved to other areas of the city.”

All of them had no choice but to leave the Utah neighborhood they had made into a home in west Downtown.

By the 1960s, Japantown had deep roots in this part of Salt Lake City. As early as 1907 the blocks between South Temple, State Street, 3rd South and 7th West hosted a recognizable concentration of Japanese businesses.

Greektown and Little Italy, on the west and north sides of Pioneer Park, were apparently included in those boundaries.

According to to Haruko Terasawa Moriyasu, “Within this locality, noodle houses, hotels, rooming and boarding houses, bath houses, variety stores, barber shops, confectionaries, and tailors were started for the convenience of the Issei [first-generation Japanese].”

Daily newspapers (later thrice-weekly) in “Japanese vernacular,” the Utah Nippo and the Rocky Mountain Times, were distributed in Colorado, Utah, Wyoming, and Idaho from the 1910s through the 1930s.

By 1925, the Intermountain Buddhist Church and the Japanese Church of Christ had dedicated their present buildings on 100 South.

The design of the Buddhist “temple ‘was a compromise to make neighbors comfortable,’ says J.T. Hitaro, who grew up in Salt Lake attending it and returned here seven years ago to be its priest. ‘People were more comfortable with the conventions of a Protestant church design’,” the Salt Lake Tribune reported in 2003 (Aug. 30, Mary Brown Malouf).

The advent and aftermath of the Second World War brought major disruption and dislocation for Japanese-Americans, which included an influx of Japanese people and organizations to Salt Lake City from California, some from the internment camp at Topaz, UT.

Salt Lake City’s Japantown was demolished in 1966. In its place the city gained parking lots and the original Salt Palace arena and conference center, which opened in 1969. Owned and operated by Salt Lake County, it was replaced by the current Calvin Rampton Salt Palace Convention Center in 1995 which expanded west of 200 West in 2006.

The RDA, as part of an attempt to mitigate the effects of its CRA tax increment development of Block 67, now known as the West Quarter, began the $100,000 project in 2018 with consultants GSBS Architects.

The Japantown Design Strategy engaged the temple, the church, and the Japanese Community Preservation Committee on a project that was focused solely on the public right-of-way. Thus, the reconfiguration of car lanes, parking, as well as the needs of the annual festivals and walkability were at the forefront of discussions. The report recommends abundant streetscape elements aiming at cultural recognition and remembrance.

The process also led to the creation of a local management group and decision-making process for the Japantown community.

Funding for the street redesign and reconstruction is yet to be acquired. Part of the tax increment generated by the Block 67 development will go to 100 South.

At this week’s meeting of the Redevelopment Advisory Committee (RAC), Chair Brian Doughty asked if the West Quarter would have any street engagement on the project’s frontage on 100 South.

The RDA’s Corinne Piazza responded that “the RDA required the West Quarter development to do some design changes…so that this section of the development is required to have a setback and some outdoor activities like seating for their retail” on the Japantown Street frontage.

In addition, Piazza noted that the midblock walkway being constructed as part of the West Quarter will be able to connect to a future north-south walkway if the religious organizations choose to redevelop their surface parking lots on the south side of the street, adjacent to the West Quarter’s phase one, currently being built.

Redevelopment plans of the church or the temple?

Doughty asked, “Do they have plans to redevelop those parking lots?”

Piazza of RDA staff answered that “The Salt Lake Buddhist Temple is interested…we met with them about options and different tools they can utilize but I think overall…I’m not sure they’re exactly ready.”

It’s true, she confirmed, that “those parcels could really help activate Japantown Street, so as we’re improving the public right-of-way the private property owners could also add to that. I’d say that it’s on the radar but I don’t think it will be for a little bit. And the church is getting used to the concept and ideas of what they’d want to build” Piazza added.

“One of the ideas that the community is really passionate about is the idea of programming the street…and supporting Japanese-owned businesses and somehow getting them to that street. That’s why the management structure is so important.”