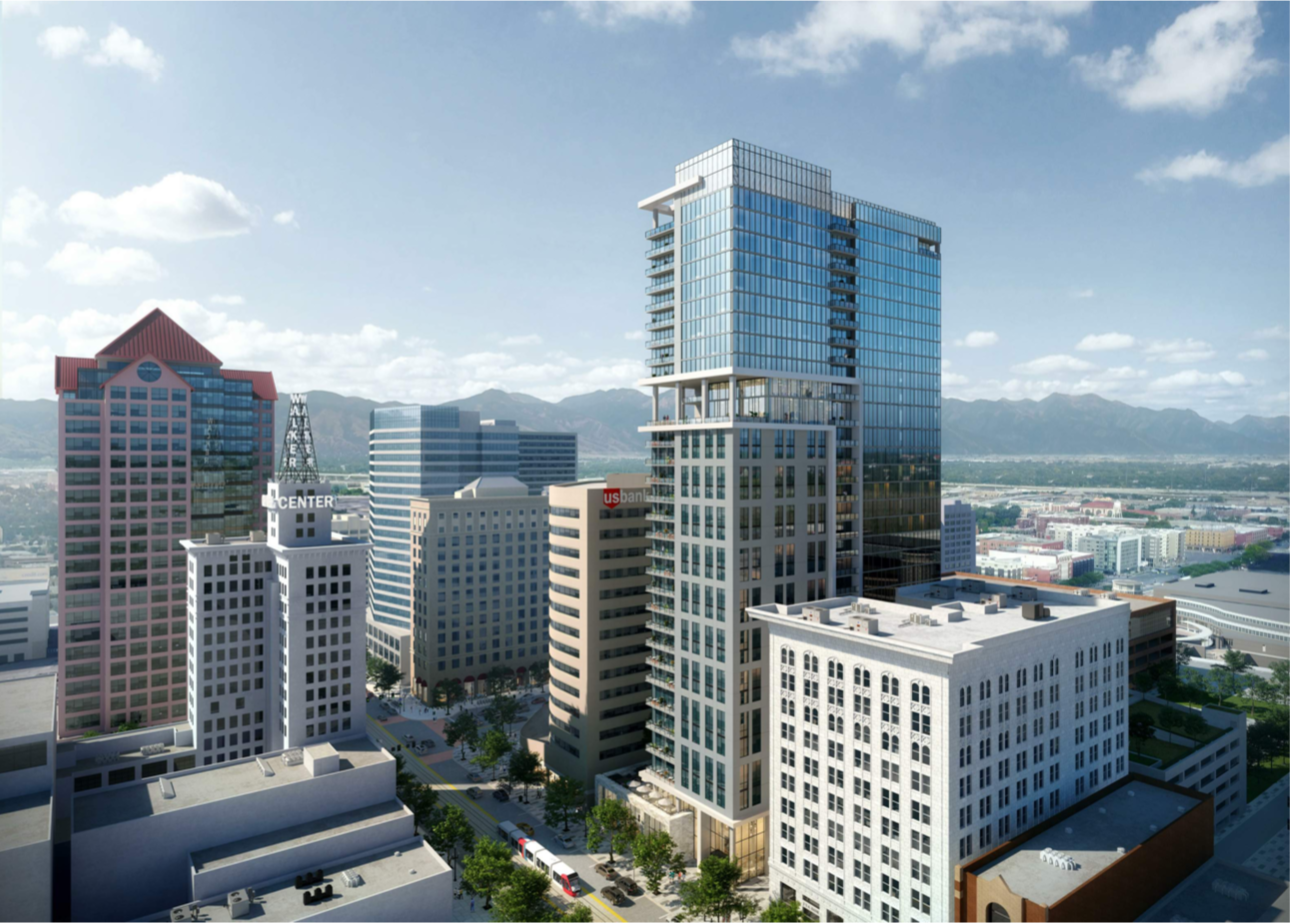 More than a year after the City Council agreed to give its historic theater on Main Street to developers, the new owners have released renderings detailing another building that will alter the capital city skyline.

The development will continue the ongoing and rapid addition of housing into Salt Lake City’s Downtown core, adding 400 apartments in a 31-story building that’s just shy of 400 feet tall.

Details for the proposed Main Street Apartments come after years of hand-wringing over the Utah Theater and the gift of the dilapidated building to the Hines development group.

Hines previously had released conceptual drawings showing a 30-story tower with 300 units. The new documents, submitted as a design review application for permission to build, provide many more details about what could be coming to the 100 South block of Main Street.

The apartments will include studios plus one- and two-bedroom units. Five penthouse suites will exist on the 31st floor.

40 of the new apartments will be affordable under the property transfer agreement the City Council, acting as the Redevelopment Agency Board of Directors, created in 2020. The affordable makeup includes 31 studio units, five one-bedroom apartments and four two-bedrooms, each with less space than their market rate counterparts.

The 24-foot ground-floor level will have 8,400 square feet for retail, plus a lobby and leasing office.

The RDA bought the theater for $5.5 million in 2010 from a local developer. It had tried to find a way to restore the theater and attract developers and tenants.

The space being added in part as an exchange for the council’s gift appears to be a park on top of a three-story parking garage and public plaza separating the new building from the Kearns Building on the south next door.

It appears the park will be open to the public willing to trek up to it.

Pantages Park, whose name is an homage to the theater the building will replace, will sit on top of the parking garage that will include 261 stalls on four levels (one underground) that are accessed from 100 South or West Temple.

The park will be accessible by stairs fronting Main Street through an “open, landscaped, wide-corridor plaza.”

“The tower, and associated residential lobby entry, is also setback from Main Street (~10 ft), aiding in massing relief to the street wall and providing directional cues to pedestrian circulation towards the corridor plaza and public park,” the developer wrote.

The corridors and park space are attempts to ensure the public is well-served and the building adds to the high walkability of Main Street at an important spot near the burgeoning Regent Street.

There may be a missed opportunity to extend the corridor farther west, linking up with a private right of way that lines up roughly with Regent Street and West Temple.

Standing tall (but not the tallest)

The roofline itself will be 368 feet plus a 24-foot rooftop mechanical unit that tops the building out at 392 feet. It won’t be the tallest building on the block. That title will remain with 111 Main, which houses the Eccles Theater and stands at 388 feet.

The Main Street Apartments will be among the tallest buildings on the city’s growing skyline once built, behind the Kensington Tower, Wells Fargo Center and LDS Church Office Building.

Hines is going through the city’s design review process so that it can far exceed the city’s 100-foot height maximum for mid-block buildings in the Downtown core.

The city’s Redevelopment Agency (RDA) has required Hines to build at least 30 stories high, according to the application. Salt Lake City has also been discussing whether its height restrictions in various neighborhoods, including Downtown, are high enough.

Read the full plan for the Main Street Apartments here.