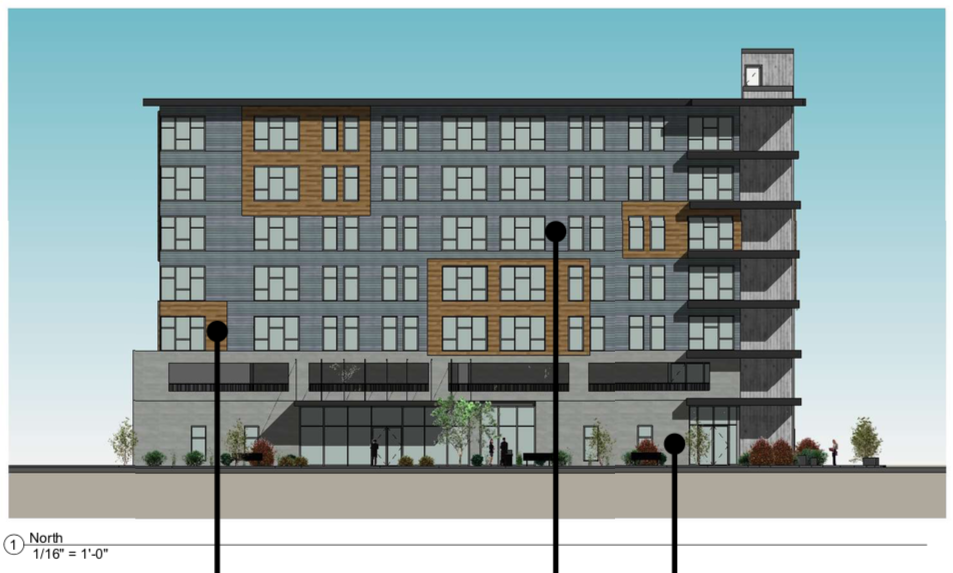 At an important corner in the Fairpark neighborhood, 900 West and North Temple, another auto-oriented business is giving way to housing.

Shamrock Communities, based in Plainfield, IN, is advancing their plans for a 120-unit, market-rate, podium plus five building at 875 W. North Temple.

It sits less than a block away from three residential projects currently under construction and another large one proposed across the street on the Walgreens site next to Rancho Market.

Previously hosting a Firestone tire sales and service center and just half a block from the Jackson/Euclid Trax station, the project has finished its environmental remediation, necessitated by its previous life as a gas station, a representative from Shamrock told us.

The project is within walking distance of numerous amenities, including restaurants, a cleaners, a grocery store, and the newly-paved Folsom Trail.

It’s also in one of the city’s areas historically most blighted with drug trade and homelessness.

The parcel, .489 acres at the SE corner of North Temple and 900 W, has sat post-demolition for nearly six months while undergoing environmental cleanup.

Developers note that they will be removing 15,000 sf of surface parking from the area. This helped their TSA score, which to their estimation, arrives at 212, well above the city’s threshold of 125.

The developer committed to “providing transit passes to all of our residents,” which also scores development points with the city. The passes must be provided for a minimum of three years, according to zoning code.

The project’s ground floor includes a private fitness center and coffee lounge, as well as retail space of 1745 sf on North Temple. In renderings, the 900 West frontage appears less friendly from the sidewalk.

•74 parking stalls (structured on first and second floors), a .6 to 1 ratio

Editor’s note: This post has been updated and corrected. OZ8 Opportunity Fund owns the property to the east of 875 W North Temple, but is not involved in this project.