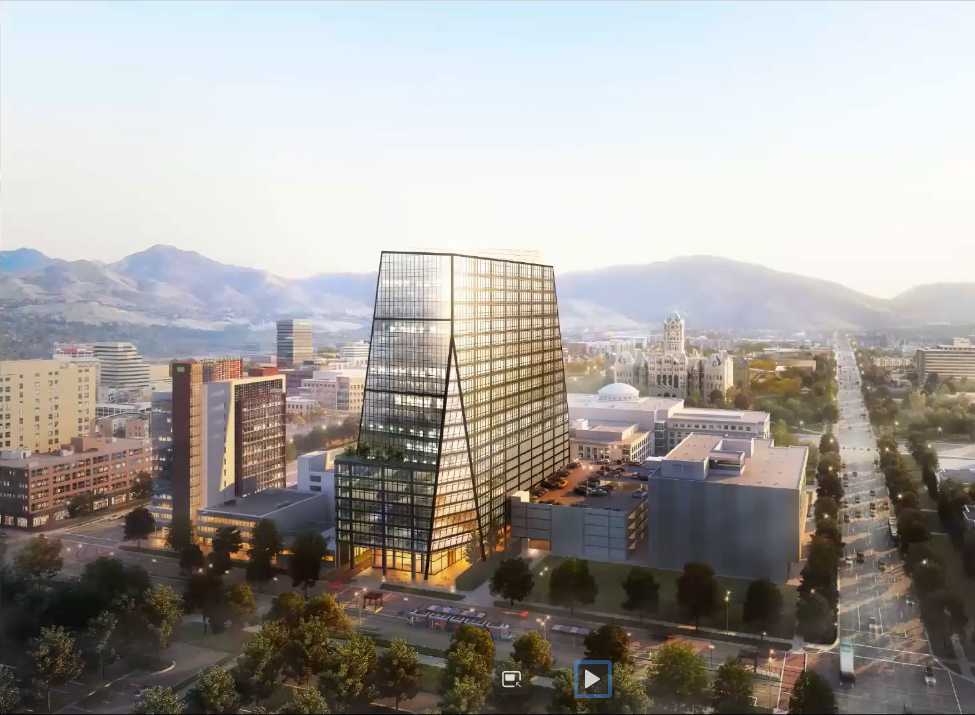 Salt Lake’s latest architectural statement will sit south of the mid-century modern First Security Tower (now Ken Garff) and north of the vacant lot that abuts the rear of District Attorney’s building to the west that fronts 500 South. It boasts a location immediately adjacent to the Courthouse Trax Station.

These are in addition to a number of new co-working spaces trying to pull small and midsize companies away from traditional office lease arrangements in the post-Covid remote-work era.

JLL and Hines have entered into a long-term land lease with Salt Lake County, which owns the parcel. On the property to the south, the county has also offered a land-lease to locals PEG Development, who plan to build a residential tower on their new Main Street frontage.

Sundial’s name comes from the inspiration of Sundial Peak in the Wasatch Mountains, as the architects, Pickard Chilton, aim to offer the viewer a different building when seen from different angles.

The developers plan eight stories of parking, and small pockets of plaza space to the east and south of the structure that will help “bring the outdoors inside.”

It aims for LEED and Energy Star certifications.

The building will also offer outdoor decks on the 9th, 19th, and 23rd floors. The structure is a parallelogram, which, while offering unique architectural angles, will still feature the floor space efficiency of a rectangle, according to JLL representative Jillian Johnson.

She also hinted at Hines’ strategy to pull in out-of-state tenants. Hines hopes to start new tenants in the Kearns Building and Cottonwood Corporate complex, “and as the Sundial Tower comes to fruition, we’ll be able to transition them [there],” she told a group of real estate colleagues at an early May Zoom talk.

JLL and Hines expect a year in planning, plus two years construction. That puts ribbon-cutting at early summer 2024.