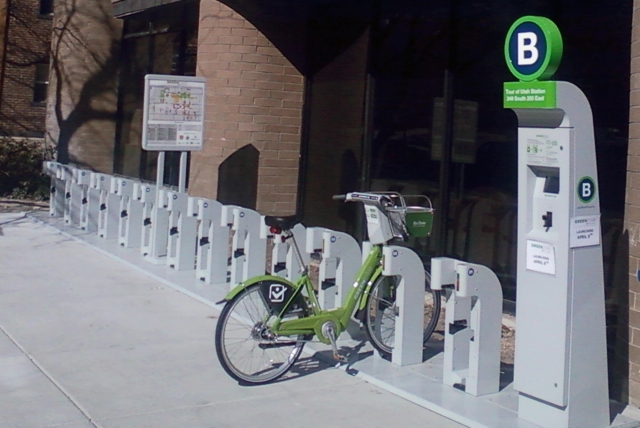 Bicycle usage is continuing to grow in Salt Lake.  The folks at GREENbike Share Program, along with the Downtown Alliance, announced on Tuesday the expansion of the popular bike-share program to other areas of the city.

The 16 month-old bike-sharing program has expanded from its original 10 stations with 55 active bikes to 20 stations with 160 active bikes.  The expansion includes eight new stations that opened this month with another six of the most popular stations being expanded to accommodate increased demand.

“Bike-share expansion means there’s even more non-motorized travel options for citizens, which not only helps better our air quality, but I believe helps build a healthier, more connected, and socially-invested community,” said  Stan Penfold, Chair of the SLC Redevelopment Agency in Tuesday’s press release.  “We’re thrilled about the program’s success, and hope to see more stations and GREENbikes in the years to come.”

Bike sharing programs have struggled in other U.S. cities.  New York’s Citi Bike program has been losing money,  while the city of Philadelphia has spent years trying to launch a bike-share program that has had its launch date repeatedly pushed backed.

GREENbikes success is partly attributed to contributions from both the public and private sectors.  GREENbike’s 2014 capital expansion is being funded through grants from the Wasatch Front Regional Council, Salt Lake City Redevelopment Agency, Utah Department of Transportation and the Utah Clean Air Partnership.

Salt Lake City has been slowly building a reputation as a bike-friendly city.  In 2012, Bicycling Magazine ranked the city as the 26th most bike-friendly city in the country.  According to a 2013 study by the League of American Bicyclists, bike commuters make up 3.5 percent of all commuters in Salt Lake, much higher than the national average of 0.6 percent.

But there is still a lot of room for improvement.  Walkscore.com gives Salt Lake City a Bike Score of  68 out of 100.  According to the website, a score of 68 recognizes that there is existing bike infrastructure, while a score of 70 or higher classifies a city as “very bikeable.”

Salt Lake is working to make the city more bike-friendly.  Construction will start this summer on street improvements for downtown sections of 200 West and 300 South.   Protected bike lanes will be installed along 200 West from North Temple to 900 South and along 300 South from Pioneer Park at 300 West to 600 East.

The bike lanes will be separated from auto traffic by moving curbside parking toward the center of the street and installing a physical barrier between the curbside bike lane and parking and auto traffic.   Traffic speeds will be reduced as well to make biking safer along these two corridors.

The 200 West protected bike lane will connect to the 9 Line Trail that includes a buffered bike lane from 200 West to 700 West and a bike trail built along an abandoned rail corridor from 700 West to Redwood Road at 900 South.