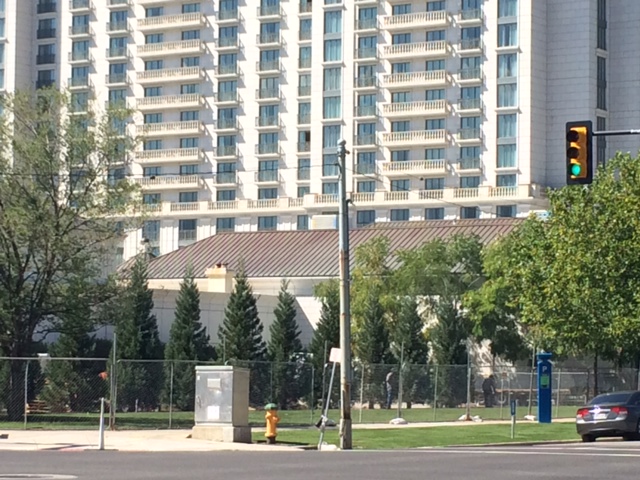 A small surface parking lot framed by newly planted pine trees is the end result of one of Salt Lake City’s most prominent land rights battles. The lot on the corner of 500 South and State Street in downtown Salt Lake City was part of a two decades long battle between the deceased Earl Holding and his Grand America Hotels & Resorts and the Flower Patch, a chain of flower shops founded by Greg Parrish.

The land battle began in the 1990’s in anticipation of the 2002 Salt Lake Winter Olympics, Earl Holding intended to develop the entire block between 500 600 South and Main and State Streets for a large luxury hotel. While much of the block was underdeveloped, the Flower Patch was well maintained and business was good.

In 1994, the Salt Lake Redevelopment Agency declared the block surrounding the flower shop as blighted. Earl Holding had used his influence to get the blighted declaration so that he could acquire the entire block for redevelopment.  The owner of the Flower Patch property fought the RDA blight declaration and won.  The Flower Patch was able to stay open and Holding would have to build his hotel around it.

After the Flower Patch’s win with the RDA, the owner then tried to bargain with Holding to allow the sale of the Flower Patch property and construction of executive rooms on the site if Holding would allow a flower shop in the new 24-story hotel.  The owner’s suggestion was rejected and the property was sold in 1999.

The land battle came to represent the frustrations between small and large businesses, eminent domain and land owner rights.  The flower shop became of symbol of the little man as it stood surrounded by a large luxury hotel.

In 2013, Parrish again sold the Flower Patch but this time to Grand America Hotels and Resorts, its former foe.  The land acquisition was surprisingly uneventful considering the years of fighting between owners.   The flower shop, a resilient building that refused to leave, was demolished in early August by the hotel’s owners.

The former flower shop, a reminder of land conflicts in a rapidly changing city, is now gone and instead of executive suites, pine trees and parked cars fill the space showing that urban renewal can be complicated and the little guy doesn’t always win.