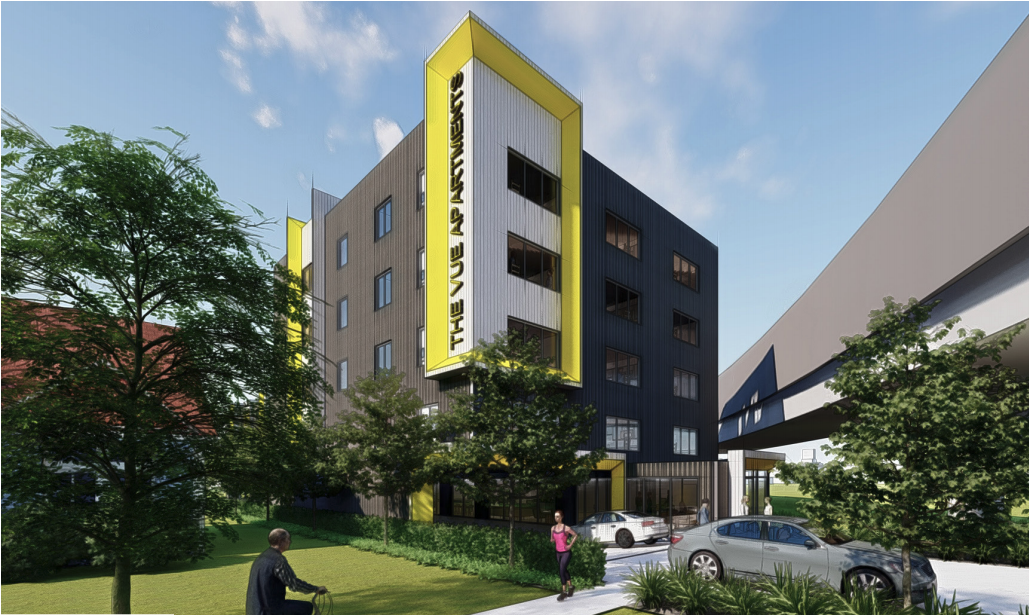 Developers last week released plans for a new apartment building that will continue the rapid growth of high-density housing near the North Temple corridor of Salt Lake City’s west side.

The proposal itself wasn’t particularly unique. Transit-area zoning allows for high-density projects, and the area’s recent status as an Opportunity Zone has made for easier financing and has flooded the area just west of Downtown with similar new housing proposals.

What is unique is that the 218 units — all of them affordable for those making 60% median income — will sit on property primarily owned by a former city councilman who, while on the council, vehemently opposed low-income projects in the area.

The Alta Vue apartments would stretch along 800 West between 144 South and 200 South. They’d be built in a five-story building over underground parking. The building would replace single-family housing on a few of the eight lots that would be combined as part of the project.

Several of those properties are owned by Kyle LaMalfa, a former west side councilman from District 2 and husband of Mayor Erin Mendenhall.

LaMalfa spoke during his time on the council about what was perceived to be a lack of geographical housing equity in the city, with low-income housing for the west side and high-income for the east.

The councilman wasn’t alone. Opposition to below-market units being built on the west side is still strong, illustrated by community leaders like Maria Garciaz, CEO of Neighborworks Salt Lake, an affordable housing developer and rehabilitation non-profit located in the Guadalupe neighborhood.

She told us, “I disagree with the city encouraging more below market rate housing on the west side. The challenge is we need more moderate rate housing. We have either very low income or luxury multifamily units. It is the population between 80% and 120% that is often left out. It is easy to build low income housing and density where you don’t live.”

Several sources spoke on background to LaMalfa’s vehement opposition, which dovetailed with that of Garciaz and the Neighborworks Salt Lake board of directors.

Mike Akerlow, who was the Director of Housing and Neighborhood Development during most of LaMalfa’s tenure on the council, remembers the time vividly.

He told us that most of the opposition from the community came from Garciaz, the Neighborworks board, and LaMalfa.

“Fundamentally, we didn’t disagree with Kyle’s advocacy for more geographical equity — he’s absolutely right,” said Akerlow, currently the CEO of the Community Development Corporation of Utah (CDCU). But a series of structural incentives strongly encourages affordable units to be built where they already exist.

CDCU’s recent experience getting a project off the ground in Sugar House is instructive: tax credit applications are favored if the land is not expensive and proximity to fixed transit is crucial. Thus areas like the North Temple corridor, exactly where LaMalfa’s properties are located, become the only places projects will pencil.

Others who spoke on background noted the apparent change from LaMalfa’s time on the council to when his and neighboring properties will be developed into entirely affordable housing.

In hindsight, the city was on its way to the current severe shortage of housing, particularly rentals that are affordable for those making less than median income, and any units could have helped.

LaMalfa, who is also a Building Salt Lake supporter, declined to comment for the story.

Did he have a point?

Units affordable to those making 60% AMI and below are in particularly short supply, and the project itself promises to provide a space for those making around $35,000 a year at the doorstep to Downtown and among a transit-oriented neighborhood.

The city’s inability to reach its stated goals of mixed income housing in every neighborhood persists today.

Indeed, research generally shows that mixed-income neighborhoods have positive effects on the people living there. But some neighborhoods are either not attracting or outright oppose lower-income housing, or both.

The City Council district that includes Downtown has seen the lion’s share, with the districts sharing the North Temple corridor following behind.

That apparent inequity persists even among council members today.

“In general, I am in favor of affordable housing,” said Andrew Johnston, who replaced LaMalfa to represent the west side Council District 2. “I still feel strongly we need some type of inclusionary zoning city wide to avoid congregating them west of State Street.”

“Even 60% AMI isn’t that cheap but would be a good addition,” Johnston added.

Low-income units as of September 2020

Add these proposed new units to the nearly 2,300 that were proposed in 2020 alone along the North Temple corridor.

It was a year in which builders started capitalizing on high-density transit area zoning and easier financing through the area’s status as an Opportunity Zone.

“This project has gone through many iterations and is now to a point where it can proceed with all appropriate speed for approval and construction,” the developers, Alta Bay Capital, wrote in their design review application. “The building has been designed to meet administrative approval requirements for the TSA Zone.”

While LaMalfa’s involvement is unclear, he worked for years to win approval to vacate a portion of 800 West, near where it dead-ends into an interstate exchange between I-15 and I-80.

The renderings show the land will be used in an area that includes a dog park, paths and planters. The park will not be open to the public, according to Jereme Thaxton, CEO and Founder of Alta Bay Capital.

“Though I will admit we have been trying really hard to find a way to make these amenities public, it just opens us up to too much liability and also exposes our residents,” Thaxton said. “I have dogs myself and fully understand the benefits a dog park could provide the community.”

Alta Vue parking would be accessed off 200 South.

It would include 131 underground parking stalls, or 0.6 stalls per unit. It’s about a 10-minute walk to the Jackson/Euclid TRAX station from the property.

The property makes up the southwestern part of the city’s transit station area urban neighborhood zoning area, which is on its way to reorienting from primarily single-family housing mixed with commercial to one with more mid-rise and mixed-use apartments.

The zoning established for much of the corridor will lead to more development that “generally happens as infill on vacant parcels or redevelopment of underutilized parcels.”

The zoning type allows for relatively quick development once builders can secure financing, if they’re not requesting other changes from the city.

Under the scoring system for TSA zoning, the Vue developers say they’ve met the requirements for quick review and approval before construction.