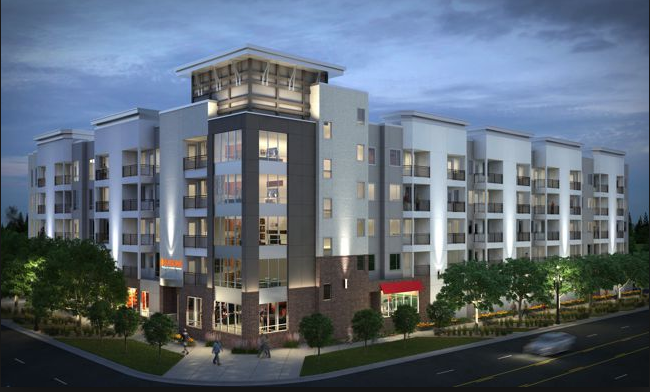 Framing has begun for the Seasons at Library Square apartments at the corner of 500 South and 300 East.  The two-level parking garage has been built with the first residential floor being framed.  The five-story apartment build will consist of 119 residential units, a fitness center, movie theater and a clubhouse.  Missing from the project is ground-floor commercial space.

A mixed-use project would have been appropriate for the site.  The building is located at an important intersection, directly across the street from Salt Lake’s new Public Safety Building and kitty-corner from Salt Lake City’s Main Library.  The project is also a block from the Library TRAX station.

Seasons at Library Square Apartments will be built up to the sidewalk,  which will help the project bring energy to the street level.  Also at 5-stories the projects height fits the mid-rise trend emerging along 400 and 500 South.

The Library Square project is one of three projects currently under construction along the 400 and 500 south corridor between State Street and 900 East, with another four projects proposed.

The other two projects currently under construction, the nearly completed Newhouse Apartments and the Encore Apartments, also lack ground-floor retail.  The Encore project is in the early stages of construction and could still modify current plans to include ground-floor commercial space, but most recent plans show residential units over an underground parking structure.

Of the seven projects planned for this important transit corridor, only two have included space for ground-floor commercial, the Hardage Group project at 400 South and 800 East and a project planned for 400 south and 400 East (formerly a Sizzlers restaurant).

Mixed-use projects encourage residents to walk or utilized public transit.   The 400 south corridor is evolving from busy state road littered with fast food restaurants and suburban style development into a transit orientated, walkable community.  But for the neighborhood to maximize its potential developers will need to embrace mixed-uses that would encourage more pedestrian activity.

The developers of Seasons at Library Square have missed an opportunity to further strengthen the urban energy along 500 South.  The Salt Lake City Main Library is one of the most frequented places in Salt Lake, and the Library Square project fails to capitalize on its location.  What could have been an exciting mixed-use project next to two of the most architecturally unique buildings in Salt Lake, will instead be another mid-rise apartment building that does little to benefit the neighborhood apart from adding more residents.